Many Faces Of The Proboscis Monkeys 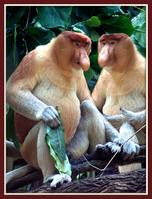 This Saturday, my company's sports club will be going for a short tour to Klias, which is about 2 hours' car ride to the south of Kota Kinabalu City. It is one of the many tours we have here in Sabah. People from all over the world come to Sabah to catch a glimpse of the proboscis monkeys in their natural habitats.

Unfortunately, I will be going for a treasure hunt in Kuala Lumpur over the weekends. So I won't be able to join them. To those of you who're wondering how this creature got its name—proboscis monkey—it won't be difficult to understand once you get to see its prominent nose. I used to think that it's some sort of freak mistake by God when creating this species. You can read more about this animal here. And then you should make it a point to come to Sabah to see them for yourselves one of these days.

Yeah, those Japanese are full of ideas, aren't they? I was still shaking my head a long time after I picked up my jaw from the floor.

I wonder if the little girls are traumatised by those gigantic artworks.

Don't you just love the internet? You get to learn a whole load of foreign cultures and traditions.

And I am still shaking my head now...