Homosexuality is a very difficult topic and has been the subject of many discussions and debates in many blogs that I have visited. I find it interesting that homosexuality is a sin in religions. I'm not very well-versed on the reasons for it being a sin, although I have heard plenty from the people who claimed that they've studied the holy books.
For example, one of the reasons given to me was that if homosexuality is condoned by God, then the human race will gradually become extinct because reproduction can't happen. However, I haven't myself study those holy books to verify the truth of the matter. At any rate, I think that was a lousy reason because although I don't have the statistics, I'm absolutely convinced that the vast majority of the human race are heterosexual. We have plenty of opportunities for reproduction there.
I'm a non-believer of religions, but even if I were a believer, I doubt that I can accept that homosexuality is a sin, regardless of what's contained in the holy books. For I'm convinced that in most of the cases, homosexuality is not something that anyone can control—it is something one is born with.
If God is truly loving and forgiving, I think He would not punish any of us for something which we are born with, and beyond our control. I'm not playing God here; and I can accept that I may be wrong. If, for example, I were born a retard or mentally-challenged, is it then my fault if I can't understand religions? The answer, I was given to understand, is no, it's not my fault. And I would be excused!
However, homosexuality is a bit different from a retarded person. The mind is sane and in all other aspects, the person is normal. The only problem is that he or she is attracted to the same sex as opposed to the opposite sex.
It has been argued that homosexuality is not something that is beyond control, unlike someone who's insane. One can refrain from having sex with anyone of the same gender. A lesbian, for example, can still have intercourse with a man and produce offspring. I suppose there is some truth in that, but the heart is empty. The heart of a homosexual person can only love a person of the same gender.
It is very easy for the vast majority of the human race to look at the minority homosexual people and say that they are sinful for being homosexuals. They would say that the gays should control their tendencies; that they are in fact not qualified to experience love. And even if they did fall in love, they should not act on it!
That is why when a young Malay, Muslim man made a daring confession that he is gay, the comment from the Mufti of Perak was:
"Since he acknowledged himself to be a Muslim and a Malay, he should not have made such a confession... In truth, he has derided his own dignity and Islam in general." [The Star]
I think it is easy to say that it's all in the mind; that gays should resist their feelings! But it is easy to say if one is not oneself experiencing it. Maybe if the Mufti himself were gay, he would have a different opinion about being gay, I don't know. For only then will he be in the position to know what exactly is going on in the mind and heart of a homosexual.

It's probably psychological, but have you ever found yourself in one of those situations when you're rushing for something important, and it seemed like the whole world was conspiring to slow you down? Everything around you seemed to have frozen! The bumper-to-bumper traffic jam which took a million years to move an inch; and when you arrived at the many traffic lights, all of them were red? And then when you have somehow escaped from the traffic jams, everyone around you seemed like they're absolutely determined to drive as slow as possible?
Well, today I experienced one of those moments. And it was quite a challenge!
And of course as Murphy's Law would have it, of all the time in the world, that was the one time when I was running low on diesel. So off I went to the nearest fuel station, only to find an exceptionally long queue. I waited patiently and saw all my hair gradually turning white in the mirror. Finally, it was my turn!
It was a self-service station, so I had to frantically wave from the pump to the attendant at the cash register who was busy playing with her cellphone to start my pump flowing.
After I was done filling up diesel into my tank, I walked over to the cashier to pay. I asked for a receipt, and she began the Herculean task of writing out one. I stood there watching her in action.
This was the receipt: 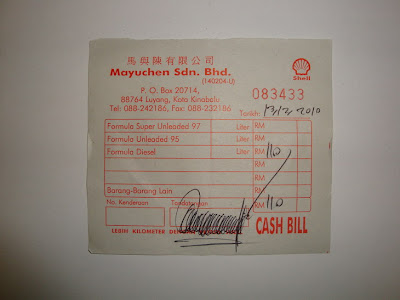 It was perhaps a mere few seconds' affair, but, y'know, when you're rushing, it felt like she took an eternity to sign the damn receipt. Amazing the amount of strokes in some people's signatures. I'm thinking if they're not careful, they can make me lose my head—I may just end up killing somebody because of seeing those kind of signatures! 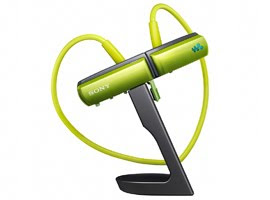 Recently, I bought a neat Sony walkman—the Zappin NWZ-W252. The above is how it would appear when attached to the USB stand. But when in operation, only that green portion (mine is black) will be attached to the ears. There are no wires hanging around, so I kinda like it.
I tried my walkman a couple of times, and ended up running with it during the recent Penang Bridge International Marathon. I was worried that I would be struck by lightning on the bridge during the thunder storm, but luckily that did not happen. And yes, it is also water resistant.
Dr Peter saw the walkman on my ears during the race, fascinated. After the race, he bought one too, saying that he wanted to "reward himself for his efforts", referring to his success in beating me! He chose a white-coloured walkman.
Today I went running again at the Likas jogging track. It was already quite dark when I arrived at the track. Dr Peter was also there. So I ran together with him. Both of us had our walkmans on. But because of habit, we were still talking to each other as we were running.
I wonder what did the rest of the runners think about these two old men shouting to each other about the Hong Kong Marathon.
By the way, I clocked my fastest 10-lap (approximately 10km) workout today, finishing in 52:35. I'm thinking if I tried hard enough, I might be able to achieve even better times. But for now I'm very happy to reach this new frontier.