The last few months have been very exhausting as I was training for the Ironman Western Australia (IMWA). I have done an Ironman race at Lake Taupo, New Zealand, in March last year which I finished in about 15:32. That was a lonely trip for me. I was supposed to have raced together with my friend, Teo Chen Lung. But a bike crash a few weeks before the race forced Teo to withdraw from the race. I felt like I owed Teo another shot to race against me, and so both of us registered for the IMWA.


Going into the IMWA, I trained an average of about 10-12 hours per week, and then up to about 13-14 hours per week during the last 6 weeks before the race. However, if I had the time, I would have liked to train at least 15 hours per week, and possibly up to 20 hours peak before tapering for the race. Teo was able to log more training hours as he was training mornings and evenings.


We had a bet between us—whoever lost the race would have to buy the winner dinner. Now if you had known Teo, you would know that he only bets when he is at least 90% sure that he would win. I think he was confident because of several factors. He swam several 4km sessions in the pool in his wetsuit before the race; he logged more training hours; and I have a shrewd suspicion that he knew that he would be able to finish the IMWA in under 15 hours. That is of course at least half an hour faster than my 15:32 finish in New Zealand.


But a few months ago, I had a plan. I wasn't sure if it was a sound plan, but I felt like it was worth the gamble. Because of time constraints, I knew that I couldn't train all 3 sports fully, so I would have to prioritize. I decided to focus on the bike, because to me the bike leg is the key for the long triathlon. That is a little strange because swimming is my weakest sport. Logically, I should have spent more time in the pool, but I decided otherwise because not only is the swim the shortest of the 3 disciplines, but I reckoned that although I was gonna be slower than Teo, it would be just a matter of 5-10 minutes. If my bike is strong enough, I can very easily gain back the time in that leg of the race. The mission at IMWA shall be, first and foremost, to achieve a personal best (PB), and secondly, to prevent Teo from beating me.


And so Teo and I found ourselves at the Busselton Jetty on 6th December on a cold windy morning. That was the start of a day-long torture. Teo reminded me one last time that we had dinner at stake for the race, and we even shook hands on it.


At first, I had intended to swim leisurely and conserve energy for the bike and run legs. But that was wishful thinking. The sea was so rough that morning, I struggled almost throughout, perhaps consuming several litres of sea water in the process. Before the race, Teo said he would expect to finish the swim in about 1:30-1:35, but I said I'd probably take at least 1:40. Well, I was still struggling at 1:40 into the race, and I felt like I was hardly moving forward at all. In the end I took about 1:55 to finish the swim; that must have been the longest 4km swim for me, ever.


In my mind, I was thinking Teo might have finished his swim in about 1:40, and the thought that I was behind by a margin of 15 mins was quite heart-breaking. I got into Transition 1 (T1) and spent some minutes struggling out of my wetsuit and then changed into my bike outfit. Then a quick visit to the toilet. I spent a total of about 10 minutes at T1.


As I started the bike leg, the thought of the hard work catching up with Teo began to sink into my head. I remained calm, however, and stuck to my game plan. In terms of cycling abilities, I can ride at an average of 33kph on flat roads these days, but because this was an Ironman race, I had to conserve energy. But still, I had to make up on lost time during the swim. Thankfully, we had tailwind for the first 20km or so of the bike leg, and I took advantage to ride a little faster. And then shortly after an hour later, I had a pleasant surprise. "Is that Teo up ahead? Well, what d'you know, that is him!"


After I overtook Teo, I began to ease back on the pedals. There were several turning points, and at each turning point, I could judge how far ahead I was. Things went as I had planned, I was increasing the gap between Teo and I. I could have easily declared that the bike leg was perfect, except that it's a little boring, and the headwinds at several sections were quite punishing. At the last turning point, I saw Teo again, and I estimated that I was about half an hour ahead of him. I merely maintained my speed for the remaining 20km or so. I was so happy that the puncture god decided to be kind to me!


At T2, I spent another 10 minutes. At that point of the race, I knew that I had achieved my PB even though I still had a full marathon to run. The abrupt shift of focus to ensure that Teo won't make a comeback. Half an hour's buffer against him may seem comfortable, but things can change quickly in an Ironman race! I kept a cool head and was down to a slow jog. I was tired, of course, but all I had to do was to be ahead of Teo!


The run leg of the race was made up of 4 loops along the beach. Very simple, but can be boring. Teo had said that he expected to finish his run in about 6.5 hours, but of course that was rubbish. That kind of trick from him can no longer work on me these days! As I made the first turning point, I saw Teo on the other side of the road. We were both walking by then, and he tried so very hard to show that he's in trouble. He said he could no longer run, felt like vomiting, suffering pains all over. I played along and said I felt exactly the same way too. After about 50metres, when I turned back, I saw him running, of course, and I started running again too.


However, during the second turning point in the second loop, I realised that Teo had gained back about 10 minutes, thus indicating that he had been running a fair bit. So much for 6.5 hours marathon! I knew that he had wanted to make an impressive strong finish in the run leg, so I started to run again to maintain the gap between us.


Then a moment of panic during the third loop. Looking at my GPS watch, I had expected to see Teo on the other side of the road, but he was nowhere to be seen! A little further later, still no Teo! Did he manage to overtake me somehow, and I didn't see him in the crowd? Anxiety...


I ran and ran until it dawned upon me that Teo must have overtaken me. It was such an unsatisfactory way to finish the race. So much hard work, and I lost it all in the end! I slowed down to a walk...feeling disappointed. It was then that I saw Dennis Tan, my friend who took up the role as the photographer for the event. I asked him if he had seen Teo ahead of me, but he said he did not. I still couldn't believe that I've lost the race to him. Dennis said would I like to run? I said there wasn't much point in running. I had already achieved my PB, but no amount of running then would make me win back dinner!


Then the second big surprise of the day. Teo emerged from the opposite direction! Speaking of the devil! At that point, he was perhaps a little over 2km behind me, which must have meant he had been working really hard to catch up, but the good news was that he was still behind me! About 8km to go to the finish line, and if I wasn't careful, things can still go the wrong way! Dennis must have found it a little amusing; suddenly I sprang back into action; I started running and was gone in a jiffy!


I ran and walked for the next 6km, and with just 2km remaining to the finish line, I decided I should not even allow Teo any chance at all. I just gave all that I had left in my legs, and crossed the finish line in about 14:37. Teo arrived about 15-16 minutes later. 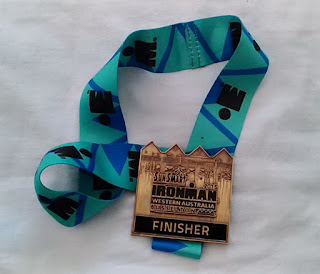 A case of a narrow escape from losing dinner to Teo. But now Teo thinks he has it all figured out for revenge in the 113 Sabah Triathlon in March 2016. Will have to come up with another plan soon!