I enjoy running the so-called long slow distance, otherwise simply referred to as the "LSD", with my friend, Dr Peter Ong, during the weekends. These are very mild workouts at conversational pace. We talk about a wide range of topics, and on a recent run, I was saying to Peter that we don't have very many inventors in Malaysia when compared to the western world. We are merely the consumers of products which have been invented by others.


I said it is not in our nature to invent things because creativity is not usually developed in our culture and upbringing. Children have the natural curiosity about things they see around them—such as why is it that birds can fly, whereas humans can't—but instead of explaining the reasons, parents have the tendency to tell them to just accept it as a fact of life. I'm not sure if that's because the parents don't know the answers to the questions; or they're just lazy to explain?


At other times, when the children try to be creative by building something, they may even be ridiculed. That would absolutely kill their inclination to make something new. So in the end, it's always much easier to just use what's already available and forget about trying to invent something new.


I can still remember when JJ was still very young, and we were watching Rise of the Planet of the Apes, she was amazed by the apes in the movie. And then asked me an interesting question; she said did the movie maker train all those apes to act in the movie? Instead of ridiculing her question or telling her to just keep quiet and continue watching the movie, I went into a long explanation of how computers were used to digitally change the appearance of humans into apes.


I'm by nature a curious animal, and I''m always wondering about things. If I see something that I don't understand, I would try to learn more about that something. Of course I don't get all the answers all the time, but I keep trying. I sure as hell would encourage my daughter to be like her daddy. I'm convinced that the mere habit of asking questions and searching for explanations, can develop the intellect; and if the child is born with a latent talent for inventions, that, too, can be developed.


But that is not the attitude of the majority in Malaysia. No, far from it; the first reaction is almost always that of ridicule. Many years ago, other famous inventors were ridiculed too. The Wright brothers, for example, were ridiculed when they first propounded the idea of a flying machine. But their people have since outgrown that attitude.


We in Malaysia are still stuck with the mentality of staying put in our comfort zone. Whenever one of us comes up with the idea of something different from the ordinary, the first reaction of the majority of Malaysians is to ridicule and poke fun at the inventor. We hardly ever encourage our people to be creative. Such is the case of the "point-to-point air transportation system", dubbed the "flying car" as reported here.


Well, this is not the first time I range myself on the side of the minority; I see the Malaysian "flying car" as a beginning. I'd imagine that if I were to have lived in the era of the Wright brothers, I would have viewed their first aeroplane models with the same enthusiasm too even if it had looked like total craps at the time. I mean, if not for that first aeroplane, how would we end up having jumbo jets in the skies today?


Some people are inventors, whereas some are just consumers. It might have something to do with natural talent, of course. Some people think out of the box, whereas some are just text book readers. In my mid fifties now, I don't have much more time, but I hope to see Malaysia inventing something important for humankind one of these days. I know the idea sounds ridiculous, especially since Malaysians have very negative attitude for inventors. But after all, I am a dreamer, and I don't mind being ridiculed too.

I have seen The Lord of the Rings some years ago, but I've never really been a big fan of the franchise. I know, of course, that it comes in several sequels, but to be honest, I can't remember why it had to be that long. The little that I can still remember was that it had something to do with fighting to acquire the ring, although I can't remember now what was so special about the ring.


I can also remember bits and pieces here and there. For example, I know Gandalf because he had a striking resemblance with a property valuer I once knew; and Gollum, also known as Smeagol, simply because, to me, he looked a lot like Datuk Yong Teck Lee.


There were many other characters in the story of which I know very little about, including the Hobbits. The Lord of the Rings branched out to focus mainly on the Hobbits, but I struggled to stay awake through its first sequel. Sadly, I fell asleep about 20 minutes into the movie, and never had the mental endurance to continue watching up to this day.


Nevertheless, a comment from a friend, Hana Sue Harun, some years ago made me look it up on the internet. You see, I showed Hana a photo of my scale to show my weight. But instead of focusing on the figure on the scale, she was looking at my feet, and then exclaimed that I had big feet like the Hobbits! As you can see, Hana's mind works in a weird way, but of course that is not surprising because she's an ex-St. Franciscan. I mean, most, if not all, St. Franciscans try very hard to be "different" somehow. It's almost expected of them! But that is a separate story to tell, and deserves a post of its own. So, anyway, that made me curious to know more about the Hobbits. 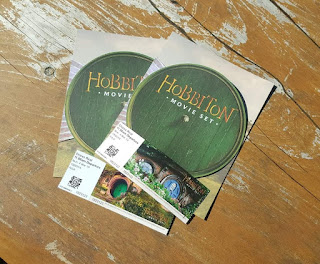 Fate would have it that my wife was keen to visit the Hobbiton Movie Set during our visit to New Zealand recently, and I had to force myself to tag along. Driving to the location in a rented car, I was equipped with the knowledge that the Hobbits had big feet, and hardly anything more than that. For the astronomical cost of about RM200 per pax, the guided tour was about 2-hour long. The tour included a short return bus ride to the actual site and a complimentary drink at a cafe known as the Green Dragon Inn.


Throughout the tour, the guide was throwing out questions to the group, and it was obvious that we had some big fans in the crowd as they knew practically everything about the Hobbits. The specific details on specific locations. The guide would say something like, "This was where Bilbo Baggins uttered the line 'I'm going on an adventure' as he was running down the path", and there was a chorus of acknowledgements and exclamations from the crowd. I pretended to know what she was talking about, of course, but later, she gave an interesting statistic. She said about 40% of the visitors to the set had neither seen the movie nor read the book. So I suppose I'm not too bad, I had at least seen 20 minutes' worth of the movie, and I knew that the Hobbits had big feet! 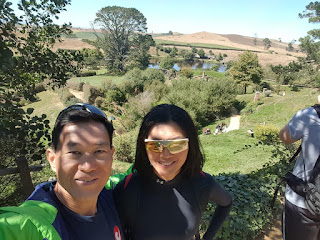 If you've never been to the Hobbition Movie Set, let me just say that you won't be seeing any Hobbit there. At the back of my mind, I thought it would have been a great idea to hire some tiny people—for example, Mohd Isa Abdul Samad comes to mind—to act as Hobbits, so that the village would feel more convincingly alive. As it were, it had an air of an abandoned village. 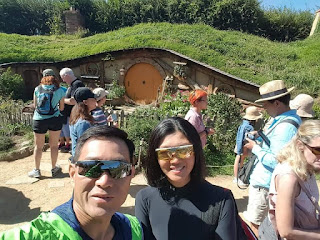 The dwellings in the village aren't really dwellings—they're merely doors and windows and tiny yards. There are no rooms or any kind of living space behind those doors. But there was one that had a bit of hollow space behind the door. This was intended for visitors to take photos. 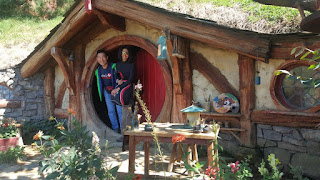 I had, at the time of the tour, very sore legs as I had just raced the Ironman in Taupo two days earlier. So walking up and down the slopes was something of a challenge, albeit a mild one. But you can imagine what a big relief it was for me when we finally adjourned to the Green Dragon Inn where we could quench our thirst and make toilet visits. I'm happy to report that these were modern toilets with modern plumbings; there's no need to instruct Jack and Jill to fetch a pail of water from the well on top of the hill. Of course while resting and waiting for the bus, I had the opportunity to catch up on Candy Crush Soda Saga. 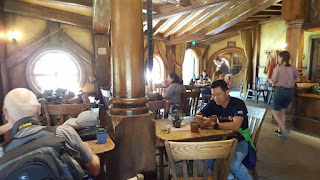 So that concluded the tour. It wasn't as boring as I had expected after all. But I doubt that I will be watching the Hobbit movies any time soon.