A few months ago, a friend told me about the NSiX Tupong Duathlon 2017 in Kuching. My racing calendar for the second half of this year is rather packed. 2 weeks after the Ironman Gurye, in September, I raced the Challenge Iskandar Puteri in Johor. It was a tough race for me as my body had not fully recovered from the full IM distance. There was another short duathlon organized by University Malaysia Sabah on the following weekend, but I decided against it, as I thought it would be too stressful for my body. Instead, I allowed for another week's rest and joined the Kuching duathlon event.


I was a little concerned about finding my way to the race venue from the hotel, and I posted a short paragraph on the organizer's facebook page, seeking help from other participants. Shortly later, a lady by the name of Wendy Ng (not to be mistaken with the goddess, Wendy Tan, who has the habit of turning up at almost all the races in Malaysia) offered to help me out.


I arrived in Kuching late morning last Saturday, and the driver from the hotel was late by about 45  minutes. Wendy drove me to the race pack collection and we duly collected our race packs. I met my friend Rizal Ahmad Banjar there. Later, Wendy brought me to lunch where we met her friend Trevor, and we spent the time talking about races. We got a little carried away with the carboloading however by having ABC for dessert.


The next morning, I rode from the hotel at about 5:15am, and reached the race venue at about 5:30am. It's a very small event with just a little over 100 participants. I met Jazel Chiew as she was setting up her bike. I have known her for quite a long time, of course, since I've seen her in many of Coach Vachel's cycling photos on facebook. But I'm rather sad that she didn't realise all this while that I ever existed in KK! And I thought I'm a famous chap!


It was just a short race; 5km run; 38km bike; 5km run. But truth be told, I'm not a big fan of short races because I have to race hard, and my heart rate would shoot through the roof! The flag off was delayed for about 15 minutes. But immediately after the start horn at 6:45am, I tried to break away from the crowd. For the first 200m or so, I was running at 4:30min/km pace, and then settled to about 5min/km thereafter.


As I had expected, I was gasping for air by 3km into the run, and I had to slow down a little. I was trying to keep up with the front pack in the hope of catching the leading peloton during the bike leg. But I just did not have it in my legs to keep up. Accordingly, when I finished the 5km run, the leading bike peloton had already left.


I started the bike leg with about 32kph, and then shortly later, Rizal overtook me with a few other riders. I decided to keep calm to bring my heart rate down a bit. We had to pass a residential area where there were many roadhumps. But by the time I was ready to get into my normal cruising speed, Rizal was already too far ahead. I maintained an average 34-35kph and there were some other cyclists drafting behind me.


During the run, I was aware of some strong cyclists behind me. You see, most cyclists don't like to run. They would ride practically every day, but not run. I decided to just maintain my bike speed and wait for the cyclists to come. At about 10km into the bike leg, a whole bunch of cyclists came from behind, riding at around 40kph. I let them pass, and then took the chance to draft at the back. I'm so used to training solo on the bike, and I very, very rarely get to draft. But now I had the opportunity to draft behind a big group of cyclists at 40kph, and it felt so easy!


I had expected to take turns to take the lead. But there was no need. As usually is the case with cyclists, everyone seemed eager to lead, so I remained steady at the back. I had a phobia about drafting however, as I was afraid that if anything happened in front, I would be involved also. Along the way, I saw some bike crashes from the corner of my eyes, but I remained focused on the cyclists ahead.


I'm so used to training long for the bike. So when I finished the bike leg in just over an hour, I felt like it was too short a workout. I got down from my bike and there was a bit of a congestion at the narrow path in the transition area. But eventually I was able to start on my final 5km run. Because of the high intensity, I was fast becoming tired about halfway through the run. On my second loop, I overtook Jazel. I was keeping an eye open for Rizal, but he was probably too far ahead of me by then. 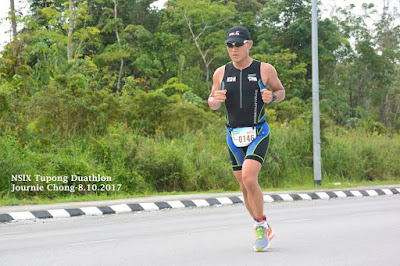 
I crossed the finish line in just under 2 hours and was second in my category. And then later I saw Rizal. He was unfortunate to have crashed a few kilometres before the end of the bike leg, but thankfully he was OK apart from a few minor bruises. 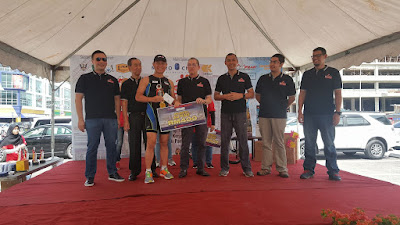 Wendy Ng emerged champion in the women's category, and Jazel got third. Coming down from the stage after receiving my trophy and mock cheque, I was intercepted by the Race Director. I thought there was some sort of mistake somehow with my position. But actually, he just wanted to tell me that there was a printing error with the mock cheque—it said RM400 on the cheque, but actually it was RM500 in the envelope. I'm not complaining!


Then a quick ride back to the hotel to repack my bike and prepare for my flight home. It was like a dream—out from KK on Saturday morning, race on Sunday and fly home the same day; and then back to work on Monday morning!


But now back to the dreadful Ironman training routine. about a month left for the Ironman in Langkawi... gulp!