Seeing Is Believing; Believing Is Seeing

I was discussing and debating a religious issue in another blog. Maybe I asked too many questions up to the point that it became too hard to reason things out with this stubborn man. But as usually is the case with religious people, it boils down to faith. And I raised the question if one should simply accept what's contained in the holy books solely on faith, without seeking justifications for the teachings?
This was the reply I got from a fellow commenter in that blog:
"You're right Cornelius that justifications arent necessary coz I feel that Man will only feel justified only when he hears what he wants to hear. I also feel that we see only the things we want to see. And there will always be people who may/are/will not or do not want to be able to see certain considerations. There's nothing much anyone can do really except pray that insyaallah, they will one day."
Actually, the above response is very true. In fact so true that it is equally applicable for the religious people too. When one believes in something, he will see only that something, and probably will be blind to all other things no matter how glaringly clear they are. But of course the person who gave that comment above probably does not realise that he, too, sees only what he wants to see.
I can still remember a trip up Mount Kinabalu many years ago with some religious friends. It was a beautiful day with only some patches of cloud in the sky that day. High on the mountain at Laban Rata, my friends gathered together and excitedly pointed to the sky. I was seated on a sofa, resting my legs, but couldn't control my curiosity to know what the commotion was all about. So I went out to join them.
Well, it turned out that they were excited because they saw "Mother Mary" in the sky.
I said, "Really?... Where?"
One of them pointed to a bunch of cloud in the sky that appeared—if seen from a certain angle—something like the shape of a woman. That then was "Mother Mary", the mother of Jesus Christ.
A couple of weeks ago, there was a news article about a man who thought he saw something which appeared like the image of Jesus on the window of his truck. He said he wasn't gonna wash his truck for a while. So that is a good excuse I could use one of these days. When I am lazy to get my car washed, I can say Jesus is on my window.
And today, I found yet another article about people seeing the image of Jesus, this time at the bottom of an electric iron. And because the image was there, it meant that the owner of that iron has reassured herself that "life is going to be good".
This is the photo of the famous electric iron. 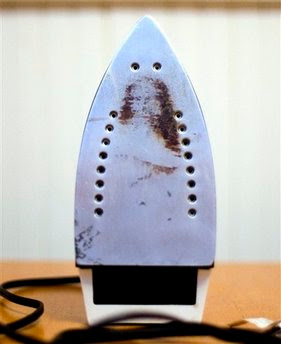 Can you see Jesus there? Honestly, I can only see some dark-coloured residue at the bottom of the iron, but maybe some of my religious readers can see Jesus there.
But seriously, can anyone tell me what Jesus really looked like?

"When one believes in something, he will see only that something, and probably will be blind to all other things no matter how glaringly clear they are"

I have found that to be so true. I can give a recent example of that happening a few days ago. Somehow the topic came up about drinking, what the Qur'an says about it - and my mother-in-law said the Qur'an says it's haraam. Either I or my husband said it didn't say that exactly, the word haraam is not there. We pulled up the 3 verses about drinking and my husband was trying to get her to read them and show where the word 'haraam' was. (It's not there). She's like "I know, I read it, it's there", (and she can read out the Arabic words so she could tell if the word haraam was there or not).
We even were with one of her relatives that actually knows Arabic and he said that it is not there.
Then she started talking about the hadiths, how they explain the Qur'an. But she is so stubborn/blindly believing what she believes she said that my hubby was blind. ???? It's like arguing with someone who doesn't understand what you're saying, how she couldn't answer the question (plus she got upset with us). :p

Welcome to my blog, Aynur!

Yes, unfortunately there are many people like that in this world. And I dare say there must have been times in my life when I've been guilty of the same thing!

It's funny that you brought up the subject of drinking in Islam. I think the trouble about the holy books, whether Quran or Bible, is that sometimes the message may be vague or silent. Therefore we are bound to come to some ambiguity; or if not, at least we need to do a bit of interpretations. And of course we may have many different interpretations.

For example, in Malaysia, apparently drinking liquor is haram in Islam, and punishable by whipping! Yes, whipping!

In a recent case, a Muslim woman who was caught drinking beer in a hotel lobby was sentenced to be whipped. And that was followed by a public outcry, not only by the non-Muslims, but also by the Muslims themselves. It seems that many Muslims agree that drinking is at least disallowed, if not haram, but they can't really agree on the severity of the punishment. One such person is our former Prime Minister, Tun Dr Mahathir.

So now we have more or less come to a stalemate. The authority has reaffirmed several times that the punishment stays, but no one knows when exactly it will be carried out. I have a feeling that the authority is trying to find the best formula for a face-saving means to withdraw the punishment.