On 24 October 2009, the Rotary Club of Kota Kinabalu (RCKK) made history by organising the first ever Joint Interactor Installation Night for the 2009/2010 office bearers. Prior to this, the five Interact Clubs under the sponsorship of RCKK had been organising their respective installation nights separately.
The idea of a joint installation night was first suggested by President Frankie Fu during IPP Warrence Chan's term last year. I see it as quite an achievement since it's not so easy to bring all five schools together to organise such an event.
The event was well-received and the banquet hall at the Shangrilla Tanjung Aru Resort Hotel was fully occupied. The Guest of Honour was President Frankie Fu himself who attended the event with his charming spouse, Mary. 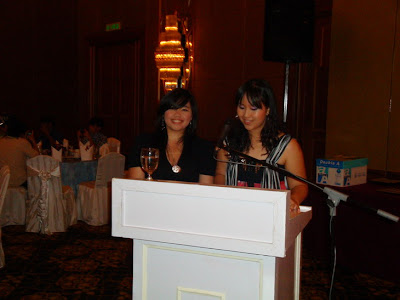 It so happened that one of the two MCs for the night was Liyana (left) of Team Jolly Roger which hunted in my KK Challenge 5 recently. 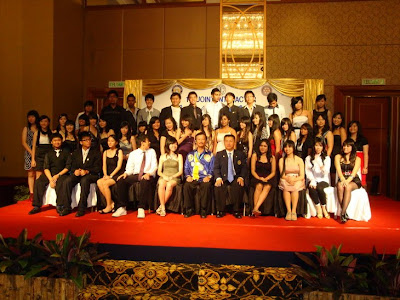 The new office bearers from the 5 Interact Clubs. I'm afraid I'm unable to identify all of them except for IPDG Edward Sung Burongoh (front seat, in Rotary batik) and President Frankie Fu (beside IPDG in suit and Rotary tie). 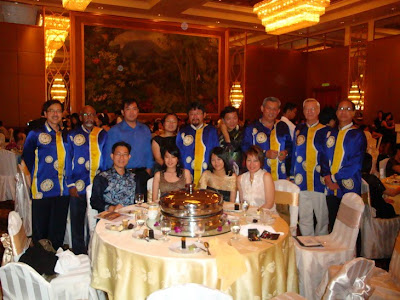 Some of us Rotarians also took the opportunity to pose for the camera. I was lucky enough to sit beside a charming young lady (unfortunately, I don't know what's her name!).
Some of my fellow Rotarians were asking me about my different outfit that night. So once and for all, let me explain it here. I did pay RM190 for the Rotary batik, but I never did get that batik! I must make it a point to pester Rtn Paul Thien and Rtn Iskandar Mohd Shah.