Bina Puri had its Family Day today at the Beringgis Beach Resort. Mia, who's the Legal Manager in the company, is also the President of the Sports Club for 2009. An estimated crowd of 300 people comprising company staff and family members were present.
We arrived at the resort a few minutes after 8am. Then we had buffet breakfast. Some families were half an hour late, which was true to the Malaysian habit. The games started at about 8:45am. I'm not a big fan of telematches, so I sort of found a nice spot to do my crosswords.
By the way, yes, there was that forsaken coconut bowling too. I really must find out who invented this particular silly game. 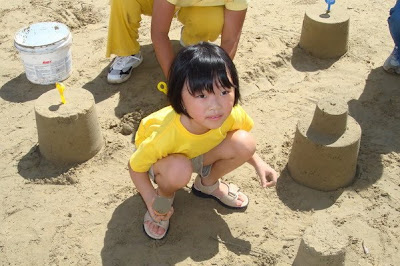 JJ enjoyed building the sand castle together with the other kids. And mommy was also there to help. But dad was only there to take this photo. If only I can squat like that for 5 minutes!... but oh well, those were the days. In the end, an hour's hard work earned the Yellow Team second place for the sand castle competition. 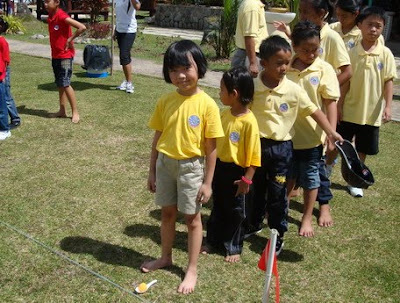 And here's the rascal getting ready for the ping-pong-ball-and-spoon race. She was supposed to have practised for this game since 2 weeks ago, but never gotten around to it because of her exams. 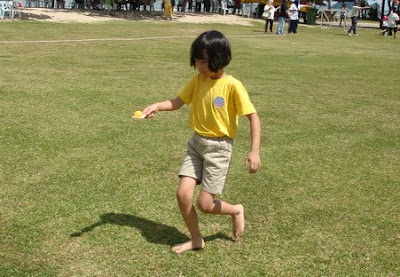 And here she is again in action. Mom, if you're reading this, I think our kid needs to eat a bit more, hmm? And for God's sake, let her hair grow longer, at least up to her shoulders? 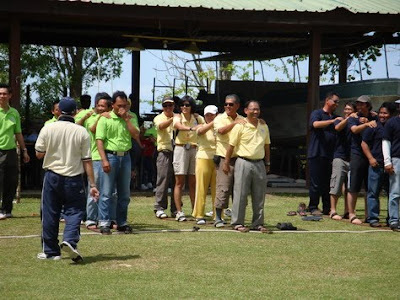 Of course Mia also had the opportunity to play one of the games—the giant slippers race. That's her, second from the back of the Yellow Team. 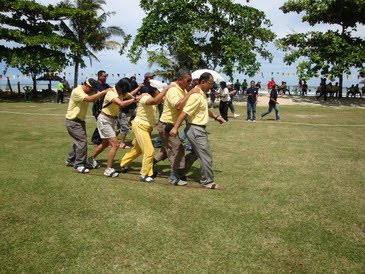 And that's them in action about halfway through the race distance. Actually, they did quite well and ended up third. Unfortunately, there was some sort of technical problem and they had to do the race again a second time. And when they did it again the second time, they did not even reach the finish line, because they fell down and never had time to catch up.
After the games, we went to the hall for lunch. A clown was there to entertain the kids with some magic tricks and giving out baloons. At the end of lunch, they had lucky draws, the grand prize of which was a refrigerator. The event ended shortly after 1pm.
JJ had a swell time. Upon getting into the car on our way home, she asked mommy when's the next Family Day, and she's disappointed to have been told that it's gonna be a year from now!