I've been spending quite a lot of time going blog-hopping over the last couple of days, and been discussing and debating on several interesting issues. One such discussion was on the subject of female circumcision—whether it is Islamic. I find it very rewarding to follow such discussions and debates because my curious mind can just feed on the mass of information found in these forums.
For example, I now know that it is possible to reconstruct a severed clitoris. Before this, I had no idea that this was possible at all. And it fits all too well with human nature too—it is so like us to destroy the things we have naturally; and then we'd go through so much trouble to get back those things we've destroyed.
Such discussions are not always possible in Malaysia because of several reasons. Firstly, female circumcision is considered a sensitive subject. The vast majority of Muslims in Malaysia still do it because it is considered a religious requirement. Most Muslim women went through it because there were told it is necessary by the scholars.
Secondly, in Malaysia many people won't dare to raise questions about religions, because the person raising those questions may find himself in hot soup for causing "confusion". Otherwise, the mere act of asking questions may be construed as blasphemy. Even the great Tun Dr Mahathir himself was criticised when he raised some interesting questions about Islam in his blog.
Finally, I don't believe that Malaysians are able to discuss these things honestly. Many of them are influenced by others, and their answers or opinions are always based on information they got from someone else. That said, however, some of them are honest in their answers, so at least that's a comfort.
Anyway, I found it interesting that someone suggested that female circumcision is done to ensure that the girl does not engage in pre-marital sex. I argued that the hymen is already doing the job of indicating virginity. I'm not going to repeat what transpired in that forum, but those of you who're keen to know, please follow the link above.
Speaking of the hymen, it's quite a coincidence that just a few days ago, it's been reported in The Star (quoting China Press) that Vietnamese women are opting for artificial hymen insertion in Johor before marrying Malaysian men. So heads up, guys, be careful with your virgin new brides from Vietnam. These days we have lots of fake merchandises in the market.
I want to share with my readers a strange coincidence while I was trying to post a comment about "hymen" in the other blog. All comments there are moderated and commenters would have to key in "WORD VERIFICATION" when commenting. Those words are mostly meaningless random letters in no particular order. But what I got for that particular comment was this: 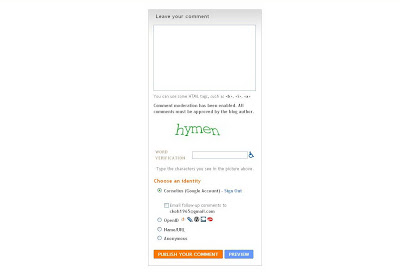 Well, I just learned something new from your blog..

I was told that circumcison does not happen in Malaysia.. That a woman's clitoris is simply "pricked" with a small pin when she is first born, sort of as a symbol of circumcision, but not actually happening.

Where did you get your statistics from concerning female circumcision in Malaysia?
As far as what I have learned, this is not a practice among Muslims in Malaysia and only happens in Northeastern Africa..

I would love get some of the information you have regarding this matter.

Ah! Unfortunately, I have to admit that I don't have any statistics. And I don't know the kind of circumcision that's performed on girls in Malaysia. But it is being done on many of them.

I know so because half of my siblings have converted to Islam and they do that to their daughters because their husbands' families have kept that practice for generations.

My sister, Audrey, will be coming over during the school holidays with her kids. I will try to ask her to enlighten me on the kind of circumcision she and her daughters went through.

As for asking other women (outside my family circle) I'm afraid that's a bit difficult because as I've mentioned this is something quite sensitive here in Malaysia. But I will try anyway.

I invite my Malaysian female readers to share with us here about female circumcision in Malaysia, anonymously if you like.

That will be an awkward conversation starter, eh?

lol :) Do update if you end up getting into that discussion..

Yes, Sarah, that would be a very strange opening (I mean the conversation, not the part that was circumcised.)

But the good thing is that we are quite direct (I think most people can probably tell from my posts), so we can talk about these things without having to be too "careful".