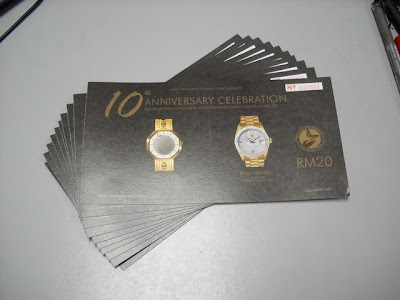 There was a commotion in the office shortly after lunch today. Vinnis was going around the office to sell tickets for a Rolex lucky draw. The tickets were priced at RM20 each, and the prizes are Rolex watches. Apparently each watch is worth RM500,000. So these two in the picture would have a combined worth of RM1 million! Vinnis spent a brief moment to tell me that these watches are made of pure gold and diamond studs!
This lucky draw is in conjunction with the Palliative Care Association Kota Kinabalu (PCAKK)'s fund-raising dinner in May. The PCAKK is constantly trying to raise funds to run its activities, so if you are in the mood to give a bit of charity, please help out by buying some lucky draw tickets. I bought a booklet containing 10 tickets, so watch out, folks, in less than a month from now, I will be a Rolex millionaire!
Speaking of charity, I received a text message from Teo this evening, telling me that he won 3rd prize for the Sky's The Limit BIM fund raiser category. You see, the Borneo International Marathon is also allowing some people to join the race while at the same time help to raise funds for charity. And Teo, having done his part, won a 3D2N trip to Danum Valley. But I bet he's gonna be jealous when I become a Rolex millionaire next month!
Later in the afternoon, I received a call from Ellen Yee. She was the coordinator for last year's PCAKK Treasure Hunt. She told me that this year it's the Kiwanis Club of Kota Kinabalu's turn to organise a treasure hunt for fund raising. My heart raced for a bit because of the excitement, until she told me that I will be the one to clerk the hunt! Last year, Team Main Tembak did their part in clerking the PCAKK Hunt. So I guess now it's my turn to do a bit of charity work!
Come to think of it, it's been some years since the last time we've had a Kiwanis Hunt in KK. If I'm not wrong, we used to have one every year. But somehow it has been discontinued since a few years ago. If indeed it could be revived again this year, that would be good for the local hunters. I'm sure many would welcome it. I just hope that the new hunters won't be scared to join when they know that I'm the CoC! (Smile)
Maybe I should organise a pre-Kiwanis Hunt to prove to the new hunters that I can do an easy hunt too. We call it the "pancing-pancing" hunt. Alvin and company did the "pancing-pancing" hunt successfully last year in their Tembak Series 1. But he unleashed quite a major punishment when he subsequently clerked the PCAKK Hunt!
If the word "Challenge" is not in the name of the hunt, I need not make the hunt very challenging, you know! Based on a scale of 1 to 5, with 1 being the easiest, and 5 being the hardest, perhaps a 3 would be just nice? So, hunters, if the Kiwanis Hunt materialises, what scale of difficulty would you hope for?

love Kiwanis Hunt! my virgin hunt in Sabah to be frank... well... those days!

Looks like we're gonna have more or less similar as last year for our local treasure hunting scene! But not sure if there will be medals in the Kiwanis... hehe

You people will have to appeal to the Kiwanis committee members for the medals. I have no control over that, except for the torture in the hunt questions... hahaha... nah just kidding.

Then I've been meaning to post something about the Aminulrasyid kid who went for the ride of his life!

Iron Man 2 will have to wait till next week; according to Mia until after JJ's exams!

In the mean time, I might be going fishing this weekend. So looks like I won't be joining you people on the long run after all. Might as well, I need a short break from running anyway.

So much to do within so little time!

Like CK, I also love those Kimanis hunts especially those that were overnight hunts ending in places like Sabandar resort, Zen Garden,Kundasang, Mimpian Impi,Tuaran and Kudat resort Hotel.

One of their earlier hunt was also my virgin hunt and first experience in treasure hunting.

That first year was a disaster as my team finished way down the list since at first we don't know what to expect in term of cryptic questions and mind boggling riddles.
The following year we came back like a bomb and ended amongst the top 10 and following that year,top 5 finishing!Those were the days when we always look forward to their hunts. Even though we did not finish amongst the top 5,the lucky draw prizes and early bird prizes were still a welcome sight to us then.Can you imagine some of us did really drove to the starting and flag-off venue and waited there as early as 6 am just to earn that early bird prize!

I know they don't give out medals but trophies at every hunt. No harm to ask Cornelius to suggest to their committee to come out with medals for their next hunt, maybe something similar to those given out in the BIM!
Over to you Cornelius to bring this up.

Kiwanis Hunts have made impacts to many of the season hunters you see in the field today. It was an annual affair until DBKK sort of took the shine with their highly inflated prizes.

They did hand out some small trophies to the top three teams and they have a large salad bowl as Challenge Trophy. Someone remarked that the team that wins it consecutively for three times gets to keep it. Not sure whether it is still available.

CK, it should be "one hunt announced by one dumb announcer". Unless of course the dumb announcer doubled as the CoC and decides to leave the word Challenge out from the hunt and does not want to mislead others to think that it is for Novice only, and finally settles for Dumb Hunt.

Not too sure about medals for all the finishers like in the BIM, if that's what you mean. But if it's a matter of the top 3 finishers, I can't see why the Kiwanis committee members can't accommodate such request, if indeed it is a popular request. However, some people have also said that they prefer trophies instead of medals. I don't mind throwing these ideas to the committees for consideration.

Yes, I do remember about the Challenge Trophy. But I think it's a bit too much to expect 3 consecutive wins to be eligible for that trophy.

I will try my best to do another hunt, whether in the Kiwanis Hunt, or another unofficial one later this year. But just for the record, I'm not really doing this because I'm enjoying it. Rather, I am convinced that I can keep the fire going for the existing pool of hunters. But in the mean time, I am also hoping that someone else will also organise hunts in KK because I enjoy hunting too!

Our very first hunt in KK was the 5th Kinabalu Kiwanis Hunt way back in 1998 where they gave out those little metal trophies to the winners. Nice touch, I must say. It's good that they reviving this series, I wish you all success. If it's an overnight hunt say in Kundasang or Kudat, I may want to join. I always want to visit the famed Kota Belud's Sunday market.