Yesterday was the Sutera Harbour 7K Sunset Run 2009. It is an annual charity event organised by the Sutera Harbour Resort. It's reported that 10,000 people took part, but perhaps lesser people actually joined the run.
Mia and I joined this run again for the second time. Unlike last year, we arrived at the starting line with some minutes to spare. Before the flag off, we had a bit of aerobics session for warming up. Last year, I completed the 7km in about 39 minutes, whereas Mia did it in 47 minutes. We were both hoping to improve on our respective times.
Those of you who're not familiar with this event, don't get the wrong impression by that word "sunset" in title of the event. Each year, the run starts at 5:17pm, and at that time it's still burning hot here in KK.
Because we arrived early this year, Mia and I were able to find our way to amongst the leader pack. That in itself is several seconds' advantage for short runs like this. Last year, we were late and started way behind and got caught in the group of all those slow runners. Yesterday, upon the flag off, there were not many people blocking my way, and I was able to run my confortable pace after about 2-3 minutes.
About 7 minutes into the run, I arrived at the first loop within the Sutera development estate road. At that point, I was able to see some familiar faces from the Likas jogging track. The sun was beating onto my face, but I had a cap on. There were only 2 drink stations for this event, and I stopped at both of them for drinks. While running in that heat, I felt that I was not going to improve on last year's time. I felt so tired even before reaching the halfway point. By then I had to slow down a bit. On the highway leading to the Wawasan, I looked back a few times in the hope of finding Mia in the crowd. But she was nowhere to be seen.
Just before I reached the corner to the Wawasan roundabout, I saw Kevin, already on his return trip. By the way, he had just returned from a successful marathon in KL at 4 hr15 mins a couple of weeks ago. Before reaching the Wawasan loop, I stopped again for another drink. The heat was just too unbearable for me; I felt like my lungs were gonna burst.
While I was on my way back, and turning on the long stretch of the highway again, I saw Mia arriving from the other direction. I saw Andrew Voon too. I was preserving a bit of energy for the last push towards the finish line when I suddenly saw Teo running. I increased my pace and ran together with him for about a hundred metres or so. Then at about 1.5 km to the finish line, I began to increase my pace even further.
I reached the finish line in 36mins 56 secs. Not very good, but at least it's still an improvement over last year's performance. I grabbed some drinks and walked around for a bit before Mia arrived with a time of 44 mins. It was quite a satisfying run. In spite of the 7km, I find that it's not so easy to run under 35 mins. I really need to try harder next year.
Today I was unable to do my 15km run. I usually do my long runs first thing Sunday mornings, but because of the Sutera run, I postponed it to this evening to allow a bit more recovery time for my legs. Unfortunately, it was raining very heavily from about 5pm this evening. For a while, I contemplated running that 15 km in Core Fitness. But you should have seen the massive traffic jam in City Mall then!
Next week will be an increase in efforts as far as my training is concerned. Beginning from Tuesday, Wednesday and Thursday, I'll be running 7km, 12km and 7km respectively, before that dreadful 23km on Sunday.
I was chit-chatting with some friends at the track recently and we were discussing about food supplements. Most of us are taking food supplements to coincide with our training programmes. So I thought I'd share with my readers the kinds I'm taking right now. Check it out: 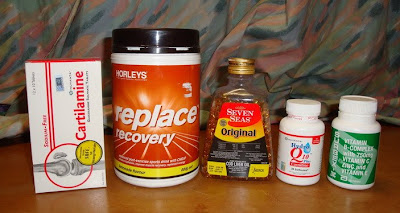 On the extreme left is the Glucosamine capsules which are only meant for "maintenance". I used to suffer pains in my knees and back, and I had to take Glucosamine for 4 months. Mia is presently suffering backache, and she's just embarked on Glucosamine too. That's how it is when you're getting old (smile).
I just bought the Horley's Replace Recovery. I realised that each time after my long runs on Sundays, I would take too long for recovery. I would still feel a bit of exhaustion in my legs by the time I do the Tuesday runs. A pharmacist recommended the "replace recovery" supplement. I don't know if it's really gonna work, but I thought there's no harm trying.
The cod liver oil capsules I've been taking for ages now. When I was a small boy, I took the white liquid form which I hated so much. It really tasted like something rotten. But these days someone finally came up with the idea of producing the orange flavoured type which my JJ is taking on a daily basis.
Soon after I started training for my first half marathon last year, I've been taking the Coenzyme Q10. Apparently it is good for my heart, although I didn't really research deeply into it. I'm just relying on the information given by the pharmacist.
Finally, the SURBEX-ZINC B-complex tablets which I've been taking since last year.
I suppose I don't really need some of them, and it's a bit inconvenient to be taking so many food supplements on a daily basis. However, whenever I travel, I would forgo taking them for a few days. In the mean time, so many friends are trying very hard to ask me to buy other food supplement products. We have many, many of those in the market. They're of course very expensive. One particular product that I keep coming across is spirulina—almost all the direct selling brands are selling it, and of course all of them claim that their spirulina is of the best quality. Not to forget a whole range of herbal food supplements which are all "pure", yet they come in capsule or tablet forms. But for the moment, I'd limit my supplements to those above. I just hope that they can actually help to keep my body healthy.

I am contemplating supplements also. My doctor just recommended I take some different vitamins etc..

Although I am not a doctor, I think your doctor's recommendation is a logical one. The average human body is not designed to run such a long distance non-stop. I'm inclined to think that long distance runners are subject to higher rates of "wear and tear", and use up more calories and perhaps require a bit more of supplements/vitamins. I think a bit more is OK, but deficiency is certainly a no-no.