I borrowed Mia's camera to upload JJ's picture she took (see previous post) on Tuesday morning. You see, Mia has her own camera which she uses mainly for JJ's school work, and her own stuff, including pictures of our garden at home. My camera is mainly for the purpose of Rotary activities when the need arises, and also pictures of signboards for treasure hunts; and also sometimes for my travels.
Anyway, as I was uploading JJ's pictures shortly ago, I noticed these pictures of our garden in her camera. So I decided I might as well share them here. Mia is the one who's keen on keeping such a garden. If I had it my way, I'd prefer our garden to be plain. It's quite time consuming to maintain. And if we're too busy to attend to it, then we'd have to pay other people to do it for us. And of course when it comes to paying, that is always my responsibility. I'd call this Mia's because she spends more time on it. 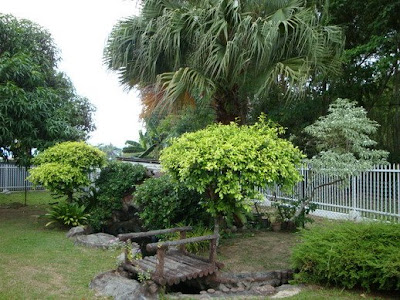 As you can see, these plants need a bit of trimming, but I'll probably arrange for one of those Timorese guys on bicycle to come during the weekends. 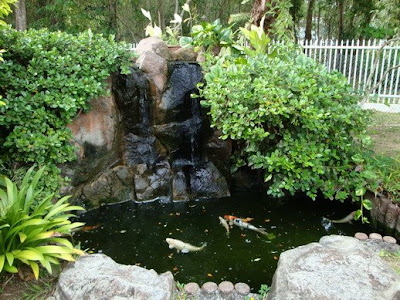 The waterfall (which is artificial) with some kois in the water. We used to have many more kois, but some of them died when the pump broke down. Mia is keen to buy new ones, but I didn't think it's such a good idea. Right now we have about 15 kois in the pond. Having more will only lead to the problem of over population. 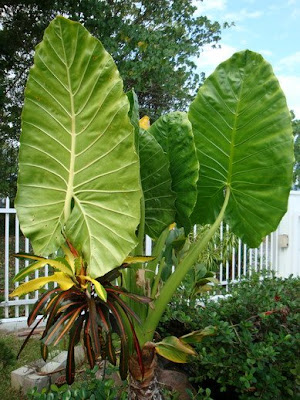 Mia's idea of giving a bit more shades to the pond. Too much sunlight penetrating into the water will cause unruly growth of green algae. 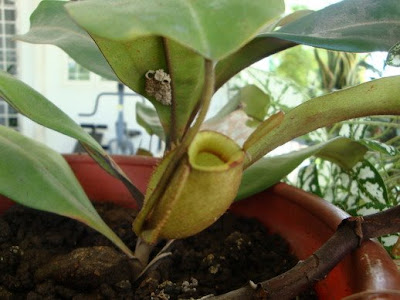 Mia is very proud of her monkey cups. I don't know what's so special about it, but y'know, I suppose it's quite unique since it's not seen everywhere. 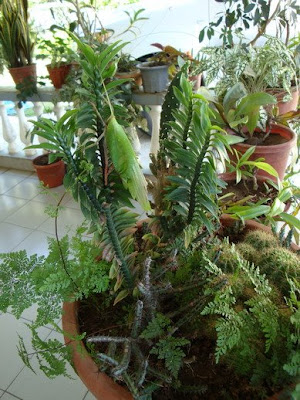 And this is one of her many potted plants at the car porch. She took this picture not so much because of the plants—there is nothing special about it. Rather, there is a grasshopper-like insect resting there. Can you spot it?

OMG that is a huge bug!! I love your garden, it reminds me of my mom :)

She is a bigtime gardener and her back yard is like a sanctuary. She has two ponds..

I love those huge elephant ear looking Plants with the gigantic leaves! What is that plant?

It takes a lot of work to maintain the pond in a climate like what we have here in Malaysia. The pump has to run all the time and a minimum of 30% of the surface of the pond must be shaded. Otherwise you will have algae problem. The algae multiplies at the rate of up to 30 time per hour in the hot sun.

To be quite honest, I really don't know what are those huge leaves. They grow wildly all over the place here. But because of the size of the leaves, we planted it in our garden to shade the pond.