A couple of months ago, I posted Dirty Harry & His Doctors. It is a known fact that our police interrogators have a strange method of conducting their business. Maybe they're just tired people who're not so keen on wasting their time on futile interrogations when all they're gonna get are denials or information which are contrary to their theories. Therefore the only way to go is to force the information they want out of those in their custody. I suppose that can help to save a lot of time. But sometimes, perhaps they tend to get carried away in their "interrogations" and things can become a bit messy.
However, it seems that such conduct is not only limited to the police force. The Malaysian Anti-Corruption Commission (MACC) folks are also adopting the same approach in their interrogations. And unfortunately, not only suspects are subject to such treatments—even those who're called in to assist in their investigations are also given the same treatment. [The Star]
Having been involved in a corruption investigation some years ago, I'd like to share a bit of my experience to my readers. But my own experience concerned the Anti-Corruption Agency in Brunei, not here in Malaysia.
There was once when we prepared a report for a bank in Brunei. The officer in charge of that case instructed us to prepare the report as one of the requirements for a loan application. However, after the report was completed and duly sent to that officer, she called me up, saying that the loan application was rejected somehow. Therefore, she said that we had to cancel our invoice. Generally speaking, when preparing our reports, we do not guarantee that our reports will certainly support the loan applications; and our reports, once delivered together with our invoice, shall be settled regardless of whether the deal goes through or not. However, because of our relationship with the bank, and the goodwill with the officer, I was willing to withdraw our report.
It turned out that our reports were never returned to us. And it was not until some years later when I found out that the loan application did go through. The client had written out a cheque to the officer in her name, and she was supposed to settle the "processing expenses" for the loan. But instead of paying the consultants, she pocketed the money for herself!
When I found out about this, I wrote a formal letter to the bank and raised the issue to the top guy in the administration. The bank embarked on its own investigations and they eventually found out the truth. The officer was accordingly fired and a report was then lodged to the Anti-Corruption Agency against the officer.
I was called up shortly after that to attend an interview to assist the folks at the Agency. I arrived there one afternoon and was made to relate what had happened. An officer then recorded in writing what I said and, after about an hour, gave me the opportunity to reread my own story before requesting me to sign the document.
The former bank officer was taken to court, and she hired one of the famous lawyers in Brunei at the time. But because the evidence against her was overwhelming, she eventually decided to plead guilty.
The treatment I received from the officers at the Agency was very good, and I must say that it's so far beyond my expectation. But of course I was not giving information that would make or break a politician. Maybe if it were so, I might have been treated differently—I don't know.
In contrast, the MACC had subjected the late Teoh to interrogation from 7pm up to the wee hours of the morning. In my opinion it is a very harsh treatment given to someone who's not even a suspect, but only there to "assist" in the investigation. For such a long duration, there must be many, many questions they had asked the poor fellow. On the surface of it, it does seem strange that anyone would kill himself immediately before his wedding day. [The Star]

Never mind if he was physically tortured or not; whether it's suicide or murder. I think the MACC should seriously consider conducting their interrogations during office hours to start with. Now Malaysia wants to know what actually happened to Teoh.
I doubt that we're ever gonna get the real story, but I can't wait to see how the MACC is gonna explain itself. It should be interesting.

The wave is getting bigger now—in fact it may even turn into a great tsunami. So many blogs across the nation have made entries about this same story. And inevitably there're so many theories and opinions:

As usual, RPK is quick to capitalise on news such as this. I'm OK with that. I do read his articles every now and then, and I've found them to be quite entertaining. But although I find the circumstances surrounding the death of Teoh Beng Hock very strange, I think RPK is just too reckless in these paragraphs:

The unfortunate young man panicked. He went ballistic when he saw the distance he would have to travel before hitting the ground floor. He struggled. They could not hold onto him. Gravity took over and the life of this young man was prematurely snuffed out."

These are NOT facts. Keeping an open mind, I'd like to see material evidence before I can accept this kind of theory. I think RPK should make it clear that these are only his hypothesis. And if it really happened as described in these paragraphs, then he should furnish his readers with solid evidence. I think he should refrain from creating unnecessary confusions.

Earlier I said it's strange that a man would take his own life on the eve of his wedding. It is even harder to believe, now that it's revealed that his wife to be is expecting the arrival of his child in 7 months' time. What a misfortune that has overtaken Soh Cher Wei the bride to be. It pains me terribly to read about her; and I am truly touched by her decision to keep the baby after all. My respect and admiration for her courage. My condolences to her and hope she will find strength to weather this difficult time. 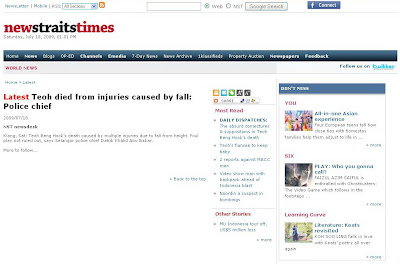 And this is a screen shot of the online New Straits Times just shortly ago (click on the picture to get a clearer view). As you can see, a few days after the death of Teoh Beng Hock, the Selangor Police Chief Datuk Khalid Abu Bakar finally announces the cause of death. He does not rule out foul play. I wonder how many people didn't already know that since a few days ago...

But I am confident that the Selangor Police Chief will make more announcements soon—I mean about things that we don't already know. Keeping my fingers crossed...

Am not feeling very well this evening. I think I'm coming down with a fever. Will retire early tonight.

But before that, I just want to say that I'm glad that the police is actively investigating Teoh's case. Am a bit surprised that they've questioned 40 more people by now. Hopefully, the interrogations were done within office hours. Am confident that they will soon lay their hands on the culprit(s). H'm... keeping my fingers crossed.