As a new comer to the cryptic clueing world, I dread clues which end with a question mark (?). Thankfully, not all cryptic clues have the “?” at the end. Generally speaking, when dealing with cryptic clues, solvers are told not to pay any attention to the punctuation marks found in the clues. The only exceptions are the “?” and “!”.

I shall not discuss about the exclamation mark, i.e. “!” here. As far as the “?” is concerned, most of the time it is used in cryptic clues to signal a pun—some sort of wordplay. And quite often the answer is not exclusive. I dread this kind of clues because a lot of the time one just can’t find the meanings in an ordinary dictionary. Words like “LETTER” may be referring to “LANDLORD”, because a LET-TER, cryptically, is one who lets his premises. So sometimes the clues may appear like this:

Q) Supporter of the proposer?

Because when one proposes to a woman, he is usually assumed to do so on one of his knees. But I certainly didn’t propose to my wife on my knee!

Q) Craft for the chef?

Because a STEAMER can also refer to a ship, apart from the cooking utensil.

Because in the cinemas, the person who directs the movie-goers to their seats is known as the USHER.

And there are many, many more of this kind of wordplays frequently used in cryptic clues. So you can understand why I dread them?

In the second question of my virtual hunt, I have adopted the “?” at the end. It signals to the solver that there is some kind of wordplay involved in the clue. In this case, that “?” is meant for “one who adds”. But to be fair to the new hunters, I have also included “Look after”. That should narrow down the scope of search substantially.

It makes sense to start from something you know first before tackling to difficult part. “Look after”, when taken together, can mean “care”, as in caring for the elderly. But here the intention is to take those words separately. “Look” means VIEW, as when you are viewing something. Then “after” means that VIEW comes after another word.

Even if the solver does not know what is “one who adds”, he should start scanning the sector to look for anything that ends with VIEW (or any other synonyms of LOOK). And he is bound to spot: 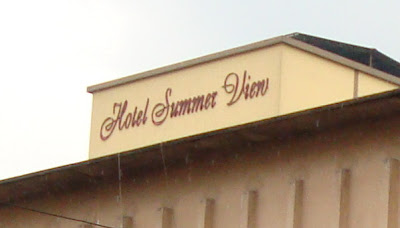 This question is well-answered. About 2/3 of the total participants managed to solve it. Well done, folks!
Posted by Cornelius at 10:18:00 PM

What about Carelink Pharmacy?
Link is something that adds also.
And Look After = "care".

You really think so?

Put LINK and SUMMER together. Which one do you think is a better candidate?

I was thinking the same for this question whether to choose carelink pharmacy or hotel summer view..lol....

in the end i opted for hotel summer view taking example like "someone who sweeps = sweeper"...lol...there for something that adds = summer? since there is a "?" there...got that by lucky i guess