Humans are habitual animals. When they have been doing something the same way over and over again for a long period of time, they will get into what we call a routine. When they are faced with a specific problem, how they deal with that problem depends on whether or not they’ve dealt with it before. If it is the same problem, and they have dealt with it successfully many times before, there is a tendency to deal with it exactly the same way again now.

When treasure hunters are given similar types of clues as those which they’ve seen before, there is a tendency to immediately adopt the same way of solving those clues. They’d go into some kind of mechanical thinking. That’s why whenever I set hunts, I usually include some sort of new twists into the questions; and very often the result can be quite devastating on the hunters.

Q6) Defend or toughen yourself first.

The first thing the average solver would do with the above question is to take the first letter of “yourself” because that word is located immediately next to the initial indicator—first. But in this case that won’t get the solver very far. So the next step would be to take the first letter of every word in that sentence. By doing that, the solver can derive the word DOTY.

A check in most famous dictionaries will not give a valid word for DOTY, but if one were to be hard-working, he is bound to find that DOTY has a meaning—it is a local Southern US word. Essentially, DOTY means decayed (wood). But it is also taken as “half rotten”.

Therefore, cryptically speaking, we can take DOTY = TEN, if we choose the last half of the word ROTTEN. Then we can change that TEN into its Roman numeral form, i.e. X. Thus we can derive the answer:

However, I do not agree with this solution. Essentially, what’s being done here is to start from the original cryptic clue to derive DOTY. Then what do we do with DOTY? Well, we take that as yet another cryptic clue. From this second cryptic clue, we are supposed to derive HALF ROTTEN. And this is not even a word to be found in just any dictionary. After that we move even further—we literally take half of the word ROTTEN. In this case, we’re taking TEN and totally ignore the ROT. Yet that’s not the end—we still go one final step further to change TEN to X.

In fact this is a classic case of trying to fit a square shape into a round hole. But I don’t think it is correct to use the product of the original cryptic clue to derive another new cryptic clue.

In my opinion, to maneuvre from Question => DOTY => HALF ROTTEN => TEN => X is just too much. This kind of maneuvre requires a magnificent leap which cannot be bridged on our return trip. It is impossible to relate X => DOTY.

No—my question does not require such a marathon of multi-level steps through 2 cryptic clues (one of which is a product of the original one) and several more steps after that. It is much simpler than that; and what’s more important, it does not violate the existing cryptic rules we have.

Because if WEEKEND = K, I can’t see why DEFEND can’t be F. Who cares whether there is a meaning to DEF; we are only interested in what’s the end letter in DEF.

Where first is the initial indicator.
So the solver will arrive at a simplified version of the question:

DEFEND or TOUGHEN YOURSELF first.

And now we come to the notorious Double Jeopardy (DJ). For the benefit of the new hunters, the DJ is a situation where the solver is supplied with the answer; and he is then required to find the question on the signboard.

Right now, we are given FORTY, though indirectly. If that is the answer, what should the question be? Scan the signboards within that sector, and it’s just a matter of time for you to find the question. 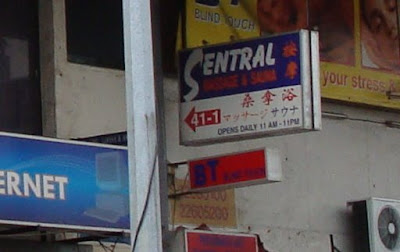