In Malaysia, treasure hunt questions are anything but consistent. There is hardly any special rule or established guide on how to set treasure hunt questions. Clerks-of-Course (CoCs) are therefore almost free to set their questions as they please. Some are not very cryptic; some are not particularly concerned about grammatical accuracy; some are not concerned about “surface reading” of the clues. In fact, one may have hardly any hunting experience and yet he can declare himself as a CoC!

It is not surprising, therefore, that there is a wide gap in terms of quality and accuracy in treasure hunt questions among the many CoCs in Malaysia. The result is what one might term as the different “flavours” or “style” of the CoCs.

Some CoCs are very strict in the questions—they obey the cryptic clueing rules religiously and pay special attention to details. A tiny grammatical mistake would spoil their whole day! Others are not bothered with details—they set a hunt, gather the crowd, hope that the hunters would accept their answers somehow, and then call it a day. Their answers and explanations are loose and grammatically wrong. And even the questions and tulips are plagued with spelling errors.

Q4) The French goes to a dead end.

Cryptically, not a very frightfully difficult clue. I set this question knowing very well that many in the audience would be able to solve the cryptic side of the riddle fairly quickly. No—the challenge for this question is not really about its cryptic-ness. Rather, it is about general knowledge. But first, let’s deal with the decoy.

But I do not claim to know the language! I just know the above from doing cryptic crosswords. Therefore, if there is anything wrong in my translation, someone please correct me!

It means that we need to link some letters to others in the sentence.

MATI is the Malay word for DEAD. Yes, in Malaysian treasure hunts, hunters are constantly reminded to think in English and Malay. No translation indicators are required and the questions are still considered fair.

Now we use the charade operation to get:

And the answer is therefore POLIKLINIK LAI.

I don’t know about the style of other CoCs. Maybe they would be pleased with themselves when setting questions with intended answers such as this. But I will have none of it!

When we need to take only some of the letters from a given word, I don’t think it is fair to expect the solver to find its synonym (s) and then extract those letters therefrom. There would be no end to the possibilities!

That word SOME is a hidden-word indicator. It means that the solver is required to take only some letters from the adjacent word (s). In this case, it may be ON or NE (from ONE). But instead, the solver translates ONE into SATU first, and then take SA to satisfy that some. I do not condone this kind of nonsense!

So let us now look at the clue again in light of this fresh point of view:

THE French goes to a DEAD end

This is where the general knowledge part of the riddle comes in. Those who can still remember their elementary science will know that LEAD can mean a metal, otherwise scientifically known as PLUMBUM and symbolically known as PB.

Of course it is also possible to google up the word LEAD and Wikipedia will very quickly give the required information. But the trouble is that I did not reveal the requirement of general knowledge, and so some of you might have forgotten to check the other possible meanings of LEAD! 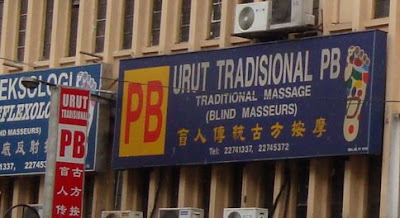 I would like to hear your opinion on this.

The French goes to a death end.


Siap is a French company making cameras. They might not be extraordinary, but we can't run away from that fact that SIAP = French.


We can say we are in a death end for solving the cryptic clue.

We can say we are in a jam for solving the cryptic clue too.

Don't get me wrong, this query is just for education and learning purpose.

Sorry for this late reply, but I just arrived home.

Yes, you are correct, The French might not be extraordinary...

BUT yes, we CAN run away from the fact that SIAP is most certainly NOT "THE FRENCH". SIAP is a French company, I can agree. But to actually equate SIAP to THE FRENCH? I think struggling with cryptic madness for one week might have caused serious confusion on you my friend!

Oh! One more thing before I continue revealing the other answers, CK Loh.

I think I know why you failed to solve Q4. But I don't blame you, some people are just not very detailed.

Read the question again. Now get this straight; I said DEAD END, not DEATH END.

While everyone else probably found the word: LEAD, you arrived at LEAH.

Naturally you won't get PB from LEAH.

You are inaccurate to assume that I do no see a dead end = AD. The fact is, the first thing, I saw the clue, I was looking for AD and whilst I am considering both 1+3D and 3D, both ends with TIGAD, whilst I google I can't relate TIG to French. But unfortunately when I google SIAP, I saw it is a French company.

I did know the common cryptic clues The French means LA, LES and LE, and I am sure LAI is not the answer. And yes, I did see LEAD, and try to look for the synonymn of LEAD, both English and Malays, unfortunately, I didn't saw LEAD = Plumbum = PB, althought I have solve similar clue before in actual hunt. I have no one to blame but myself. I agree that your clues are well-crafted, and I am defeated for this.


However, I want to see whether you accept

The French goes to a dead end = SIAP 1 JAM


Yes, I agree the French company = SIAP is better justified. The French = SIAP is not that accurate, if not wrong.


But I did recall one of your clue


Your opinion on the clue is sometime accuracy can be compromised, as long as the other parts of the clues are tight. And you have not fail to use this example, when you give review on other COCs clues.


all for the reason of making the clue more interesting and challenging. I can agree on that.

2) Partially dry acid at this retail outlet?
- again PH ONE = acidic not acid

all for the reason of making the clue have better surface reading and make it more challenging to be solve. I can agree on that too.

But base on this two precedents that you set earlier on, actually it opens to other possibility on your clue. And base on the two precedents, once I see a dead end = 1 jam, and I google SIAP = French company, what you think it came on my mind? Yeah, ckoh compromise the accuracy of the French instead of the French company to have better surface reading and more challenging to be solved.


Bear in mind, this is not a normal treasure hunt, where a few hours are given to solve all the questions. And on the competition format, that you intended, there is no time for me to keep in view of SIAP 1 JAM, and try to find the better answer first.

At that time when I submit my answer, I think that 1 JAM = a dead end is tight, and base on the earlier precedences that you set, the French = SIAP can be compromised on the accuracy.

So, if you can't accept SIAP 1 JAM, what is the boundary? As you can compromise the accuracy for PHONE = ACID not ACIDIC as long as other clues fit. Why not SIAP 1 JAM?

Again this is for education purpose for the benefit of other hunters.

Thanks for your comment. Oh! well, how am I gonna answer you?

Let's start with my assupmtion that you didn't see LEAD. The reason I assumed so is because in your first comment above, you gave the question as:

The French goes to a DEATH end.

And then in the following paragraphs, you kept using DEATH instead of DEAD. Would you say it's reasonable for me to assume that you did not realise that the word in my question was DEAD and not DEATH?

How can you compare my PHONE with your SIAP? Think about it carefully: pH1 is a measurement of acidity, yes, but it is most certainly an ACID too, isn't it? Or are you suggesting that pH1 is an alkali?

As I said earlier, would you accept SIME DARBY equated to THE MALAYSIAN?

Put SIAP 1 JAM together with PB. Can you tell me honestly that they're equally good? Or would you say that PB is much more superior?

As for your rush to beat the rest to submit your answer first, I can't help you there. I have repeated so many times that this is about how fast you can submit the correct answers. You cannot blame the time for submitting a wrong answer, because like it or not, others have successfully submitted their correct answers much faster than you!

A very strong master hunter I know has failed in 3 out of 7 questions in this hunt. And one of the factors that led to that failure was because that master rushed with the submissions. But later on, that master was able to solve the question anyway. I have warned everyone to check your answers before submitting to me. Is that not fair enough for everyone?

Oh yes, you brought up the "extraordinary" question again. So please allow me to respond.

Are you implying that just because the song did not make it to the top of the US Chart, I'm being unfair when using that song for my question?

Are you saying that just because that song did not make it to the top, it follows that it's too far-fetched to expect the solver to crack the riddle?

Let me tell you, my friend, 8 people solved that question. The winner of this hunt was unable to solve Q1 until just 2 days before the close. That winner took the time to break the clue. If you rushed with your submission, you only have yourself to blame. The result speaks for itself. The question IS solvable! And if you have allowed yourself to go on a wild goose chase and then ended up in a dead end, who do you think is at fault?

I have explained the omission of apostrophe S in the clue. That omission, although is a violation of grammatical rules, is an established trick in the cryptic clueing world.