Sabah is home to numerous unique and rare animals such as the Proboscis Monkeys, Sumatran Rhinoceroses and the Borneo Elephants, to name a few. However, some of these animals have declined in population over the years, and now classified as endangered species. If we are not careful, by the next generation the only place we can see them is in the zoo.

It has been estimated that the current population of the Borneo Elephants in Sabah had dwindled to only 1,000. In recent years, as more lands were opened to make way for oil palm plantations, the Borneo Elephants' natural habitat was quickly reducing in size. 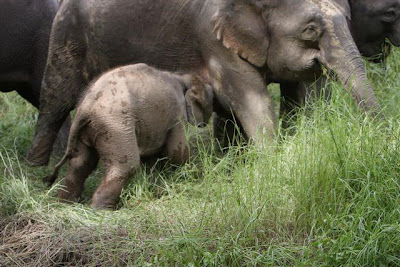 Yesterday, during our Rotarian meeting, a fellow Rotarian, Mr Toshinori Tsubouchi, a Japanese consultant attached to the Borneo Conservation Trust, showed me some pictures, taken during one of their field visits in the vicinity of the Menangor River in Sukau. The above picture shows a baby elephant with its mother. It is good to know that the elephants are still breeding.

But this next picture is very disturbing—it shows the baby elephant is suffering from a serious injury on its right fore limb. It was caught in a wire trap set by oil palm plantation workers. Although it was able to escape from the trap, its limb was beyond help. 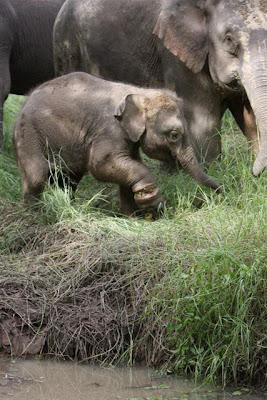 How my heart broke when Toshinori told me that they had no choice but to put this baby elephant down. Chances for adaptation with only 3 legs were too remote for a sizeable animal like this elephant. It would have died a slow and painful death.

This land has been the home of the Borneo Elephants since an estimated 18,000 years ago. But their world has become gradually smaller over the years because of human intrusion into their habitat. In the end it's the Borneo Elephants that have become the intruders of the human plantations.

Toshinori is facing an uphill task, but I hope these brave people will be successful in saving the last of these rare animals.

It's shocking how rapidly their numbers have declined. Rhinos and organ-utans too.

Yes, Shan, the population of the Sumatran Rhinos is estimated to be about 300 only. But because they are usually living in isolation, it is getting very difficult for them to meet each other in the jungle to reproduce. They might no longer be around in a few decades' time.