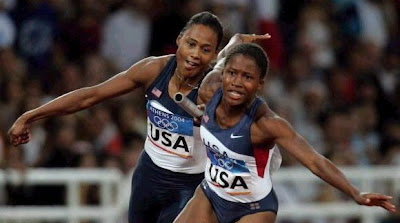 Olympic Games 2004: Lauryn Williams, as the anchor for the USA's Women's 4x100 Team, messes up with the baton 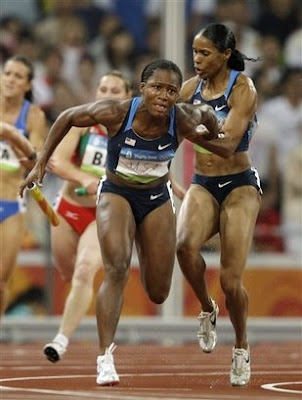 Olympic Games 2008: Lauryn Williams, as the anchor for the USA's Women's 4x100 Team, messes up with the baton


Lauryn Williams ran in the Olympic Summer Games 2004; and she ran in the 2008 Games too. As the anchor for the Women's 4x100 Team in 2004, she messed up with the baton which Marion Jones tried to pass to her. Four years later, yesterday, history repeated itself—she dropped the baton again and her team never made it to the finals of that event.

I am not well-versed with the track and field training, but I'd reckon that by the time she ran in the 2004 Games, she must have practised the baton-passing several thousand times. And then after the disaster of that 2004 Games, I'm sure she must have practised the baton-passing many thousand times more. When you've gone through such a lousy experience, you'd want to remedy your mistake and come back strong this time. Maybe she has even perfected the passing to the extent of being able to do it in her sleep, so to speak.

What's the odds of the same mistake happening the same way, with the same team, with the same person, twice—consecutively in the same Games? Bear in mind that we're talking about professional athletes here.

Mia and I were having dinner when yesterday's event was broadcasted live on Astro. While the participants were getting ready, I said to Mia that Lauryn messed up 4 years ago; and I was pretty sure that she must have perfected the baton-passing by now. So you should have seen how my jaw dropped when she dropped the baton again.

But, y'know, she's only 24 years old now. Who knows, perhaps if she's not kicked out for good, she might just come back for the 2012 Games at the age of 28 to repeat the mistake for the third time? That would be something, huh? I'm sure it won't be easy to beat that kind of record.

My heart goes out to Lauryn. I hope she remains strong. Never give up. Try and try again, and I'm sure she'll get it right sooner or later.