Last Sunday was Girlie's wedding party which was held at the Beverly Hotel. It was just a small gathering of about 100 people. It was scheduled to start at 7pm sharp, but of course being true to the Malaysian style, we only started at around 8pm.
Actually, the akad nikah was held last Friday. I was unable to attend, but I've seen the pictures taken during the event. Apparently my younger brother, Dennis, was one of the witnesses (saksi). I saw Evelyn in the pictures too. I can imagine she must have been a bit out of place when all those prayers were performed, since she's the only one there who's not a Muslim. So out of our siblings, A to E were there except for C (myself).
I was given to understand that everything went well during the akad nikah. Except, of course, for the part where Bridget and mom cried uncontrollably when Girlie was eventually "given away" as the wife of someone else. Don't know why cry to that extent! Women! 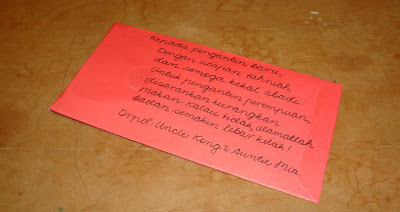 Girlie (Amanda Christie) is the second daughter of Bridget. Her older sister, Chaboh (Amelda Diane) was unable to attend as she had to sit for her exams in KL. In fact, she's been there for some years now. Girlie is the first of my nieces and nephews to get married. So this was a big thing. Even mom flew all the way from Vancouver, Canada to attend. Before leaving for the party, I prepared an angpow. And of course being the mischievous uncle, I couldn't help including a bit of advice on the angpow itself. Perhaps those of you who can understand Malay, would like to click on the above picture to see the message from Uncle Kong. 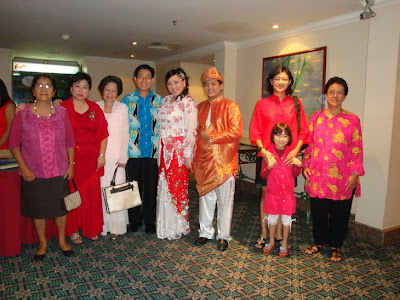 From left to right: Valentina (mom-in-law), Bridget, mom, yours truly, Girlie & hubby, Mia and JJ, and Patricia (sister-in-law).
We arrived at about 7:05pm and found Girlie and her groom at the reception lobby. Mom was there too. This time we had an almost complete member, A (Audrey), B (Bridget), C (Cornelius), D (Dennis), E (Evelyn), G (Grace) and H (Harry) were there. Flora was unable to make it. She's in Brunei. 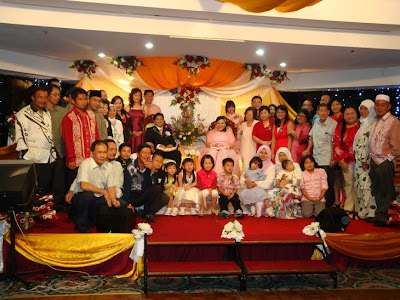 I must say that it's a bit rare, but they somehow managed to set up the pelamin in the banquet hall for the upacara merenjis. And then after that, we had a group photo taken. It's quite a wonder that the pelamin could withstand our weight. 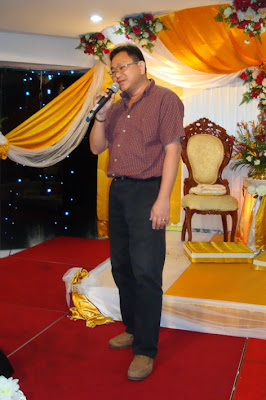 Later on, we had the karaoke session where several people took turns to sing their favourite songs. And then Dennis went up to sing, of all the songs, Only You. It was quite OK, until that part where he went, "Oh-on-ly you..." I'm sure the hair at the back of my neck stood up. But luckily the banquet hall was quite dim that night. But when he had finished singing, mom ran out and gave Dennis a hug. The rest of us watched in horror. 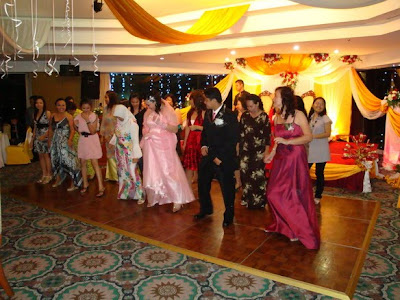 And then, not to forget the poco-poco dance, which I really don't know how it became almost the Malaysian culture these days. Who the hell invented this dance anyway? By the way, that huge thing in the middle of the crowd in pink is Girlie (see Uncle Kong's message on the angpow again.) 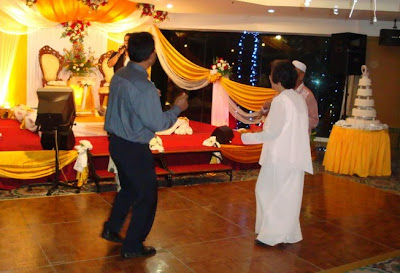 I thought it would never come, but in the end, we had the joget. And another surprise of the night—mom did the joget with Audrey's hubby, Azmi. I never knew that mom could do the joget. And of course she couldn't! I don't know what was that she did. I think it was a mixture of ballroom dancing and tango. But she completed the entire 10 minutes' worth of joget, which was quite admirable, really.
They were still happily singing the karaoke when I left at around 10:30pm. I was so tired because I did not quite catch the sleep I wanted to since the 20km run first thing in the morning.
Well, there goes Girlie—off to a good start on a married life with her policeman husband. I just hope that she won't beat up her husband too frequently. Oh! by the way, they're settling down in Pahang after all, not Terengganu. Phew!
Posted by Cornelius at 8:51:00 PM

It sounds like a fun time was had by all!
I like the way you and your siblings are named alphabetically... :)

I wasn't involved in the organising of the event. But I can imagine their exhaustion. So many things to do. I think only mom enjoyed it to the fullest. Like I said, she enjoys that sort of thing. But in the end, yes, it was a lot of fun time for everybody.

Regarding our names in alphabetical order, that's quite unique. For many years, I could say "Eight Is Enough" based on the title of the TV show. But that was when I thought Harry was the last of my siblings. Little did I know that dad was still productive and went on to add a few more up to L (Lazarus). But that's a different story.

This is a bit embarrassing, but I just received a text message from my niece, the walking calculator, Amelda. She said L should be Lorenzo, not Lazarus.

Oh well, I must've gotten that name confused with our neighbour in Nosoob Baru named Lazarus.

I explained to my neice that uncle Kong is getting too old and forgetful. Lazarus, Lorenzo, Zorro, they all sound the same to uncle Kong.

Tells a lot about how little uncle Kong knows about his family matters. I really should learn to mix around with my other siblings a bit more so that I can gossip a bit more. Maybe that can help.

By the way, the last time I saw Lorenzo was when he was about a year old for about 5 minutes. If I'm not mistaken he should be around 4 - 5 yrs old now. Funny world, huh?

Wow. Your father's wife must be much younger than him, I guess!

No doubt there are reasons why you're not close to some of your family. I'm sorry, whatever the reasons are. :(

Dad's Number 3 should be at least 10 years younger than me. She should be approaching her mid thirties in a couple of years' time. Quite frankly, I don't even know her surname.

I'm keeping my fingers crossed on the productivity of Number 3. She's still young and very productive. There are still plenty of letters of the alphabets left for naming our family members. I hope Number 3 won't be encouraged to try to use all those letters.

It's a long story why my relationship with my dad has come to be what it is now. But perhaps these can help give you some idea:

I get the picture now.
I guess your dad suffered abuse from his stepdad and then passed on that pain to his own family. Maybe he is bitter and that's why he doesn't take responsibility for his actions.
I admire the way you have broken that cycle with your own family.

"I guess your dad suffered abuse from his stepdad and then passed on that pain to his own family."

That is a popular excuse; I'm sure dad would be fast to use it! Looking at dad as he is today, I'm not so sure he'd be any better as a parent even if he had had a wonderful childhood. It's just not him.

I see it differently. Because I had a lousy childhood, I am determined not to put my own child through the same thing.

Whatever happened to me when I was young has no bearing on my responsibility to be a good parent to my child. I'm sure many average people are like that too; it's parental instinct. So, really, there is nothing to be admired.

You're right, it isn't a good excuse. But it seems to me some people are too in denial about themselves to come to this realisation that they are responsible for themselves. These are often the people who are also deeply and blindly religious!