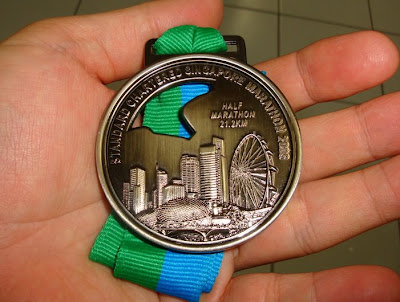 It must have been at least 10 years since the last time I visited Singapore. I’ve been to many other places around the region, but I somehow never found a good reason to visit Singapore—until I signed up for the Standard Chartered Singapore Marathon 2008, which was held last Sunday.

When I signed up for the Singapore Marathon, Mia decided to sign up too. And it was her very first half marathon. When I ran the half marathon in my hometown, Kota Kinabalu in October, I completed the 21.1 km in 02:03:57. So when I flew to Singapore last Friday, my mission was to complete the half marathon in under 2 hours. I tagged along JJ and my mother-in-law, the official baby-sitter of the trip.

Mia and I went to collect our race packs on Friday afternoon, and we were pleased to find very few people there then. We did not have to go through long queues. We merely showed our identity cards, and then within two minutes we were already leaving the counter with our race packs.

We put up in Victoria Hotel, which’s located at Victoria Street, some 900 metres from the start line of the marathon. On the morning of the event, we woke up at 5:00 am. We left the hotel at about 5:45 am. It was very easy to find our way to the start line as there were so many other runners heading there.

As we approached the start line, there were a couple of DJs blaring through the huge speakers and there were loud music in the background. Apparently there were 12,000 runners for the half marathon. Unlike the Penang Bridge Marathon, the men and women were flagged off at the same time, i.e. 6:30am.

There was silence 20 seconds before the start of the race. Then the countdown; and finally the start horn. It took us about half a minute before we finally passed the start line. I turned to Mia and said that I was going to try to make that 2 hours target. Then I eased into my comfortable pace of about 5.5-minute per km.

The weather that morning was perfect. We zig-zagged through the city streets before turning to a long stretch heading to a straight bridge. The first half of that bridge was quite tiring as we had to go through a long gradual climb. Thankfully, it wasn’t as punishing as the one in Penang. But still, you know, as the miles built behind me, I began to feel the exhaustion. I made several stops for drinks, but otherwise I continued running throughout the course. 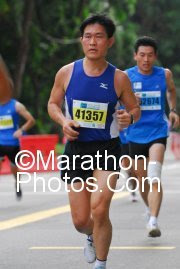 I copied this photo from the official website. It's just a sample photo. I didn't do well in this event, so I reckoned I'm just too cheap-skate to pay the astronomical price they're charging for a high-resolution digital photo.

As I was making the return leg through the bridge again, I was already fighting very hard the inclination to stop running. That’s a dangerous point, because as any runner would tell you, once you stop, it’s extremely hard to start running again. So I reduced my pace instead. Step by step… slow and steady…

Then I came to the 16 km point, and I felt horrified by the thought of having to run 5 km still. Then 17 km and soon 40 km (this latter sign was meant for the full marathon runners, i.e. only 2 km remaining). At that point I looked at my watch and realised that I only had 8 minutes left for the 2-hour target. It was quite obvious at that point that I was going to fail again. I kept trying for the next best thing, i.e. to improve on my previous 21 km time somehow.

Very soon, I was already making that last turn, and I could see the arch where we were flagged off about 2 hours earlier. I increased my pace. And then I almost fainted when I realised that that was not the finish line after all! Instead of 21.1 km, the “half marathon” distance in Singapore was 21.2 km. That extra 100 metres was so tough on me. But I ran as fast as I could anyway and arrived at the finish line at 02:03:08. 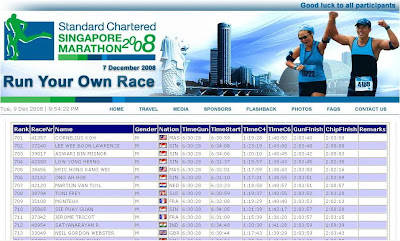 A screenshot (click on the picture for a clearer view) of the results taken from the official website. Overall position of 701 out of 6,399 men who ran in this event. I'm afraid nothing to shout about. Hopefully if I try again next year, I can improve that to top 600 runners (smile).

I’m disappointed to have failed yet again, but I consoled myself that I have at least shaved off almost a minute from my previous record. An ideal opportunity to go under 2 hours wasted just like that. The weather was perfect; the terrain was equally good. The people cheering from the roadsides. Everything was perfect! Yet I wasn’t good enough.

The next mission would probably be the KL International Marathon. But I was told that there will be slopes. I dread the slopes, and I doubt that I will be able to improve on my time. If anything, it’s likelier that I will take at least 10 minutes longer to complete the race. But I’ll probably have to do it anyway. I must keep myself prepared for an attempt for the full marathon in October 2009.

Keeping my fingers crossed…
Posted by Cornelius at 7:16:00 PM

I forgot to say that Mia did well too in her half-marathon debut. She completed her run in 02:42:28. She was disappointed with her run, but she was pleasantly surprised that she was still entitled for a finisher's medal!

everything was perfect on the day except probably ourselves.

Myself also encounter problems along the way.

Right now I'm thinking I'm certainly gonna be there in
Singapore next year. But I'm sure as hell not gonna do the miles and miles walking at the zoo prior to the race.

By the way, congrats on running a sub 2-hr 21km. Very good time for a first timer! I'm inspired! I must work harder for next time. But for now I'm taking a break to allow a bit of time for my ankle to heal completely. Otherwise it will just become harder and harder to achieve my goal.

Are you inspired enough to go for the full marathon 2009 ? I know I am. I simply must have that finisher's T !

Yes, I am inspired to go for the full marathon. But I want to be sure that when I do it, I'll be able to complete it. I will probably want to set a time target too, but that is only as a guide. I shall not forgive myself if I'm unable to finish the run.

I'd like to do my very first full marathon in the Borneo International Marathon in my hometown, Kota Kinabalu, in October 2009. Which means an approximate 10 months to train. But before that I also want to run a couple more half marathons to try to achieve the 2-hour target for that event.

I have a feeling that if I can complete a full marathon, I won't be doing many more fulls. The one in BIM2 might even be the first and last for a very long time!

No need to feel disappointed. I remember that you have a 100% medal finishing record - that to me is an achievement in itself. Congratulations!

Thanks, 2R1I, for your kind words. 4 medals so far. But maybe our friend, Chai, was trying to kill me when he suggested that I try to collect 100 medals!... hahaha!

Am taking a short break from serious running (though I will surely continue training!).

Going for the Mensa Hunt this Sunday. Then next Saturday/Sunday, I'll try to finally find the time to set a training hunt for my team members. Hopefully, will be able to give them a hunt around year end or early next year. I hope they're able to spot a direct anagram by now.

You are still young, so 100 medals is not a fantasy but can be a dream. Give yourself ten years from now and average 9 races per annum and you are already there. These 100 medals would make a very meaningful retirement gift for yourself or money-cannot-buy kind of dowry for your JJ :) I wish I am as young as you are.... sigh !

Thanks, KK, for the encouragement, but I'm not even sure that I can keep up with 9-10 runs per year - and with the assumption that I will certainly get those medals in each run! But I guess you have a point - 100 medals appear to be achieveable if you look at it that way.

Not too sure about your idea of dowry for JJ though. If ever I can complete the 100-medal target, I have a feeling that it will take quite a lot to make me part with them!

Congrats to your medal finish in the Singapore Marathon.

I can see that you were disappointed for not breaking your personal record. I guess it really means a lot for you to achieve it.

You still have the "golden goose", if you take good care of it, you will get more "golden eggs" in the future.