The Mensa Hunt 2009 was held yesterday morning. I touched down at LCCT-KL at about 3:00pm on Saturday. I took the bus to KL Sentral Station, and finally checked in to Hotel Florida at almost 5:00pm. 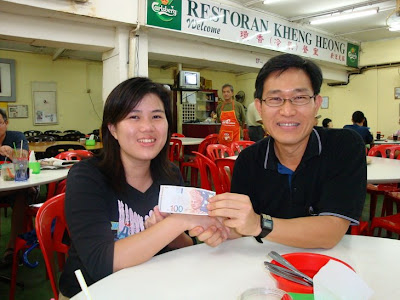 Later that evening, I received a call from Claire. She was together with Teck Koon—they had just attended the Mensa Hunt briefing. They got stuck in the traffic jam, but finally arrived at the hotel at around 7:00pm. Then we went for dinner at a closeby restaurant where I was finally able to present the hard-earned RM100 prize of my virtual hunt to Claire. In return, Claire was kind enough to treat Teck Koon and I for dinner.

We were very excited about the Mensa Hunt and throughout dinner, we were trying to anticipate the types of questions and treasures etc. I had obtained the Mensa questions for 2004 and 2006 by the same CoC. In fact, that was the main reason why I took the trouble to join this hunt. From the past questions, I found the style very appealing—they were mainly cryptic in nature. Furthermore, some very strong master hunters have also regarded the Mensa Hunt as one of the 4 “majors” of the year. That’s why I simply had to find my way into this hunt.

The night passed quite uneventfully; and before I knew it, it was already 6am the next morning. The plan was for Claire and Teck Koon to come and fetch me from the hotel at 7am. By 6:20am, I was already sitting by a roadside stall and eating roti telur complemented with Teh-C ping. Then I rushed back to the hotel to pack the very little that I had to pack.

As I was brushing my teeth for the second time that morning, I received a call from Claire. She said that they’re gonna be late—that to expect them at 7:30am instead of 7am as initially planned. Apparently Teck Koon went to the petrol station to top up his fuel, but when he wanted to start his car again, he somehow twisted his car key and broke it. Well, not really broken into 2 pieces, but obviously twisted and was barely in one piece. So in the end, he called Vincent up and the latter was kind enough to fetch Teck Koon home to get his spare key.

So anyway, they reached the hotel at almost 7:30am, and we went straight to the starting point of the hunt. Well, actually not really straight—I had a shrewd suspicion that Teck Koon was all out to scare Claire and I that morning. He went into a wrong road somehow and we had to make a big turn to get back to the right track. Claire was well-equipped with road maps etc, and while I was panicking in the backseat, Teck Koon was again able to find his way back to the correct road. All those unnecessary excitement in the morning. But, people, y’know!

After all those adrenalin-pumping adventures first thing in the morning, we made it to the flag-off point in good time for the final briefing. One final quick visit to the toilet and then we were flagged off soon after. And then we immediately stumbled upon the first question. Perhaps it was because of the excitement that caused serious blindness in all of us that morning, but we eventually left that first sector without anything to show.

Having said that, however, I must say that I was disappointed with the questions given in the Mensa 2008. They were nothing like what I had expected. Perhaps about half of the questions were googling challenge. So those who had fast internet access would be advantaged. I have written in another thread that general knowledge questions are no longer a big deal these days. My team did some googling too, but the flow of information was of course slower through cellphones.

As for the cryptic challenge, I found very few of them worthy of a Mensa hunt. Nonetheless, we were beaten in 2 of the questions, namely one which was just a simple direct anagram which we failed to spot on a parking meter; and another which was the only beautiful question of the entire hunt, but quite easily solvable had we been able to spot the word “bold” on the signboard.

Apparently the CoC set up quite a number of “red herrings”, except that not even one of them had any impact on our team. Somehow we reached the sectors, spotted perfect-fit answers, and just left in a jiffy without even considering any other possible answers!

I was also disappointed that in spite of the quality of the questions in the past Mensa Hunts, I found some debatable points in the solutions of the CoC for Mensa 2008. But as usual I will discuss them separately in other threads shortly.

The treasure clues were also all too straightforward. It’s almost as good as just simply telling the hunters to go get the stuff in the supermarket; nothing cryptic whatsoever. Well, except for the last treasure which caused a bit of a stir, and of course the CoC made a mistake when he accepted an obviously wrong submission.

Apart from the 2 route answers which we failed to spot, we also failed to solve a puzzle. Beyond that, there was hardly any challenge for this hunt, except that it was so difficult to find the lightbulb. I did not find it amusing that the treasure clue, once broken, should be hard to find in the shops.

Well, in the end, we dropped 2 route questions and the puzzle. I have very high respect for my team members, but I had expected tougher questions to be worthy of a Mensa Hunt. As a comparison, when we hunted in Jayaram’s hunt, there’s just no way that we’d only drop one or two questions. Dropping half of them would be more like it. Maybe the grandmasters would at least drop several questions. But I have a feeling that several teams in the Mensa 2008 got perfect score for the route questions. For this reason, I did not consider its ranking as a “Major” in the hunt calendar.

We scored 130 points from a maximum of 140 points—too good to be true for a Mensa Hunt! Whatever it is, and no matter what’s our position, I must say that I enjoyed hunting with my team members, and I’d gladly hunt with them again. Although I’m disappointed with the questions, I am even more disappointed for failing to solve a numerical puzzle!

Who knows, perhaps someone should come up with a hunt that is really worthy of being the fourth major of the hunting calendar?
Posted by Cornelius at 8:11:00 PM