About 15 years ago, during the launching of the Grace Court development, I decided to buy a small apartment on the first floor in Block C. Mia did not like the idea, because she said she's not very keen to live in an apartment. I explained to her that I, too, had no intention to live in an apartment. Rather, I foresaw that the Grace Court would become quite sought-after several years down the road, having considered its location within the Sembulan neighbourhood. Reluctantly, Mia went along with my plan. And so we eventually bought a unit there.
All along my main plan was to let out the unit, and it so happened that in the nearby commercial portion of the development, there was a college. And college meant students, i.e. a good source of potential tenants.
I have had several tenants over the years, but I eventually settled on a group of female students from the college. I spent a bit of money to furnish the apartment, e.g. double-decker beds with mattresses, a cheap 21-inch TV, a sofa and dining sets, several desks and cupboards. I also provided a fridge and a cooking stove. On top of that, I was also responsible for water and electricity consumptions, as well as minor repairs. I must say that the rental income has been quite good.
Before I let out the unit, I spoke to some friends who had invested in similar properties. And almost all of them were unanimous in their advice. They advised me to try my best to look for female students. Male students are OK too, but they're likely gonna damage my apartment. According to them, boys are messy creatures; they smoke and create lots of troubles for the neighbours, resulting in many, many complaints. All too scary, you see.
Well, I thought I should heed my friends' advice and took so much pain to look for a group of girls. But to be quite honest, I was never really overly concerned about my apartment. I had planned to improve the condition every now and then, and I had expected that there would be periodic repairs to be carried out. After all, it's not like I had any plans to live there one of these days.
And so, to make the long story short, I managed to find a group of girls. And once the apartment was let, I hardly ever set foot in the unit. Each time I collected the rent, I went as far as the front door, and was only able to get a glimpse of the inside. I had no idea what the rooms looked like. As long as they paid the rents, I was quite happy.
However, those girls eventually finished their studies, and after getting themselves established, they're moving on to buy their own apartments in other areas. So they have given me notice to terminate the tenancy. I of course foresaw this coming, but I was glad that it's been about 5 years since they started occupying my apartment. Last Sunday was the day they were supposed to move out, and I made the appointment to come around to refund their deposits as well as inspect the apartment.
When I arrived at the apartment at around 4pm, they were just about to start packing. Apparently they had an arrangement with a friend who would help them move their stuff with his truck. For the first time in ages, I was able to enter my own apartment to inspect its condition.
Well, maybe it's just me, I don't know, but let me tell you that not all girls are neat and clean. At least not this group of girls! There were scattered private garments all over the place; the messy bedrooms; the horrifying kitchen and bathroom. But of course these girls were moving out anyway, so I guess one would expect the place to be somewhat messy.
Then it occurred to me to check out the fridge. It was still filled with a whole bunch of stuff ranging from unfinished food, drinks and tidbits of probably several months old. At the top most compartment, the thickness of the ice indicated that it's been left that way for ages. And in it was a can of soft drink, opened but unfinished. Although I can't confirm it, I suspect that it's been there in that same position for months. I looked back to the girls who were still sitting on the sofa, totally absorbed in watching their favourite programme on TV, and asked if they would mind if I snapped a photo. They merely burst out laughing. 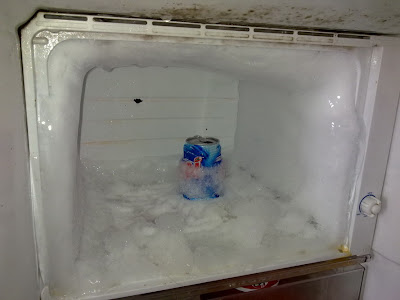 While I was clicking away with my phone camera, they were kind enough to inform me that they had started to defrost the fridge since morning. So I can't imagine what it was like before they started defrosting the fridge. 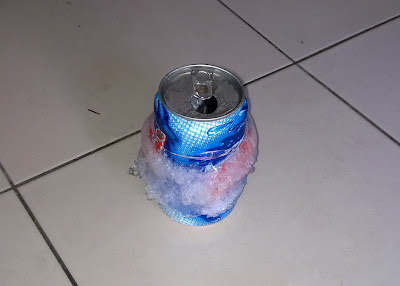 And with a bit of effort, I managed to dislodge the famous soft drink to take this photo.
So, folks, if you ever plan to invest in a property and are looking for tenants, don't bother too much with insisting for female, as opposed to, male tenants. It's not really worth the trouble, I tell you!

Thanks for sharing this bit about tenants,female tenants to be exact.
Like you,I also had my fair share of tenants,male and female.

I had the fortune or misfortune,depending on how one looks at it,to rent out for the past 2 years,an apartment on the ground floor to a group of 5 ladies who used to work for a restaurant.Just recently,they have to vacate the premise because their boss,who provided the accommodation for them, decided to close down the business recently.

Being ladies and mostly from the rural areas of Sabah,I gave them credit for maintaining the place decently clean and presentable but there is one bad habit of theirs which they can never change,that is, the disposal of their sanitary pads after use right down the toilet flush system after use.

Such actions have resulted in many frequent blockades of the toilet system which requires clearing works by the plumbers a few times at my costs.I have tried reasoning with them and putting up notices in clear English language,warning them against such acts but to no avail.

I was told that these ladies were too embarassed to dispose of their used sanitary pads by throwing them away in the dustbins because there are scavengers who used to go through all the dustbins in the housing area looking for plastic bottles and tin cans.

I do not know whether any other landlords have experienced similar problems like me but nowadays I have rented the apartment out to a family who happens to have teenage daughters but I hope that they will be better taught by their parents on proper hygiene and disposal of sanitary items.

Oh that's an interesting coincidence, Socrates29. The girls who rented my apartment were also from the interiors. But then again, I don't think it has anything to do with where they're from. It's just plain lousy habit!