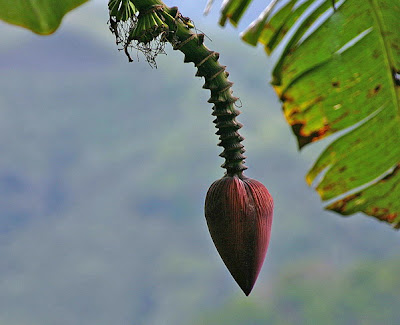 If only I could charge some sort of entertainment fee every time I make my wife laugh, she'd owe me quite a hell lot of money by now. We've been married for a little over 18 years. If I were to include those courting years, it'd be more than 20 years. Oh yes, she'd owe me a hell lot of money, I tell you!
I must admit that I sometimes can't control my sense of humour; and I can't resist the temptation to make people laugh, you see. But sometimes I don't even mean to be funny, yet people would find what I say or do very funny all the same; I don't know why, maybe it's some sort of blessing—or curse. Such was the case when I once tried to explain to Mia about jantung pisang.
Jantung pisang are of course Malay words which can be translated literally to banana's heart. Now Mia's general knowledge, as far as things like plants and machineries are concerned, is not so good. And it happened that she did not know what a jantung pisang was.
She was like, "What, bananas have hearts too?" and started smiling.
I told her quite seriously that there's indeed such a thing as jantung pisang. But Mia was not convinced, she thought I was just kidding. At that particular moment, I could not locate a banana tree, but I was determined to describe to Mia what a jantung pisang look like.
So I started describing that there is usually a long rugged stump sticking out of the banana tree. In fact, that stump is a part of the fruits. And at the base of that stump, usually one is able to see a bunch of hairy stuff, you see.
As I was describing to Mia, she started laughing. And as I went on describing, her laughter became louder.
Just as I reached that part about the hairy stuff, she interrupted me and said, "Yeah, I know, at the end of that stump, there is something of a bulge which is reddish or pinkish in colour—sometimes even purplish in colour, right?"—all the time laughing uncontrollably.
I said, "Hey, how did you know!?"
And then Mia laughed hysterically!
Yeah, I think Mia would owe me a lot of money for all those years of laughter, including those times when I did not even mean to make her laugh!