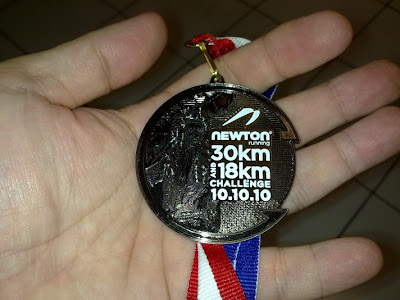 What a race! It's been a few months since I ran the full marathon in the Borneo International Marathon (BIM) in May this year. Since then I have done a half marathon in the Singapore Bay Run about 4 weeks ago. And of course I have done several other half marathon distances during my training long runs. But running a race pace is quite different, at least to me.
It wasn't very long after the BIM in May when some of my runner friends decided to join the Penang Bridge International Marathon (PBIM) on 21 November. Although I've had a lousy experience running the Penang race, Judy and Teo gave mainly good reviews of the race when they joined it last year. So I ended up signing up for the full marathon in Penang.
However, because of the long months between the BIM and the PBIM, I was kinda worried that I would become lazy to keep up my training. So to force myself to maintain my workouts, I signed up for 2 other races in between, i.e. the Singapore Bay Run (21km) and the Newton 30Km Challenge.
When I signed up for those other races, I meant to use them only to motivate me to keep going, not so much to attempt to improve on my records. But unfortunately, I couldn't resist the temptation to try for a record anyway!
In the Singapore Bay Run in September, I barely managed to improve on my personal best (PB), but failed to achieve what I really wanted to do, i.e. to run a sub-2hrs half marathon. Incidentally, the Newton 30km was just 4 weeks after the half marathon. The Sunday immediately after the half marathon race, I ran a 27km long run to try out the compression tights I just bought. It felt great. Then with three weeks to go for the Newton 30km, I had planned to taper down with a scheduled 20km, 12km and then Newton 30km race.
Then the KK adiNation group scheduled a 30km long run on the Sunday when I was supposed to do a 20km taper run. For a while I couldn't decide if I wanted to join my friends in their long run, or just stick to my 20km plan. In the end, I decided to throw away the Newton 30km, and ran a 30km long run training 2 weeks before the race. I reckoned that I did not plan to break records for the in-between races anyway. So I ran that 30km long run, and finally, with one week left for the Newton 30km, I reduced my distance to 10km.
While I was recovering throughout that one week prior to the Newton 30km, however, I became greedy again. It seemed possible to steal a record for the 30km race after all. I felt good, and my legs seemed to be up for the task!
When I arrived in Singapore on Friday evening, I was still convinced that I could improve on my 3:10 which I achieved earlier this year. Then on Saturday morning, I went to the race venue and was pleasantly surprised to find a flat course. My confident rose another notch. I then raised the bar to a 3:05! It is funny what greed can do to people, you know!
Joining me for the race were my friends from KK, Khadeeja and Alvin. That morning, when we set out to the race venue, it was drizzling. I thought it was gonna be a nightmare of wet race. Well, we found ourselves at the race venue with about half an hour to spare.
Apparently, Alvin was somewhat intimidated by all those fashionable running outfits. So he went somewhere to the back to stretch a bit; except that he ended up in a koi pond, soaking both pair of shoes. But I will let Alvin report on that exciting experience.
Anyway, while Alvin was busy trying to dry his socks and shoes, and at the same time considering to pull out there and then, Khadeeja went off to deposit her bag. Soon it was already almost flag off time. The runners made a slow procession to the start line, and I was wondering what has happened to Alvin the whole time. Then the countdown and then the start horn.
I started out strong at a comfortable 5.5 mins per km. I felt good to break away from the crowd. But then after I reached about 5km, I realised that I needed to slow down. Otherwise I would burn out way too soon. Reducing my pace a bit, I ran a steady pace. I was quite happy to finish the first loop of 10km in 59 minutes. But the bad news was that I could already feel a bit of exhaustion building up that early. I knew there and then that I was in big trouble. I would expect to only start feeling tired after 15km-18km for a 30km race, so 10km was obviously too soon.
In between running the loops, I could seen Alvin and Khadeeja running from the opposite direction. I was still gaining on them, but I was also slowing down for a bit. When I completed the second loop in 2:03, I knew that it was difficult to improve on my 3:10.
And then the worst thing that could happen in a race happened at Km 25—I felt a sudden contraction in both thighs. I had no choice but to slow down to a walk. If I had continued running, I bet my legs would immediately refuse to move after that. That then was the story for the rest of the race—I merely walked and ran, and walked and ran to finish the third and final loop in 3:14.
Quite frankly, I can accept that I didn't have it in me to better my time. But I was rather disappointed that it had to happen that way. The cramps spoiled the race for me—it wasn't fun at all. I suppose it's bound to happen once in a while.

What of Khadeeja and Alvin? Well, Khadeeja completed her 30km in 4:25, whereas Alvin completed his in a surprising 3:51. With the little training (if you could call his few short runs "training") I would say he achieved quite a big thing!
So now, I have about 6 weeks to remedy whatever mistakes I've done for Penang. Not much time left. Another 3 weeks of serious training, and then taper for the race. For whatever it's worth, Penang is gonna be much more interesting; I'm running the full 42.2km against an opponent who is as kiasu—if not more kiasu—than me! Whoever wins, there is a lobster in Penang with its days numbered...

The least you could do is to "entertain" us fans with a shot of you in tights lah..I am sure that would be a sight to behold ! :-0

Unfortunately, I don't have any shots in my tights. I stood beside Khadeeja to take a photo just shortly before the race, but you could hardly see the tights. The photo was focused mainly on the upper portion of the body, with just a bit below the waist. So that's no good.

I was trying to see if perhaps I could find some of my photos in the organiser's website, but somehow this organiser is one of the slowest, I don't know why. In fact, I'm still waiting for my official result. But I will keep checking. Hopefully they will put all the details up soon.

By the way, I'm fairly amused that quite a number of people are curious to see how I look like in my tights. What I can say for sure is that my legs look smaller in them!... haha!