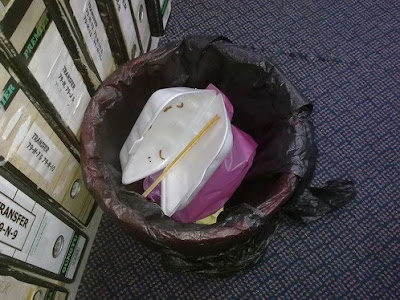 A picture of one of the many rubbish bins in my office. Most people from this part of the world would know what that white thing in the bin is. But for the benefit of my visitors from the other parts of the world, that white thing is a polystyrene (I believe known as the Styrofoam in America) container which is commonly used to pack food, otherwise locally referred to as tapau.
I wonder if anyone has conducted any research on how many tons of these polystyrene containers would end up at the garbage dumping ground everyday. Although I myself have not done any research, I bet it's possible to see at least a 30% to 40% increase in the use of polystyrene containers like the above between now and the second week of September.
Sorry, folks, no special prizes for those who can guess why I deduced such an increase.

And it is not biodegradable which means it is not green environment friendly.

So what's the reason? i'm missing the connection.

Anonymous, when you tapau, it is because you don't have time to eat in the shop or you prefer to eat somewhere else. You just want their food but you choose to eat later or at a different venue.

Between now and mid September, many people are not allowed to eat in public places. In fact, they will be fined and names published in papers if they are unlucky enough to be caught and punished as a deterrent for many others.

So I guess tapau and eat in office is the best next thing to do. So it will be the duty of their boss, like Cornelius, to enforce the fasting period in his office.

Unfortunately, most people do not realise the seriousness of how quickly we're destroying this world.

Just this afternoon, we had a very famous man giving a talk at our Rotary meeting - Datuk Harris Salleh, the former Chief Minister of Sabah. He spoke at length about trying to improve the livelihood of the rural folks. Basically, his idea was to sponsor a 1 acre land each where these folks can cultivate the land and rear animals. The latter, eg cows can produce organic fertilizers for the crops. Very interesting idea indeed.

At the end of the talk, a fellow Rotarian asked Datuk if he had considered the climatic change (since he's talking about planting crops). I found it very interesting that Datuk Harris replied that he thought that climatic change, although is a worrisome trend, should be OK for the next few hundred years!

So you see, Scho, many people are not worried about what's happening to the environment. And that in itself is worrying!

Yes, the explanation by the 2nd Anonymous commenter is correct. Muslims caught eating in public during the fasting month may be punished (usually a fine). And you'd be surprised how many Muslims don't fast! Hence, the tapaus.

As far as I am concerned, whether a Muslim eats or not during the fasting month, that is none of my business. If indeed God is displeased, I suppose He will mete out a proper punishment. But it's interesting that people are playing God by carrying out the punishment. I shall have no part in it. So, if it's lunch break, and I see a Muslim eat in the office, I shall not dream of stopping them!