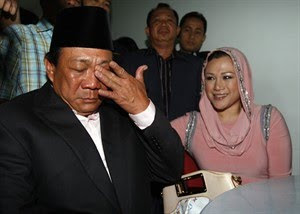 Malaysian lawmaker Bung Mokhtar Radin, left, wipes tears from his eyes after he has escaped going to jail for entering a polygamous marriage without official consent, as his second wife Zizie Ezette looks on at an Islamic High Court in Shah Alam, Wednesday, August 11, 2010.

Of course the teary act was disgusting, but, well, the Kinabatangan MP, Datuk Bung Mokhtar Radin has escaped the jail sentence. [Bintulu] This is not a surprising conclusion—obviously anyone with a bit of common sense would’ve seen it coming months ago. I fancy that the loverboy MP is having a hard time suppressing his inclination to do the middle-finger thing to his many political rivals right now, if you know what I mean.

I have no idea why these people had even bothered with the charade of the Syariah High Court trial. I mean, it’s not like there was any other possible outcome to this whole comedy? I suspect it had something to do with creating a bit of news—no matter how frightfully pathetic it is—to fill up our local papers, among the other news articles about how the BN Government had done this nation so much good.

It kinda reminds me of the Kartika woman who was caught drinking beer in a hotel lobby, and consequently earned herself a few strokes of the rattan. Except that that sentence, too, was eventually reduced to a prescribed duration of “community service”, whatever that means.

So congratulations, Datuk—you’re da man! But let this be a lesson to you; if by any chance you’re planning for no. 3—that seems like a natural progression somehow—make sure you secure the Syariah Court’s consent first, ya hear?

And by the way, here’s to a great Ramadan for you and your family(ies).