A couple of months ago, I posted an article entitled: Letter To Tony. He is, by the way, the CEO of AirAsia. And according to news report, the poor fellow recently fainted due to overwork. Anyway, in that article, I wrote about how infrequently one is able to actually get hot meals onboard the AirAsia flights between KK and KL.
Last week, I took the first flight out from Senai back to KK after the Kiwanis Hunt. The flight was at 7:10am, and I had to wake up at 4:15am that morning. My team mates who were starting early to go back to KL left the hotel a little after 5:00am. Since the Senai Airport was along the way, they were kind enough to send me off.
Anyway, I reached the airport at about 6:20am. After I checked in at the counter, I took the opportunity to sleep on a bench. I was so deprived of sleep those few days. But soon it was time to board the plane.
I had planned to sleep throughout the flight. But shortly after the takeoff, the crews were already busy selling hot meals. I didn't think that I'd have anything left for breakfast, but well, I asked anyway. To my surprise, I was just in time for one of the last 2 packs of nasi lemak. So I bought a packet of nasi lemak and a hot cup of coffee. This was the first time I've managed to taste the elusive nasi lemak on any AirAsia flight. I thought RM14 for the nasi lemak and hot coffee was reasonable. 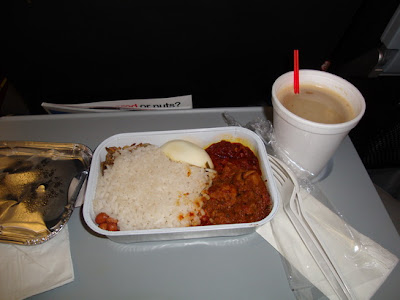 I don't know if it's because I was already hungry then, but the nasi lemak was not bad at all. Apart from the rice which was cooked with coconut cream, there was chicken curry, anchovies, a slice of hard-boiled egg and fried ground nuts.
To the real nasi lemak lovers, the nasi lemak on AirAsia is "incomplete". A more "complete" nasi lemak would typically contain perhaps a combination of beef rendang and chicken and cucumbers. But at any rate, I'm not really used to very big meals for breakfast. I usually have my breakfast at home, which comprises either oat mixed with sweetened milk; or high-fibre cereal with recombined milk. Therefore, I'm OK if the nasi lemak does not come with eggs and cucumber. Besides, now that I know what some people do with cucumbers, every time someone serves me cucumbers, I can't help wondering where those cucumbers come from.
Well, it took me more than 10 times onboard the AirAsia flights, but I finally got to try their nasi lemak. Hopefully, AirAsia can keep it up, so that the next time I fly AirAsia again, who knows, I might get to try the other hot meals on their menu.