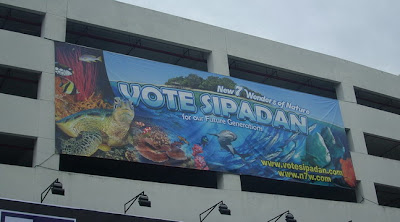 To vote or not to vote, that is the question.
Over the last couple of months, I've lost count of how many forwarded emails and text messages I've received from friends and people I don't even know, appealing me to vote for Sipadan, an island located off the east coast of Sabah, for the title of one of 7 New Wonders of Nature. I haven't voted—not even once—up to now.
It's been widely publicised in the local papers as well as blogs and numerous websites; and not to forget the many, many banners such as the one in the picture above, encouraging Sabahans to vote for Sipadan.
I was talking to a friend recently and was told that he has voted several times in favour of Sipadan. I have the impression that there must be other Sabahans who've voted many times too. But although I would be proud if Sipadan does get the title of Wonder of Nature in the end, I'm not sure if I can accept the way it gets that title.
Is this really the right way to decide if a landmark is really a "Wonder of Nature"? I'm not even aware of the other sites which have been nominated for the title. I remember how disappointed I was when the second Malaysian Idol was announced, because he obviously did not deserve to win. Yet he won because of the voting system.
Well, I shall not vote for Sipadan just because it is located in Sabah. So I must ask all my friends who have been tirelessly forwarding me reminders upon reminders to vote for Sipadan, to please don't waste your efforts. For no amount of reminders will make me vote. If Sipadan does get the title in the end, I shall be happy. But if it doesn't, I won't be disappointed.