The following series of photos speak for themselves (courtesy of Dr Dev Sidhu): 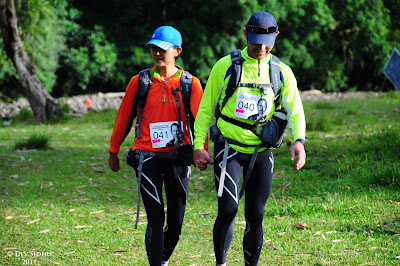 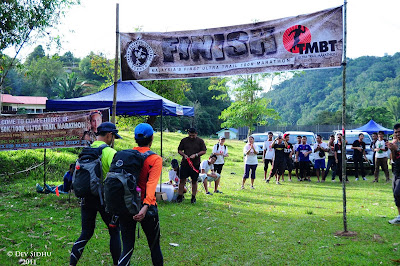 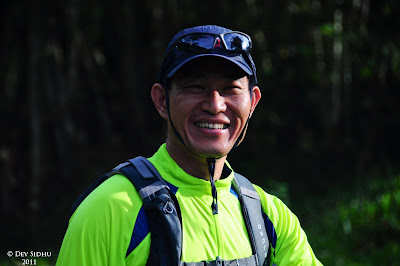 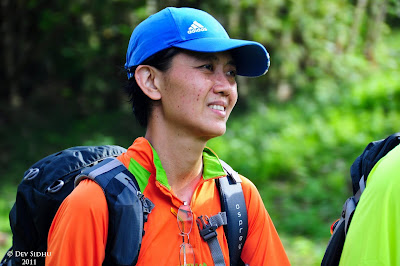 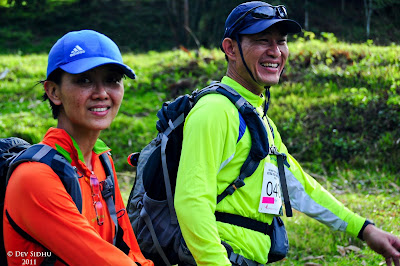 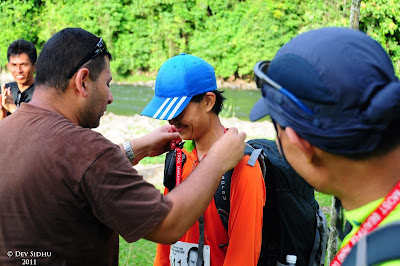 I said at the beginning that I would go for a stroll in the park. Well, it wasn't a stroll in the park at all. Throughout the race, it was very intense—very hard work all the way; so much pain, and so much stress. The race brought out the best in its participants. The Most Beautiful Thing (TMBT) was indeed beautiful and brutal to the very extreme.
I must congratulate Aman and his team for a very good job. I would not hesitate to recommend this event to any adventure addict out there. You just have to experience it to believe it! 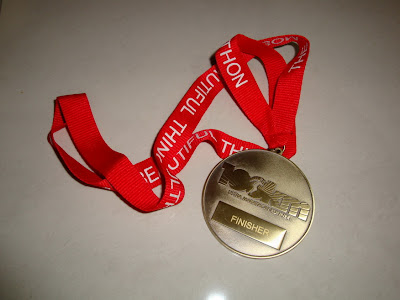 Congrats...that was an amazing journey! wonder if i have the guts to join this next year...

This was what I originally intended second part of my comment:

Congrats. U guys are great! Come to Sg next year and do the TNF 100 solo. That will really be a stroll in the park for u!

Wow..! great report and what a great race. If i have your youth and energy, I'd love to take a crack at it, but alas...it's not going to happen. If are you doing again next year, do it for charity, I'm sure a lot of people would love to see you "suffer" and support you in your cause.LOL.

Hi! Congrats!! Great report man!! Bump into your report when checking out the TMBT. p.s: I think the marshals know about the actual distance but were playing mind game with you guys. :P

To me, beyond the 50km point, a major part of the race was more about mental, as opposed to physical, strength. For if it were about physical strength, Mia and Felice wouldn't have been able to make it all the way to the finish line!

If you have trained hard, especially going up and down plenty of hills, there is no reason why you should not have the guts to join TMBT. You are not gonna know if you have it in you to complete the race; there in only one way to find out!

Thanks for your kind words. It's not always that I could get the opportunity to do this kinda thing together with Mia; and I wanted to make it special. And indeed it was special. Yes, you are right, it was the most beautiful thing. I wouldn't have it any other way!

I'm not sure about the 100k TNF being a stroll in the park for me, but I will keep the option open for now. Still too early to decide. Obviously right now my legs are saying no more of this nonsense, please! haha!

It's still too soon to commit to TMBT 2012. I'm still seeing many, many hills when I go to sleep. It was a traumatic experience, but even if it's brutal, I wouldn't have it any other way.

Apparently, TMBT 2012 would retain only 50%-70% of this year's route. I have no idea if the new route would be easier, or harder, or similar as this year's. But the time limit will be reduced by a few hours. All this sounds like very exciting, and I'm already itching to know more!

I think I can agree with you about the marshals "playing mind game" with us. But in this particular case, I did not (and still do not) appreciate it. I think it is very unprofessional for a Race Director to deliberately give false information to a participant on whatever grounds. In fact, I think he owed it to us to give accurate information.

I signed up for this race, wanting to finish it; and have toiled more than 24 hours without sleep and proper rest and meals. I was determined to finish the race if I had to crawl to the finish line. In the dying hours and minutes of the race, information such as how much further to go was very important to strategise my pace. His information was crucial to my plan; he could have caused me to fail!

I have since received a number of interesting questions from friends via text messages and emails, apart from congratulatory messages. I want to share some of the more popular ones here:

1) Yes, I'm fairly certain that Mia's bag was the heaviest in the entire crowd that day. I think it was a little over 8kg; whereas mine was just slightly lesser than that. It took us till almost midnight the night before the race to finish packing, resulting in only 3 hours of very light sleep.

2) No, there was not a moment during the race when we behaved like any of those bickerings seen in The Amazing Race. That's one mistake we would not allow ourselves to make. Up till now I still can't understand why those people on The Amazing Race keep repeating the same mistake over and over again, season after season.

3) No, the blisters in my groin was not mainly caused by my wading the river, although that was part of it. Even if I did not have to get into the water, the intensity of the workout would have resulted in my underwear and tights getting soaked in sweat anyway, and it was then just a matter of time for the chaffing to happen. The main reason was that in the rush on the morning of the event, I was unable to find my vaselin cream. So I did not apply any at all. Vaselin cream would have at least delayed the onset of blisters.

4) Yes, both ponstan and celebrex were effective to numb the pain. But if it were not a race, I would have stopped when I felt any pain resulting from sprains. Those drugs can only help to numb the pain, but not really cure it. Forcing on a sprain foot may lead to prolonged or permanent injury, so it's not always a good idea to use drugs when in danger of injury. The best thing to do is still to stop the activity. But since this was a race, I did not want to surrender so easily; it's foolish, I know. But as I said to Felice a few times, I am allergic to failure.

I really love the last part of your report. Is so so romantic! Thanks for sharing your wonderful experience!

Thank you for your kind words, Henry. If you are also into endurance races, you should make it a point to try TMBT. Next one will be held on the 15th September 2012.

I just read all three parts of your TMBT race.. AMAZING!

thanks for sharing....it was indeed a beautiful experience, especially accomplishing it with your loved one. congrats once again for Mia and your achievements!
are you participating in this year challenge again? if yes, see you there... :D

Thanks for your kind words, eemee. Yes, both Mia and I will be participating in the 100km category again this year. But this time she will be having her own group of runners; and I will have my own group!

Hi Cornelius! Regarding your questions for me in FB.. yes, I'd attempted a FM previously, only once in Sundown 2010. I normally do HMs. I am not a hardcore runner/athlete, but doing all these for personal satisfaction, aiming to finish/complete the race - a race against myself. Shamefully, I have to admit, I hardly train - which is bad (guilty as charged), and typically, I'll manage only 7km/hr (Adui!).

Having run the full marathon is no guarantee that one will be able to finish the 100km ultra trail marathon. So don't worry too much about it. These events are two very different races. A friend of mine, Jonas, has never run a full marathon before. He, too, has only done half marathons. But he runs the ultra trail much faster than I do!

The reason I asked you if you've run the full marathon before was because I was trying to estimate your finishing time, you see. This was because you raised the question about headlamps. I was thinking that if you're a fast runner, it's quite possible to finish the 50km within 9-10 hours, and therefore headlamps are not an issue. The 50km gradient this year is not so punishing, so I won't be surprised if many people can finish it in under 10hrs.

However, since you said your usual pace is 7min/km, then I would estimate your finishing time to be about 11-12hours. Meaning the likelihood of nightfall towards the tail end of your race. Therefore choosing a proper headlamp will become important. I'd reckon you will be experiencing "night racing" for about 1-2 hours.

Thanks for your tips Cornelius!!
I'm keeping my fingers crossed. Hoping to finish within the cut-off time, safe and sound in one whole piece. :D