I have conquered several marathons and shorter running events in the region; and I have recently conquered a sprint triathlon in Miri. In all of those events, I was racing to finish them in the best possible time. Simply finishing a 42km marathon within the time limit is no longer a challenge to me—it has never been—as I have no ambition to attempt the Boston Marathon.
When I registered for Sabah Adventure Challenge: The Most Beautiful Thing (TMBT), a 100km ultra trail marathon event, I had a change of attitude. It was a distance far beyond anything I've done before. From the very beginning, I made up my mind to enter the race with the aim of finishing it; not for speed. Still, the 36-hour official time limit seemed very generous. I brought along a camera, planning to savour the beauty of the Sabah countryside. I was planning to enjoy the "stroll in the park" with plenty of rests in between.
Mia had also decided to join me in this outing; and although at first I tried to talk her out of it (I suggested that she should attempt the 50km category instead) I was secretly pleased when she insisted to try the 100km anyway. Our friend, Dr Felice Huang, who was at first doubtful that she could finish the 100km, was inspired by Mia, and then decided to take up the challenge too. Throughout the months prior to the event, too many people were trying to talk them out of the 100km category. But I kept on encouraging them both.
Apart from the challenge in the distance, Mia and Felice were very worried about the inevitable night trekking. At first, it seemed possible to try to race during the day; then sleep during the night; and finally race again to the finish line on the second day within the 36-hour allocated time. But it soon became obvious that that's impossible to achieve—running or trekking at night was totally inevitable.
The 100km was divided into several portions, and participants had to check in at numerous pit stops or checkpoints referred to as CP1, CP2, CP3, CP3A, CP4, CP5 (finish line for 25km/50km categories), CP6, CP6A, CP7, CP8, CP9, CP10, finish line. Of those checkpoints, there was a cut off time at CP3 (8 hours from flag off); and CP8 (24 hours from flag off).
We found ourselves at the starting line of the race near a bridge, some 9km south of Kota Belud town. A beautiful sunny morning, and we were treated with a clear view of the majestic Mount Kinabalu from the bridge. 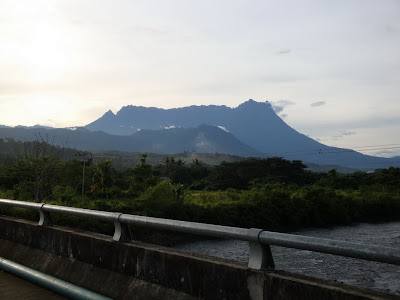 There were many familiar faces at the starting line. Claire and Lawrence were there, and you won't be surprised, of course, that Claire beat Lawrence in their 50km category because she had the unfair advantage of extremely long and sexy pair of legs. 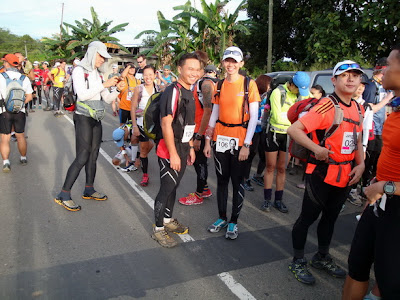 It wasn't a very big crowd, but I think it was a correct decision by the organiser to limit the size of participation, since the race route brought us to some eco-sensitive areas in the hills. 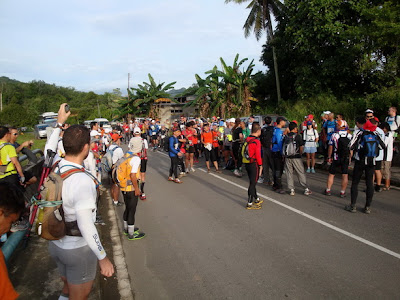 Mia and Felice walked together for the most part of the earlier portion of the race. From a perfect asphalt road, it very quickly broke off to a gravel road and some crude concrete driveways. But some portions were of loose gravels. 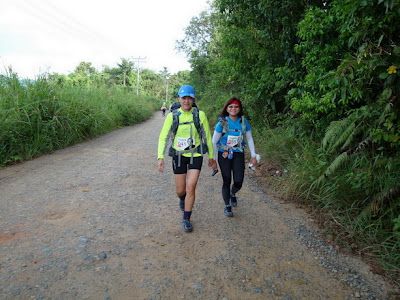 I told them that I'd go a little faster and wait for them at CP5, and then tackle the night trekking part together with them beyond that point. I did not know the ridiculous rolling hills, rivers, narrow paths along cliffs that we had to pass before reaching CP5. I had estimated that Mia and Felice would reach CP5 at 3pm at the latest. Oh boy, I was in for a big surprise!
As I continued down the endless road, labouring my way up and down countless hills, it soon dawned on me that to reach CP5 by 3pm was not only impossible for Mia and Felice, but I seriously doubted that even I could make it there by 5pm!
Along the way, Jiki and Judy overtook me. And I also noticed that Jack was up ahead. Several more familiar faces from the numerous trekking outings up to Terian were also there; and one by one they overtook me. It was quite a challenge to suppress my inclination to run ahead. But I had to stick to my gameplan—I had to save some energy for the second 50km of the race; whereas they were only running a 50km race. 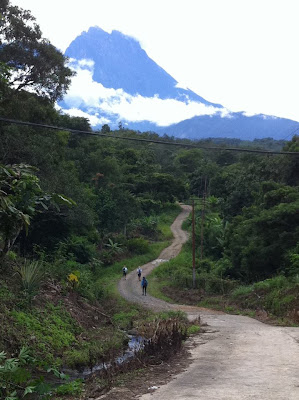 Well, I passed CP1 and CP2 within 3 hours, and I was quite happy to continue to CP3 when I accidentally stepped onto a loose gravel on the road and twisted my right foot. Immediately, I could feel a sharp pain. I paused for a brief moment and tested my weight on my foot. It was painful, but still bearable. Thus I continued my way to CP3, but reducing my pace just as a precautionary measure.
Many more hills later, I finally arrived at CP3 and was pleasantly surprised to find a grand welcome by the villagers, with gongs (unfortunately beating out of tune). I duly signed the check-in list and proceeded to get some water. 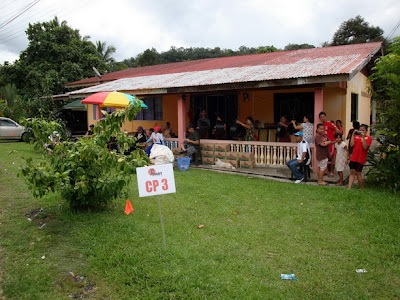 There, I noticed Tan Yoke Lee, a friend devoid of any muscle in her body. She had arrived at CP3 a couple of minutes before me. She was making final checks of her bag before continuing her journey. 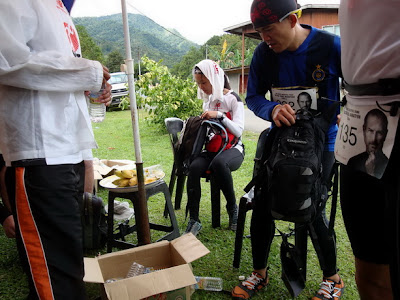 Claire and Annie were also there for an early lunch. Claire looked a bit tired, though I still think her extremely long sexy legs were an unfair advantage (Damn! Just look at those legs!). 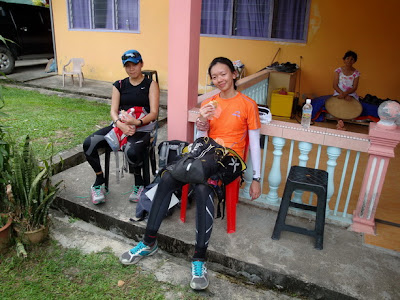 I grabbed some bananas, topped up my water bottles, and decided to sit for a bit on a plastic stool. And then the inevitable happened. Only a few minutes off my feet, and when I tried to stand up again, I could feel the pain on my right foot. The loose gravel had caused a bigger damage than I had initially thought. I tested my weight on it by walking around for a bit, but it was still throbbing. At that point, it seemed certain that I was not destined to even reach CP5. Luckily there was a medic team at CP3, and I managed to get a deep heat cream to numb the pain.
Looking at my watch, it was clear that Mia and Felice would not reach CP5 before nightfall, let alone 5pm. So I decided to wait for them at CP3 while at the same time hoping that I could rest my foot. A little over half an hour later, I was pleased to see Mia arriving at CP3. 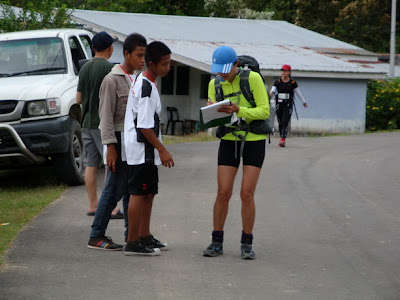 But we had to wait a little longer before Felice turned up from the hills; her head bobbing up and down from afar. She seemed to be doing fine, and immediately after signing the check-in list, was obliged to dance a bit of Sumazau to the tune of the gongs. 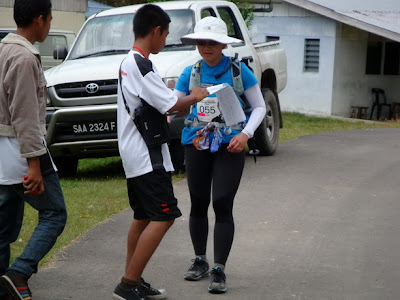 But things were looking bleak for me. I did not have much hope for my right foot. It was throbbing still, although I could still walk. In accordance to our plan, we would break for lunch in CP3A, not at CP3. So after a very short rest for Mia and Felice, we decided to push on. As Mia and Felice walked down the hill, I was limping about 30 metres behind them. I had ponstan with me, but Felice said she had better, i.e. Celebrex. However, it's advisable to take Celebrex after a meal. Since lunch was not scheduled up till CP3A, I had to endure the distance up to that point before consuming the drug.
But the journey to CP3A wasn't as easy as one would expect. We had to pass several hanging bridges, scale steep hills, pass abandoned dirt roads, and wade through an icy-cold river. But wading through the river was a blessing in disguise after all. Coupled with the deep heat cream I had applied earlier, the icy-cold water soothed my nerves; and I emerged on the other side feeling much better! Putting on my shoes again, I braved the steep hill ahead, Mia and Felice not very far behind, until we came to a river. 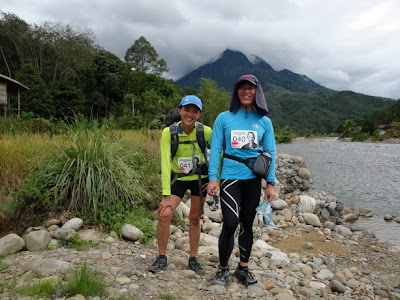 A very brief stop for a photo before we continued along the river bank, finally arriving at a hanging bridge. 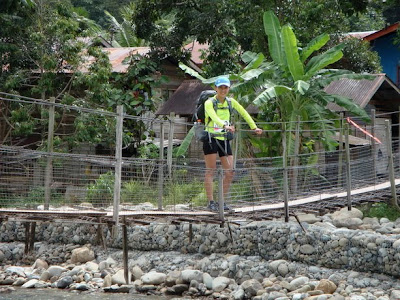 Felice was still doing great as she made the crossing into CP3A. 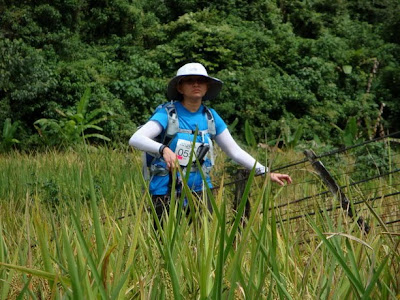 Cornelius - beautiful. I wished i signed up and was there. See you in the second 50km of the race report. :)

First of all, congratulations for finishing the 100km trail race. I always believe you can do it.

Although still got second part of the report yet to come, it already made me feel the many 42km marathons I've joined look like child's play! :)

Thank you guys! It was a very humbling experience, but it was absolutely brilliant! If you're an adventure challenge freak, you simply must have the TMBT medal in your collection!

Well written, but please stop harassing my legs in your blog -_-

Haha! Claire, can't help it, your legs stood out from the rest bah! By the way, congratulations for conquering the 50km; and you finished before me too!