A Week Dominated By Apes & Shooting

SEVERAL weeks ago, I found myself at Centrepoint one weekend for no apparent reason. I think I went for my long run first thing that morning, and then decided to walk for a bit to relax my legs. I ended up at the Growball cinema on the 8th floor. I did not plan to watch a movie, but I eventually decided to watch Rise of The Planet of the Apes anyway. I know the title of the movie may give you the wrong impression of what it's all about, but let me hasten to assure you that it wasn't a documentary about our politicians.
I would have brought JJ along to watch the movie, but she was then preparing for her exams, and mommy just wouldn't allow it; not even on a weekend.
Earlier this week, I was in Wisma Merdeka during lunch break when I saw the video CD of the same movie. I decided that it would be a nice movie to buy. JJ could watch it at home now that her exams are over. As I had expected, JJ liked the movie. She was intrigued by all the apes, and she asked me if those were real apes trained by humans. I explained to her that those were in fact not real apes; that those were actually the results of computer-generated images based on impressions of human actors. The main character in the movie was an ape named Caesar which was modelled by an actor named Andy Serkis.
When you come to think of it, it's quite amazing that a man who looks like this... 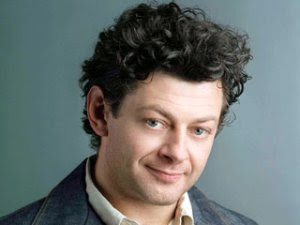 can somehow be transformed into something that looks like this... 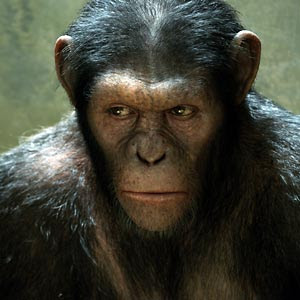 But that just goes to show how far the technology in movie-making had progressed over the last few decades.
Also within this week, we have had quite some excitement in the front pages of our local papers, concerning two politicians who've long ago passed their heydays, but refused to fade gracefully into retirement. Instead, they're still fighting very hard to remain relevant today. So they are reduced to pointing fingers at each other—both trying to say the other made mistakes to the detriment of the people of Sabah.
On the left-hand corner, we have Tan Sri Datuk Harris Salleh. 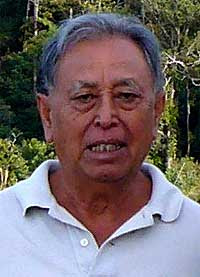 And on the right-hand corner, we have Datuk Seri Yong Teck Lee. 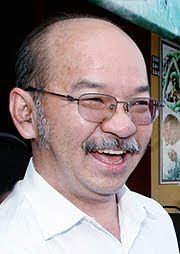 And just in case you're wondering—no, the above pictures have not gone through the same computer modification thing to make them look like apes, even if that seems to be the case here. I swear, that's how they really look like in person!
In the heat of the debate, apparently Yong offered to shoot himself if he's found to have committed any criminal wrongdoings. I think that would have been such a waste. I'm guessing maybe there are people who're willing to pay a lot of money to have the fun of pulling the trigger on him. I mean, why waste it? Why not turn it into a fund-raising affair; if Yong deems it fit to shoot himself, he might as well let someone else pull the trigger for cash, and then donate the money to charities. That would be an awesome, albeit dramatic, means of doing something good for the people.
After all, it won't be the first time a man is shot because he's mistaken for a monkey?

When the buying stops, the selling would die off.

"When the buying stops, the selling would die off"

There is a lot of truth in the above sentence, and I shall not attempt to dispute it! I have seen something similar before in the context of other activities such as drug abuse, prostitution, and tiger body parts trades.

I'm not a perfect man, and I've never claimed myself to be one. I'm for the most part a law-abiding citizen, and I try to stay out of trouble.

I don't think I will ever pay for ivories or illegal drugs or prostitution, for the simple reason that I think paying for those can cause serious harm to others.

I'm convinced that buying cheap DVDs would cause loss of incomes to film-makers, but I doubt that they would become dirt poor because of it. I suppose for some films, e.g. Toyol, the audience is relatively much smaller, and when the number of people buying fake DVDs increases, maybe that can harm the film-makers substantially. So I would consider seriously before buying fake Toyol DVDs, not that I have any intention to watch silly movies like those anytime soon.

This is not an excuse for my buying fake DVDs; as I said, it is true that "When the buying stops, the selling would die off". To repeat, I am not perfect.