Recently, Andrew Voon and some of my runner friends went to Australia for the Gold Coast Airport Marathon. On the whole, it was a fruitful trip for them, with a couple of personal bests achieved. Unfortunately, Dr Peter and I were unable to make it for this race.
Last night, Andrew and Carol organised a post-marathon get-together dinner at his lovely home, and both Dr Peter and I were invited to join although we were not there in Gold Coast. It was originally meant to be a simple potluck dinner, but it eventually turned out to be a lavish and glorious dinner! We had inter alia plenty of satay, crabs (in two types of recipes), and I brought some sweet-and-sour prawns. I seized the opportunity to impose upon Dr Peter the long-delayed lobster he owed me from the Borneo International Marathon in May.
Unfortunately, Dr Helen was unable to make it; as were Teo, Dr Liaw and Kevin. Dr Felice was also at risk of not having been able to make it since she fell ill that afternoon with suspected food poisoning. But she recovered in good time for the dinner, tagging along her two kids. Jack and Judy were the first of the guests to arrive.
Dr Peter was the last to arrive, having lost his way to Radiant Court. He called me up to ask for direction, and I had quite a hard time guiding him to the Condo wherein Andrew lives. I think someone in the authority should consider kicking Dr Peter out of Sabah, because he appeared not to know very much about Kota Kinabalu City. He did not even know where the Bird Sanctuary in Likas is. But in the end Dr Peter made a grand entrance with a loaf of glorious home-made bread in one hand, and the lobster in the other hand.

A close-up shot of the long-awaited lobster: 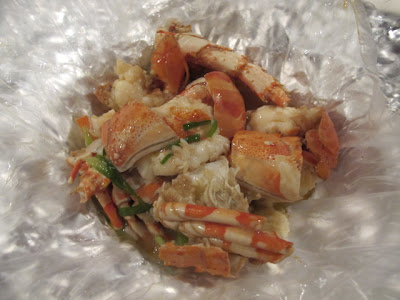 Before dinner started, we had the proper ritual of the loser delivering the lobster to the winner—and it was done with so much drama! 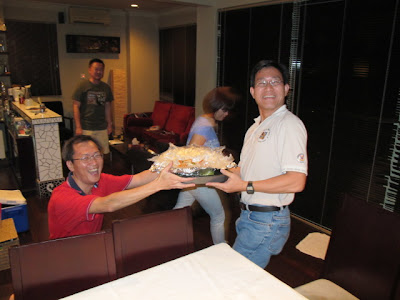 And if that's not dramatic enough, the loser even went on to actually feed the first piece of the lobster to the winner! It wasn't very easy to prepare for that historical pose, you know! 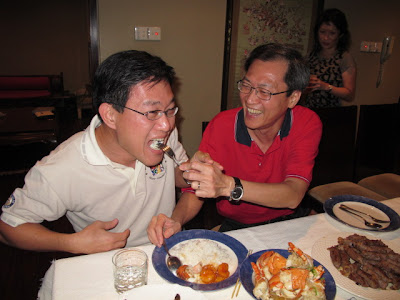 The dinner was quite timely, as Dr Peter and I had planned to run a half marathon training the following morning, i.e. this morning. So all those excess calories could come in useful. But it wasn't exactly my idea of carbo-loading, because, truth be told, we had very little carbohydrates from all those dishes. Instead, we had plenty of cholesterol-filled food and fats, fats, and more fats! 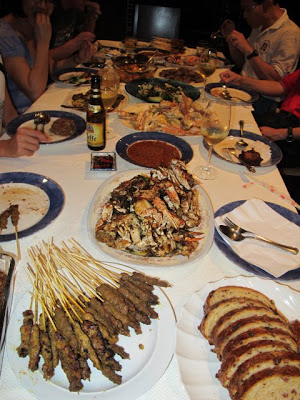 It was a small group with plenty of food, but in the end I'd say we performed quite well. We finished almost all of the food on the table. 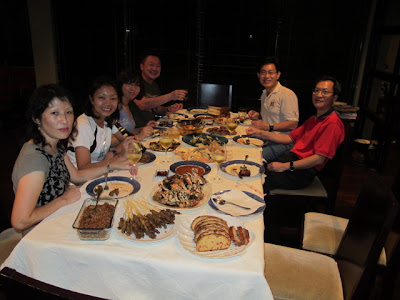 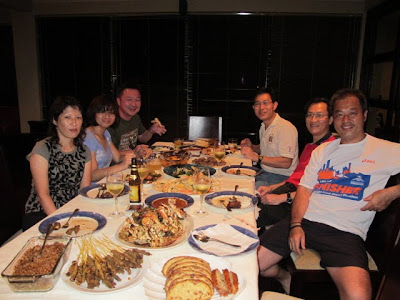 We covered quite a lot of topics at the table—from stem cell technology, people getting stuck while having intercourse (I didn't know that that can also happen to humans). By the way, Dr Felice announced her plan to specialise in the field of sex, with the intention of becoming a sex therapist one of these days. And coincidentally, this morning I read with interest this news article. So it seems that Felice's expertise has the potential of becoming very sought-after!
And of course we talked about the Gold Coast Marathon. These fellows are now entertaining the idea of doing Melbourne next year, I think some time in October. I will try to make it this time. And to make it even more interesting, I will also try to drag Dr Peter along. It won't be fun without him!
Oh! by the way, Dr Felice was the most-improved marathoner amongst our group in Gold Coast. She improved by almost an hour, finishing in a respectable 5:02, compared to about 5:53 in the Borneo International Marathon.
Well, I had to excuse myself a few minutes before 10pm, as I had to wake up at 4am this morning for the 21km. That, by the way, turned out to be a pleasant run, except that I had to run solo most of the time, as Dr Peter started about 20 minutes later than me.
I dread the thought of Penang, because knowing Dr Peter, he's gonna make sure he's gonna beat me this time! So in the mean time, between now and November, I am going to savour the glory of my BIM's victory. Come November, I have the feeling that I will be the one on my knees serving Dr Peter the lobster!

Melbourne's St. George's Marathon falls on a very auspicious date this year i.e 10.10.10, I'm thinking of going for holiday there and round it up with a 10k run. Looking for kaki to share expenses, interested ?

Ah! Unfortunately, I've already committed to do the Newton 30km on that day in Singapore. And since I'll be arriving in Singapore 2 days before that, I'm also keen to see the North Face race. That race sounds scary, a team event of a total 100km. Apparently, only a few of the best of the best will be eligible to join.