During one of my yam cha sessions with a friend recently, we talked about the interesting rivalry between Michael Phelps and Milorad Cavic. I used to swim a lot when I was younger, but I'm not well-versed with swimming from the technical point of view. I swam without caring much about the techniques. I did it mostly for the exercise. But to these guys, because swimming is their bread and butter, they have no choice but to know every single thing about the sport—training techniques, diets, and even their swimming outfits were invented by very clever people. A lot of time and efforts, coupled with money and scientific knowledge went into those suits. I'm guessing that those suits can probably make very minor differences—perhaps in the order of fractions of a second. 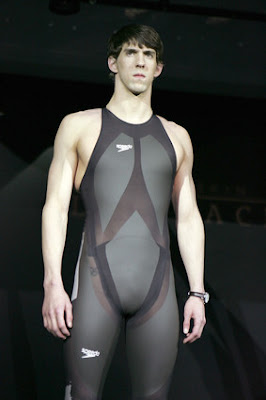 And this is Phelps in the famous suit. Something which appears so simple and like any other ordinary suit, but in actual fact it can add to the performance of the swimmer. 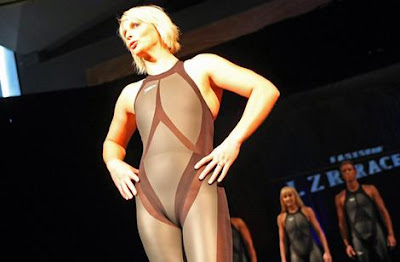 Another amazing view of the super suit—not only because the person in it has absolutely flat chest—but rather because this woman also became the champion in her discipline.
Truly, there must be something special in the swimming suits, especially when worn by world class swimmers. I suppose if I were to put these suits on, they wouldn't make any difference at all, except maybe I would feel a little uncomfortable in the groin area? 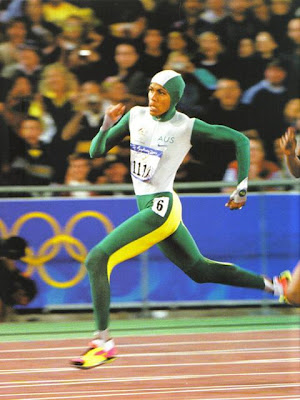 In the track and field events, we have also seen how some athletes have tried to improve their performances by having specially made outfits. The above is the famous Cathy Freeman who won the 400m title at the 2000 Olympics in Sydney. Apparently, the outfit was the result of wanting the runner to take advantage of the aerodynamic effect. But I don't know how much the outfit actually helped her to achieve the gold medal. 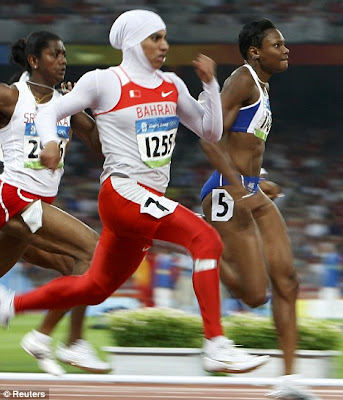 More recently, we had Roqaya Al-Gassra of Bahrain who also ran fully covered from head to toe, except for the face and hands. But interestingly she had a different reason for the outfit. In her case, she did it mainly because of hijab. And hijab is an issue which even the Muslims can't really agree among themselves what it is, exactly. As a matter of fact, I have spoken to a number of my Muslim friends about the subject, and I'm amazed at the many variations of what hijab is!
There is the explanation that hijab is nothing more than custom and tradition. Women cover up their hair because of custom. It has no religious significance whatsoever.
But then there is also the more popular explanation that hijab is related to religious requirement. And here, I find it's getting very interesting. I was given to understand (although I may have understood wrongly) that Muslim women cover their hair on grounds of modesty, privacy and morality. Some Muslim women also take this principle a little further—they don't just cover their hair, but also the entire face. A muslim friend explained—and this is the shocking thing—that the idea is to prevent men from having "unhealthy" thoughts when looking at pretty women. He may develop immoral thoughts too! He may even become sexually aroused when seeing beautiful women! In that sense, these women can be construed as "exposing" themselves indecently!
I'm fairly sure that is not the fully-correct explanation to the hijab thing. And I don't know why exactly is Roqaya running in that outfit. But if it's anything to do with preventing men from having "unhealthy thoughts", perhaps someone should tell Roqaya that many men may have "unhealthy thoughts" when looking at women in skin-tight outfits. In fact, I think the effect is much greater when compared to just looking at the exposed hair. Then again, of course they are those in the minority group who are greatly affected by beautiful hair too.