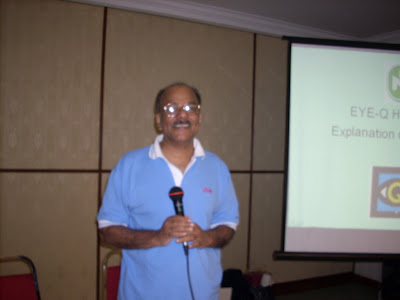 It was 5:30am when the alarm on my handphone went off. I struggled out of bed. Vincent had just finished freshening up. "Just nice," he said, referring to the timing. I rarely wake up at such ungodly hours in the morning, but we had a big mission—it's the Eye-Q Hunt 2008.

A few minutes later, we were already having breakfast (we made a special arrangement for the early breakfast with the hotel staff the night before). After breakfast, we set out to the flag-off station. But on the way there, we made a wrong turn and had to double back. When we arrived at the flag-off point, Jay, the CoC was already there. Sadly, the response for the hunt was very poor; which was quite a shame, because it's this kind of hunts that's ideal for learning. Just for the record, I did not faint during the hunt!

There were 30 route questions and 5 treasures to solve within 5.5 hours. Of the 30 route questions, at least 27 were the so-called "bolded questions". Not a very tough hunt if one was like Neo of The Matrix who's downloaded the entire volume of the Encyclopaedia into his brain. Of course if you are not Neo, then this hunt is the mother of all hunts!

I have a shrewd suspicion that Jay had the sadistic mind to teach us all a good lesson. And indeed we had a good lesson!

It's amusing to note that the tulip comprised only a single page from start to finish. There was hardly any "recovery period" between those questions. And bear in mind that all of the questions were tough. No—they were almost impossibly tough!

We struggled with practically each and every question from start to finish. And because of the small lanes in the questions sectors, we had to hunt on foot in many of those sectors. Let me tell you that the burning hot sun was not amusing at all.

Generally, I found the hunt, apart from being tough because of the many levels of cryptic complications, was more of a test of specific and rare knowledge, as opposed to the general knowledge. It's the kind of questions that I would not set in a motorised hunt.

My idea of good hunt questions are those which require general knowledge—I mean general enough for the majority to know. Nothing is more satisfying to me as a CoC if I can conjure up questions where the "raw materials" required to arrive at the answers are basic and simple. I liken it to the thrill of being a matador—I will invite the bull to charge, and when it does, I will let it come very, very close to my body, but not quite touching me! When I reveal the answers to my questions, I want my audience to be in awe because of realising how close they were to the answers—that they were achievable. I want them to say to themselves, "Oh if I had only remembered that so and so, I'd have solved it!" I would be sad if they ended up in awe because they had no idea what's a mobius; or that "a sex appeal" refers to "it"; or "very little" means "no".
I suppose it boils down to the respective "styles" of the many CoCs. It was a good learning experience all the same, and if I can make it, I will certainly come back to redeem my badly injured pride (smile). We ended up in fourth position, but I will try to improve on it if I can have the opportunity to do the Eye-Q again in the future. Bring it on!
But my readers will not forgive me if I refrained from commenting and analysing the questions of this hunt. So I am left with no choice but to please my fans. I must say that it is not very easy to find any holes in Jay's questions—they're of very high quality, and some were very cleverly set too.
I am so tired and am struggling to keep my eyes open right now. I will close this here, and will continue with my comments on the questions tomorrow.
Posted by Cornelius at 9:36:00 PM