It's been about a month since I ran the Standard Chartered Singapore Marathon. Immediately after that race, I was determined to take a long break from running as my knee was aching badly. However, my knee healed surprisingly fast and I have since started running again towards the end of December.
This year I plan to find ways to improve on my pace, and hopefully will eventually be able to improve on my personal best time in the full marathon. I've done a bit of research from several sources and decided to invest in a heart rate monitor (HRM) watch. Unfortunately, the one I'm interested in is not available here in KK. Considering that it's such an expensive device, I'd like to actually try it on my wrist before purchasing it. Which means I have to fly to KL to buy it!
Nevertheless, it seems like such a waste to make the trip to KL strictly to buy a watch! So I tried to find other things I could do while I'm in KL, apart from watching Avatar in 3D. In the end, I found the perfect solution. The New Balance 30K race, organised by Pacesetters, is scheduled for 17 January. Well, I'm not really confident of doing very well in this race, especially since there are plenty of slopes throughout the route—and I just hate slopes—but I figured if I could just finish within the time limit of 3:45, I'd get a finisher medal. So to make the long story short, my friend, KK Chai helped me to register for this event.
About 2 weeks ago, while I was running a 20km long run at the Likas track, I bumped into Dr Joseph. We ran together for a couple of laps. He was telling me about taking supplements, and then we got to talk about spirulina. According to him, taking spirulina has helped him. Incidentally, Mia, too, has been taking spirulina for a while now.
Over dinner that night, I sort of mentioned to Mia about my conversation with Dr Joseph. And then Mia said that she just bought a new bottle of spirulina from her colleague. In fact, she bought a "big" bottle containing 1200 spirulina tablets! She said we could share that bottle and if it works for me, then I can order one for myself. I exclaimed that 1200 is a hell lot of spirulina and would probably take ages to finish! Check out the bottle below. 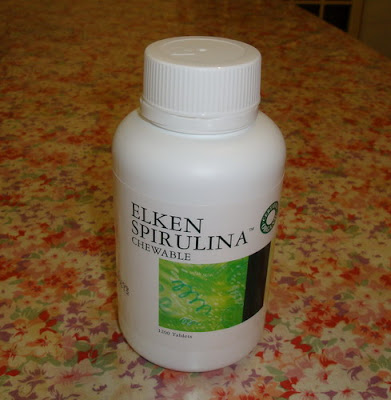 And this is the enlarged view near the bottom of the bottle, i.e. showing the number of tablets.

Now I think most of you would already know that these products by direct-selling companies in Malaysia are always at least 30% more expensive—if not more—than those similar ones in the shops. But of course they are said to be more expensive because they are of higher quality. I have no idea of the truth of such claim.
But anyway, I thought since a doctor recommended spirulina to me, there's no harm to try it. I took the bottle and read the instructions at the back. It stated 5 to 10 tablets three times daily (before meals). Now assuming that I'm looking at the minimum side of that range, it's still a total of 15 tablets per day. And if looking at the higher end of that range, I would be taking up to 30 tablets per day—freakin' 30 tablets per day, can you believe that? It means that if I were to adopt the maximum dosage, I would be finishing the whole bottle in only 40 days!
I find it annoying that these direct-selling companies are using this kind of cheap gimmicks in their products. When they sell, they always divide the price by the number of tablets in the bottle, so that the price per tablet appears to be low. But one would have to take so many tablets at any one time. If any of you readers are from amongst the decision makers in the direct-selling companies, please do something about it. If your products work for me, I don't mind paying for them. But please, I prefer to take only ONE tablet at a time, i.e. 3 tablets per day is not too bad, not the pathetic 30 tablets!
Oh by the way, Dr Peter went to Taiwan recently and bought some kind of turtle soup and ling-tze which are supposed to enhance his energy. I forgot to ask him whether he's referring to energy for running or for other domestic purposes in the bedroom. But that is not all; he also bought a new pair of Nike Lunarglide. Apparently, he tried running a 15km in them and he said he did it effortlessly! Damn! now that's cheating—I have to run, and all he has to do is glide?
This evening, when I arrived at the track for my pace run, Dr Peter was already done with his run. I saw the striking Lunarglide on his feet and thought I simply had to say something. So I told him that I'm flying to KL to buy the Polar HRM watch so that I can train to beat him, glide or no glide! Now perhaps I need to look for a hare soup to go with the Polar watch. You just watch out Dr Peter!

The watch shop at Wawasan Plaza Gr floor has a timex HRM watch..used that last year...of course Polar is much better, more functions and all...but if you want something functional and save some money at the same time (perhaps for that lunar glide)...check it out

Your blog keeps getting better and better! Your older articles are not as good as newer ones you have a lot more creativity and originality now keep it up!

Now you have virtually FORCED me to get a HRM watch plus the Nike Lunar Glide....something to pampered myself ...yeah!! Thanks for the great idea. Goood luck in your 30K run.

A very happy new year to you and your family Corny. Keep up the good blog work :)

I went around KK to look for the HRM, but only found a Casio and Timex; whereas I'm keen on the Polar. Done my research and somehow bent on the Polar. But of course Polar is much more expensive.

Will also buy the LunarGlide, I guess, but since I'm going to KL, I wanna try looking for it there first, just in case it's a bit cheaper. Don't really know whether to buy LunarGlide or New Balance.

Thanks for compliments. Am flattered, but to be quite honest, I can't tell if my posts are getting better or not. Don't feel that I've changed the way I write (or the stuff I write about), but I'll take your word for it!... hehehe

If one were to take this running thing seriously, it's not exactly a cheap hobby after all!

But it's kinda painful to retire my shoes after only 6 - 9 months. Can't do much about it though; once the bottom is word out, that's it. I might eventually buy the LunarGlide too, but I wanna check out New Balance first - see if they have anything better to offer.

Happy New Year to you too, my friend! Will probably be spending lesser time blogging this year though. Am still able to refrain from having a FB of my own. Have heard from too many people that it's addictive!