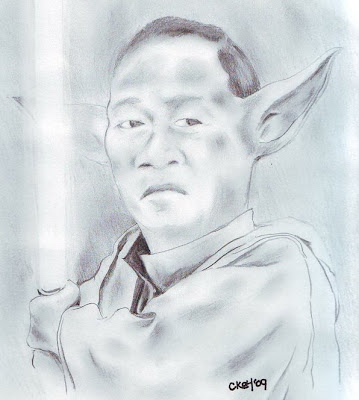 "I AM the force!"
The Kiwanis Treasure Hunt is back again on 30th/31th May, starting from KBU College Bandar Utama, all the way south to Pulai Springs Resort, Johor. As usual, most of the Jedi Knights will be there to fight for glory. Many, many Padawans will be present too.

I was there last year, riding with Jedi Knight Teck Koon and some fellow Padawans. Because of the strong field, Teck Koon seeded our team outside the top 20. But many Jedi teams crashed and burnt along the way—some probably died standing when dealing with the terrifying beings; others got lost in the jungle in pursuit of the elusive bird; others still became blind, watching too many moons and stars. Thus my team made a surprise leap to the 14th position.

This year I will be there again—this time riding with 3 strong Jedi Knights to be reckoned with, but all of whom have never gotten the better of the Kiwanis. Who knows, maybe it can happen this year?

It won’t be smooth sailing though. Apart from Jedi Master Yoda, there will be the Dark Lord of the Sith, Darth Sidious Dom and Count Dooku Lim, whom together had overwhelmed all the Jedi teams in the last two battles.

Master Yoda would say, “Still a lot to learn you have my old Padawan!”

Who will win the battle this time round? Will Yoda be able to stop the force from the dark side? Will the Order of the Jedi be restored once again? Be prepared for the Empire to strike back! All shall be known by the end of this week.

And so, let the fight begin… May the force be with you all!

ERRATUM:I'm afraid I got a bit confused with the events of last year. Master Teck Koon has just informed me that we were actually seeded 17th in last years battle.

Now I know why I remembered wrongly. It was during the presentation night, when the top teams were being announced one by one when Master Teck Koon thought we were unable to break into the top 20. But when we did break into top 20 after all, it was so exciting. From then on, before the announcement of each following (higher) rank, we were convinced that it's gonna be our team next. It didn't happen for a while until we ended up at 14th position. I remember it felt like winning the hunt! Julie and Lee Quan couldn't stop giggling looking at these 2 guys getting all too excited like schoolboys!(smile)