It's been like a hundred years ago since my school days when life revolved around memorizing the periodic table, or math formulas; perhaps coupled with frequent nightmares of my teachers casting a spell on me, thus transforming me into Buku Matematik Gunaan. Oh! those were the days.


I'm not sure what has happened to the language over the last few decades since I left school. Perhaps it went through a kind of modernization process; or maybe there was some sort of mind shift in the way those who consider themselves as experts in the language, but I find the questions that they ask in the exams these days are quite outrageous; and I'm trying my best to be nice here. Consider this question which is found in my daughter's workbook (she is in Primary 4)—click on the photo to get a better view: 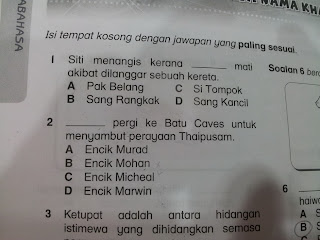 The task is to fill in the blank with the best answer (paling sesuai) from the 4 given choices, A to D. Now, before choosing the answer, one must first understand what the whole thing is about. The question tells the reader that "Siti is crying because ________ died after [it] was knocked down by a car."


What was it that was knocked down by the car? Well, it can be anything at all—it might have been a person or an animal that Siti liked so much. But in this case, it's quite likely that the question is about a pet. The reason that it's most probably a pet is because the available choices for answer are not likely names for people!


While I was thinking about pets in general, I suddenly thought about my friend, Eric. I have of course posted about Eric in the past, although not relating to pets. Eric has a curious inclination whenever it comes to pets. While most people would keep, say, a gold fish as a pet, he would rather keep an ikan toman. Instead of keeping say a cat, he'd keep an iguana as a pet. I dare say he likes exotic pets, you see.


So anyway, it occurred to me that Siti's pet might have been anything ranging from an iguana to a hamster, to a python; hell! even a mouse named Ben. I once had a pet dog named Boomer. A friend of mine had a pet dog too; he named him Nitro. Yet another friend had a pet cat that had stripes, and he named that cat Tiger. Some years ago, my sister, Bridget, had a pet dog which she named Samy Vellu; and another named Rafidah Aziz. But of course admittedly Bridget is weird in her own special way. You see, when it comes to names for pets, it can be almost anything at all. If, for example, my pet is an iguana, maybe I would name it Sang Rangkak, and less likely Pak Belang. But if it's a cat that had stripes on its body like a tiger, then I might name it Pak Belang. On the other hand, if it's a dog or cat that had black spots on its body, then I might name it Si Tompok.


I'm thinking this kind of question is really a no-brainer, and I'm not sure what it's trying to achieve with the students, really. I'm hoping perhaps some of the readers of this blog can suggest a good reason or purpose of this question, please?

Funny question actually, but pretty sure I've encountered a few of these during my days in high school.

In my opinion, I think the purpose of this question is to test the student's logical thinking. Of course, you can say that all the answers available could be correct, but the point is which one is most appropriate.

During my school days, in Malay literature, Pak Belang is always portrayed as a tiger, Sang Rangkak is a lizard(I think), Sang Kancil is a deer, and Si Tompok (Not in literature) is commonly used for a name for cats, as taught by teachers and books time by time. Seeing that a cat would be most appropriate as a pet than lizard, tiger and deer to get hit by a car and died, naturally one would answer Si Tompok as the most suitable answer, though I have to say that this question is not educational in the sense it does not test a student's knowledge/mastery in 'tatabahasa', but rather on common sense and familiarity with unofficial animal names. If your daughter did not know what Si Tompok mostly represents which animal(Assuming she knows that all 4 answers are related to animals), she might have chosen a different answer instead. Not a very good question in educational aspect, in my opinion.

Thanks for your comment, Chung V H, but I must beg to differ.

Which one is most appropriate?

Indeed, which one? We don't even know what or who died to start with. Far from logical thinking, this is no more no less a guessing challenge. It amounts to what women expect of men, i.e. mind reading. The point I'm trying to make here is that why must it be a cat? Why not an iguana? Must the answer be a cat because a cat is more popular than an iguana as a pet, is that what this is all about?

If there is anything I'm hoping to instill in JJ (which is already an uphill task because of the education system), is the art of thinking out of the box. There are almost always more than one way to arrive at a solution, and the correct solution is not necessarily the one found in the text book. Otherwise, she will grow up to have problem answering this question

And which is why this isn't a good question, in educational aspect.

The point I was trying to make is assuming that there are only 4 animals in which your daughter have to choose which one is most appropriate to be a pet of Siti though I won't disagree with you that it is possible that all these 4 animals stated in the question could be hers and a lot of other panimals that could be hers and not necessarily because cats are more popular than the rest or anything(As what I have interpreted from your reply).

I just don't feel that the education system should have questions such as this. Such questions don't really test how knowledgeable a student knows about the language itself, but rather which answer has the highest probability of all the possible answers, which is open up to debate and is not fixed.