The recent episode of an uninvited guest to the “well” as reported here has an effect on Mia. And of course, it has an effect on me too—I don’t think I will ever see my toilet the same way again. You see, we are not big fans of crawly creatures, especially lizards and snakes. It doesn’t help that we’re both paranoid people.

Anyway, Mia is now beginning to wonder if the fact that the back of our house, beyond the fence, which is basically still a “jungle”, had something to do with the recent crawly visitor above. I bet if we were to conduct a thorough search at our backyard, we are bound to find many of those crawlies there! 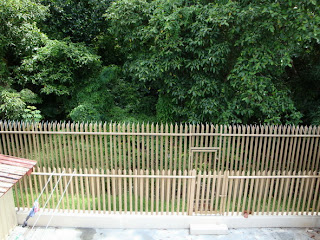 View of the "jungle" outside our rear fence, as seen from a window on the upper floor.

In the end, we decided perhaps it’s time to do something about the “jungle”. If we could just clear the thick undergrowth and trees up to, say, 10ft or 20 ft away from our boundary, maybe that could help a bit?

We came up with an ambitious plan to carry out the project ourselves. Instead of spending our weekends using our energy running or doing other sports, perhaps we can do something more productive like slashing the thick undergrowth in our backyard. As for the bigger and taller trees, we can always borrow a chainsaw from our neighbour. Well, OK, to be honest I don’t know for sure if our neighbour has a chainsaw, but since he appears very Jason-like, I reckon that he should logically have a chainsaw in his collection?

But then after I have cut down the trees and slashed the undergrowth, there is still the problem of removing the debris. I would need help. I don’t think Jason would be keen. And my other neighbour probably has his hands full with his forsaken cats. Besides, even if he’s not, judging from his demeanor—he has a striking resemblance with Angry Bird, you see—I don’t think he’s keen to help too. After all, we would still need a truck to carry the debris away to the dumping ground which is quite far away in Kayu Madang.

In the end, looks like we don’t have a choice but to hire a contractor who has proper tools and manpower for the job. Before moving to this house a little over a year ago, we had also hired a contractor to cut down some trees in our compound. I think it was a mistake not to cut those trees outside our rear fence too then. But we have since lost the contact. I suppose Mia will spend a bit of time to locate where she kept the phone contact of the contractor. She’s extremely good with keeping things; but not so good in remembering where they are when we need them, you see. In that sense, she is very much like the squirrels, y’know. But I have faith in her—I’m confident that she’d find it somehow by the end of this year.

In the mean time, it’s not very amusing having to fix my eyes to the bottom of my toilet every time I’m sitting on it!