I was once a member of the Borneo International Marathon Organising Committee and was mainly responsible on matters relating to the marathon route. I dealt with the ins and outs of measuring the route, distance and direction markers, road barriers, deployments of volunteers etc. In the months leading up to the event itself, we had plenty of brain-storming sessions; meeting upon meeting, not only among the committee members, but also with other relevant parties such as the police, folks from the City Hall etc. Approximately 2 days prior to the event, there was practically no time to sleep. It happened that we were operating on a shoestring budget, and in the dying hours as we approached the flag off, everything was in a havoc. Tension ran high. and it was quite a challenge to remain calm.


Here's the thing about organising a big event such as a marathon—it is almost impossible to control everything. There are so many unforeseen circumstances that can arise, quite often at a moment's notice, and it takes a competent event organiser to rise to the occasion in dealing with the problems.


I can imagine the amount of time and effort involved in organising the Standard Chartered KL Marathon (SCKLM). The flag off was supposed to have been this morning. But last year it made the headlines when it had to be cancelled at the last minute because of the haze situation which has now become an annual phenomenon in Malaysia.


I have run the Standard Chartered KL Marathon before, and I'm not in a big hurry to join it again. Just about a year or two ago, upon my encouragement, my niece, Ramona Jane took up running. I think she started joining 10km runs, and then gradually built up the distance to the half marathon. She's not always able to train properly as she's pursuing a medical degree, so has to give priority to her studies first. She's not a fast runner, I think her best finishing time for the half marathon was just a little over 2:20, but I've been encouraging her to try hard to beat that 2:20 mark.


Fate would have it that she registered for the half marathon in the Standard Chartered KL Marathon today. On Friday afternoon, shortly after lunch hour, she embarked on a journey from Johor to KL to collect her race pack.


Earlier that day, I received a message through Whatsapp from a friend working in Quick-Sport, informing me that there's now a special promotion for the Garmin Forerunner 15, a GPS sports watch, going at RM475 a piece (normal price is over RM700). It's quite a good deal, and knowing that Mona had been wanting to buy a sports watch for a while now, but couldn't afford it, I thought it would be a good surprise for her. Accordingly, I made arrangements with my friend at Quick-Sport for a red-colour Garmin Forerunner 15 for Mona. I then told Mona to meet my friend at the Expo.


Shortly after collecting the watch, I received a message from Mona, "Uncle thank you so much" she said, "You're so nice"


I was glad that she liked the surprise. But then she probably thought that she did not make quite sufficient impression of her appreciation. So she added, "One day when you're old and when you need kidney I'll settle it"


Then, perhaps still not satisfied with herself, she went one step further, "I'm going to be a rheumatologist so when you bust your knees with osteoarthritis I'll be there too", she said.


As you can see, doctors have unorthodox way of expressing their "thank yous"; and they're not big fans of using punctuation marks such as commas and fullstops in the sentences too.


She then went on to collect her race pack; and here's the happy face of a half marathon runner with her race pack and her new GPS watch (still in the box). 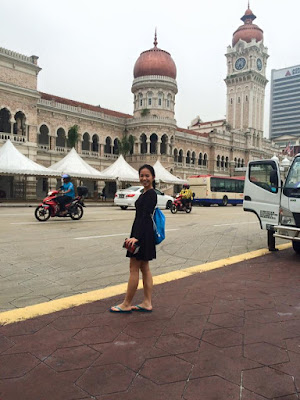 That was Friday evening. And then yesterday, things began to go wrong. The marathon gods brought the haze back to KL with a vengeance. The air quality changed so fast and visibility dropped dramatically. The API readings went from low, to high, to unhealthy levels within hours. The organiser was left with no choice but to announce the cancellation of the race. Mona was devastated, as were thousands and thousands of runners from all over the region. I can just imagine a fully-charged Garmin Forerunner 15, running gears all set to go, but no race to run!


I pity the organiser and the participants alike. But after all, there was nothing more that could be done. Maybe for future SCKLM it would be worth considering to move the event to the rainy months when it's unlikely that the Indonesians would burn their forests then. I say this because I don't believe they will ever stop burning their forests any time soon.


Looking at the bright side, however, I'm thinking maybe the marathon gods are trying to send me a message; maybe they're trying to tell me that my kidneys are safe; that my knees will remain intact for many, many more years to come!