This year I'm planning to run at least 3 full marathons, and several half marathons. Coming out of the festive season, we had a successful trip to Hong Kong in February for the Standard Chartered Hong Kong International Marathon.
After the Hong Kong Marathon, I had originally planned to focus fully on the Borneo International Marathon (BIM) which is on 01 May. Then my friend, Teo, the freak triathlon wannabe, with his amazing credit-cards-promoter skills somehow talked me into signing up for the Bareno Run, a 21km race at Stadium Bukit Jalil.
When I made up my mind to run the Bareno, I had intended it to be just another one of my Sunday long run workouts. After all, I'm running that distance on Sundays whether I'm racing or not. So no pressure on seeking a personal best (PB). These days, even running at a very leisurely pace, I could finish within 2:10. And the time limit for 21km races is usually not less than 2:30. In fact likely to be between 3:00 and 3:30.
That's what I thought then. I did not even bother to read the information in the official website until much later. And I was somewhat surprised to know that only the top 300 finishers in my category would get medals. So obviously I couldn't run too slow. Otherwise, I would come home without a medal. Another thing I found out about the race was that the terrain was gonna be quite hilly. So when I arrived at the starting line yesterday morning at Stadium Bukit Jalil, I wasn't feeling confident at all.
At the sound of the horn, I started out very slowly, perhaps at a pace of 6 mins to 7 mins per km. And of course as usual there were people who mistakenly thought they're running a sprint event. I built up my speed gradually, finally settling at a cruising pace of about 5.5 mins per km by the third km, but all the time conscious of the undulating terrains in front of me. I was, however, pleasantly surprised that though undulating, the ascents and descents were quite gradual.
Having seen an elevation chart from a blog prior to the race, I was expecting a very steep and long climb around the 9th km. So I downed a power gel at more or less the 8th km, a strategy I had hoped could provide at least a small boost up the hills. In hindsight, however, I think that was a bit too late. Perhaps it would have been better if I had taken the power gel even earlier at, say km 6.
True enough, that climb after km9 was so punishing I thought I was gonna develop cramps in my quads. But thankfully I didn't. I ran up that hill slow and steady, which felt like it was never gonna end. As I reached the top of that hill, I smiled to myself triumphantly as I conquered the entire hill without stopping. Then turning a corner a few metres away, I realised that that was not the end of the climb. I was horrified to find yet another long climb. And it was about halfway up this second hill when my legs just couldn't endure the pain. I reduced my pace to a walk and heard my heart pounding in my ears, in spite of the loud music from my walkman.
As any runner would testify, it's not such a good idea to stop running for too long. Only a few seconds at most. Otherwise, the legs would become lazy, and the dreaded cramps would come soon after! So I started running again to the top of the hill. And when that's done with, I was relieved to find a more or less level ground on the other side. I gradually built up my pace to around 5.5 mins per km again.
Shortly later, I reached a long gradual descent of perhaps 2 km or so. I took full advantage of it, building up my pace to about 5 mins per km. At about km14, I saw a 01:22 on my stopwatch. I realised that I was within range for a PB. Although I did not set out to achieve a PB, I decided there and then to give it a shot anyway.
The rest of the route, though still undulating in nature, was fair in terms of more or less equal amounts of ups and downs. I wasn't really paying much attention to the road markers. But when I saw the banner showing 1km to the finish line, the time on my watch was 01:53:45. I increased my pace as much as I could, and upon crossing the finish line, saw a 01:58:40 on my stopwatch. That was a PB for me, as I haven't been able to achieve a sub-2hrs before this. But more importantly, I received a medal immediately after I crossed the finish line.
However, to be quite honest, with the hills throughout the route, I don't believe that I could do a sub-2 hrs. And true enough, from my conversations with some friends after the race, the distance was about 0.5km shy of 21km. Oh well, I guess I will try to run another 21km race some time this year to have another shot at getting a PB for the half marathon. 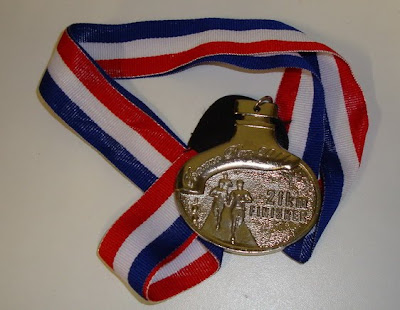 So now full focus on the Borneo International Marathon on 01 May!
Posted by Cornelius at 10:10:00 PM

Allright man! Congratulations. Another PB. Look like a good start for you this year. And I believe you have permanently moved into another level of your running - A higher level.

Thanks, Tekko. Yeah, so far it's been a good start this year. But I think the real test is the BIM on 01 May, because the heat in KK is absolutely brutal!

I kinda like that "A Higher Level" label, but let's not get all too excited yet until after the BIM, hmmm? Still a few weeks to go, and still a lot of work for a good show in the BIM. I'm not gonna be too ambitious; I'm trying for a 04:25 in BIM, since I think that's a more realistic target. It's not gonna be easy though.

My friends have just started the ball rolling on the Sydney Marathon in September. I was given to understand that the temperature there will be comparable with HK when we ran the HK Marathon. So that would be a proper arena for PB hunting. But anyway, it's still too early - it's not even open for registration yet!

In the mean time, Teo, our kipas king, has been pestering everyone within sight to sign up for the Port Dickson Triathlon. He's all excited right now, I suspect he's having sleepless nights just thinking about Port Dickson! He has even purchased air tickets and booked hotel rooms etc. Only trouble is that the event is not even open for registration yet. We have many comedians in our group, you see.