The inaugural Ironman Gurye 2017 was my fourth Ironman, and it was quite an experience like never before for me.


As you can see from the heading of this post, I'm posting the story in two parts: Part 1 will be mainly about The Journey, and related events along the way, to the race venue in Gurye up to the eve of the race; whereas Part 2 will be about the race itself.


I had expected to have some difficulties to communicate with the Koreans, but it was worse than my expectation. Of course Google translate helped to a certain extent, but at times I found that South Korea was even worse than France. They kept speaking Korean to me even though I said I couldn't speak the language. I'm beginning to believe what my friends said to me—that I look a lot like a Korean?


Then the food—oh! Korean food was just awful for my taste buds—I'd say it's safe to estimate perhaps 80% to 90%  of so-called Korean food is hot; like really hot. Chili, chili and more chili. I don't know if the Ironman God up in the heavens had wanted me to hydrate myself well before the race; I drank jugs upon jugs of iced-cold water each time I eat those food. I felt like I was eating dynamites!


Generally, hotel rooms in South Korea provide coffee and tea sachets and tiny cups. And when I said tiny, I really mean tiny. Not to mention the tiny towels which were actually just face towels as far as I'm concerned. Although I did not try to search in the departmental store, I bet it would have been quite a challenge to find a decent bathing towel in South Korea.


I landed at the Incheon International Airport in the morning of the 6th of September, having departed Kota Kinabalu International Airport in the evening of the 5th. I spent the night in a nearby guesthouse named Harumi. I would usually stay in a hotel when I travel overseas, but Harumi was a convenient place which was just about 7km from the airport. I was the only guest at the time, and I was greeted by a tiny furry dog which had some sort of pathetic condition with its voicebox—its barks were almost comical! I spent almost the whole day trying to catch up on my sleep, as I didn't get any sleep throughout the flight from Kuala Lumpur International Airport 2 the night before.


Before nightfall, however, I walked to a nearby shop for an early dinner. I don't even know what I ordered, but of course it was hot; I could almost sense that I was venting steam through my ears. 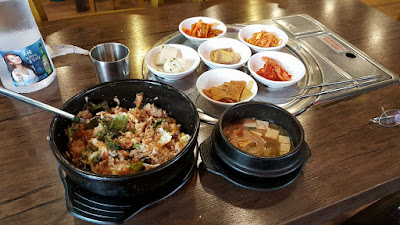 After dinner I stopped at a pharmacy on my way back to Harumi where I picked up a pack of Vaseline lotion for the race. I had wanted to buy Vaseline in KK before the flight. But as Murphy's Law would have it, when I was rushing in the last few hours before my flight, the pharmacy that I went to had run out of Vaseline lotion. The only available lubricant was KY Jelly, but I decided against it. I thought it's not a good idea to provoke too many questions from my wife, if you know what I mean?


The next day, I made my way back to Incheon Airport where I met the rest of my group from Malaysia. I had known Anslem and Amy, of course, but the rest of them were only friends that I've "met" through the Whatsapp chat group that we had created specifically for this trip to Gurye. Quintine and Victor were there at the airport, and I can confirm that they looked like what I had imagined them to be, that is to say not as handsome as me. Their respective spouses were there too. Nick and Wee Wong were there too, and Dr Yap Eng Hui was also there. Kenny Tan, the young lamp post from KL, arrived just shortly before 10am. Apparently he enjoys making a big last-minute entry to add to the thrill of his travel itinerary, you see. 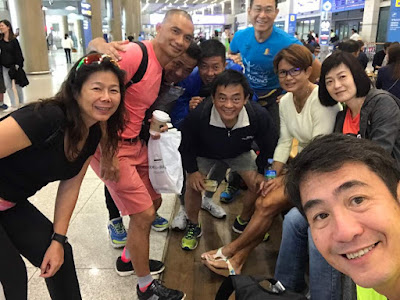 We have all reserved our seats in the 10am shuttle bus to Gurye, but the South Koreans are not generally known to be punctual people. I was at the airport as early as 7:15am, and I took my time having breakfast at KFC. I was the at bus counter way before 10am, but to make the long story short, it was about a quarter to 12pm before we finally embarked on our journey to Gurye. We were travelling together in the same bus, except for Kenny. He was somehow put into an earlier bus, but of course that bus was also delayed.


We finally arrived at our hotel late afternoon. The name of the hotel was S Hotel (not ASS Hotel). Next to that hotel was K Hotel. Kenny was supposed to have reserved a room in K Hotel, but somehow the organizer had messed up with his reservation, and his name was not in the list. When our bus pulled up near S Hotel, Kenny was standing alone at the roadside, looking so pitiful with his bike box and luggage. Eventually he was able to get a room in S Hotel too.


I was still feeling sluggish after the long journey, and I felt like my legs have not fully recovered from the months of training, even though I've had a 2-week taper period. Accordingly, I put on my shoes and went for a very short run. The rest of them decided to assemble their bikes and go to the race venue for athlete's check-in.


As the days got closer and closer to the race, the excitement was mounting. And we had our swim practice session on Friday morning at the lake. We all rode to the lake and put on our wetsuit. It wasn't funny at all. 200m into the swim, I was already gasping for air. I held on to the ropes for a good 5 minutes before making my way back to shore. Everybody was in good spirit though. We met some more friends from Malaysia. Among them was the famous Rupert Chen and his underlings. We took the opportunity for a quick photo session. 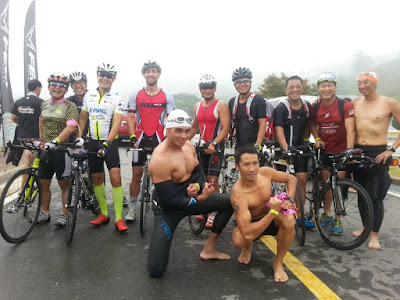 And then later that day we went to deposit our transition bags and attended the reception dinner for the participants. We took the opportunity for another photo session, especially to show off our T-shirts sponsored by Ultron. 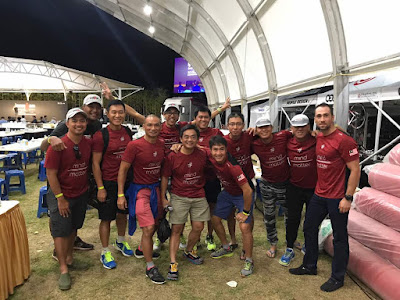 Back at the hotel room, the plan was to sleep early, as I had planned to wake up at 3:30am the next morning to prepare for the race. But I could hardly get any sleep, as I kept thinking about the 3.8km swim in the Lake...