I research and experiment extensively on running, and way too many people have approached me to seek the magical formula to improve their performance in running. In fact, I’m a mentor to many of these people; which is quite an irony, because I have no formal training as a coach, and neither am I a fast runner!


The one thing that puzzles me about most of them is that the vast majority have no clue whatsoever about racing strategy. In my opinion, many of them can do much better than their current PBs, but the main stumbling block that prevents them from achieving better results is that they almost always run way too fast at the beginning of their races. I’m seeing some of these people run race after race, repeating the same mistake, and they just don’t know what’s hitting them!


Armed with knowledge and a keen sense of racing strategy, one would expect me—of all the people in the world—not to fall for the same mistake, but that’s exactly what happened in the Gold Coast Airport Marathon. But it’s not the kind of mistake of not knowing the significance of racing strategy; rather, the mistake of putting at stake my chance of a PB for the sake of greed.


Earlier this year, I was training for the New Zealand Ironman, an ill-perceived move on my part. I had insufficient training, and then my friend who was supposed to race with me had a bike accident and had to withdraw. In the end I went alone, with whatever little training that I had, and had to struggle to finish the race in a miserable 15:32. One could almost say that it was a “successful failure”!


Anyway, because of the limited time I had during the Ironman training, my focus was mainly on endurance, and hardly on speed. After the Ironman in early March, I began to work on my speed around mid March, and I reckoned that I should have enough time to gradually build up speed to the Gold Coast Airport Marathon on the first Sunday of July. I was hopeful that I would achieve a PB in that race. As the weeks and months went by, I could feel my speed improving. I could run 10km-15km at 5:30min/km pace fairly comfortably. And by June, I could run 5:00-5:15 mins pace for 10km-15km comfortably. Things were looking very good indeed. I was very confident and I felt that I had a good shot at improving on the 3:52 I set in Hong Kong last year.


My friend, Lim Young Peing, went to Gold Coast with me, and he was also hoping to achieve a PB. We arrived on Friday morning, and then went to collect our race packs together. It was such a grand event, and so many people at the expo. We each received our bib and a goodie bag, but without any goodie in it!


I was walking around in the crowd after collecting my race pack, and then Karen Loh of the MWM’s fame greeted me. The truth is that I seriously doubt that she knew me, but was merely being friendly. I guess “Malaysian” was written too plainly all over my face, you see. I did not let it go to waste though—it’s not always that a pretty and sexy young woman would greet a nerd like me. I turned to Lim and told him that that was Karen, as if we’ve been buddies for a long time! I can’t remember if I had walked with my eyes on my forehead after that. I must ask Lim about that later.


I ran about 3km on Saturday morning and felt very good. I was ready for a great race. The next morning saw me at the start line of the Gold Coast Airport Marathon. I found my place in section B meant for sub-4hour runners. Temperature then was about 10C, but it wasn’t as biting cold as I had initially thought. At the flag off, I started cautiously—I ran the first 5km at a very conservative average pace of 5:20min/km. In fact, it was so comfortable that I hardly broke a sweat. I was thinking that I would surely achieve my PB if I could maintain that pace; and it almost felt like it was too easy to maintain that pace too! I continued running more or less at that pace up to 10km, and I was still feeling very fresh.


Then the tragedy—the evil that has always been the culprit that had destroyed many strong men of this world—I was overwhelmed by greed . Seeing the red balloon depicting the 3:45 pacer coming back from the turning point, I began to wonder if instead of just beating the 3:52 PB, maybe I might even have a shot at 3:45? That would be a fantastic icing of the cake. After all, even before reaching Gold Coast, I've been contemplating that 3:45 all the while. Could it be possible? I was feeling fresh running the 5:20min pace for 10km; I had all my nutrition and hydration schedules executed according to plan. It was a flat course. The 3:45 finish seemed like something too sinful to miss at that stage!


And that was the turning point of the race for me; I fell victim to greed and began to chase after the forsaken red balloon. I maintained a pleasant 5:10min average pace up to 15km, 20km and even up to 25km, still feeling good. Was it something that I had eaten the day before? Did some magical bio-chemical reaction happen in my body? It just seemed too good to be true!


Well, you know what? It was indeed too good to be true! At about 28km into the race, I suddenly felt my left quads seizing up, followed just a few seconds later by the right quads. I knew then I was in big trouble. I was forced to slow down a bit. I arrived at the 30km point in about 2:38, but although that was a decent timing, I realized that the remaining journey to the finish line would be hell for me. The cramps in both quads were hell. Suddenly the race turned into a nightmare.


Well, what remained of the race was not a pleasant experience. I ran with plenty of walks in between. A lot of torture. It’s been such a long time since the last time I experienced such a torture during a marathon. It kinda reminded me of the first few marathons that I had run. In the end, not only did I fail in achieving 3:45, but not even the 3:52. Instead, I finished in 3:56:51. Although that is still a decent finish, I must admit that I’m disappointed. My disappointment is not really because of the failure of achieving a PB. I have long accepted that I can’t possibly achieve a PB in every race that I join. Rather, I’m disappointed because I allowed myself to become overwhelmed by greed. But then again, I’m walking away from the Gold Coast Airport Marathon with a lesson learned the hard way. I will be back again; and I will achieve my PB one way or another!


In all this, at least my friend Lim achieved his PB. He improved from 4:50 to 4:47. A small improvement, but still nothing short of spectacular all the same! 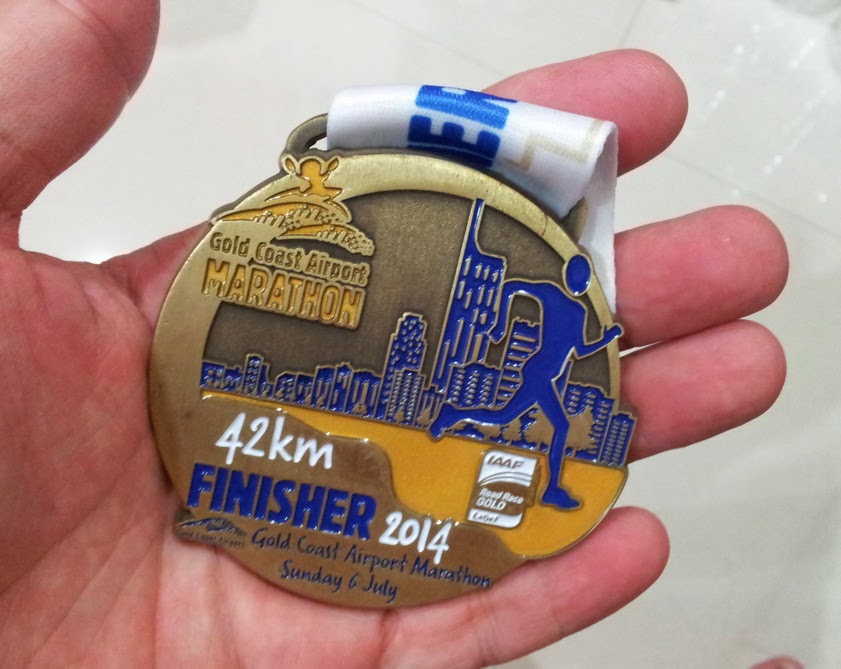