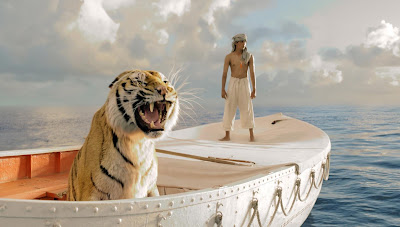 As a general policy, I would refrain from reading reviews on movies I haven't seen yet, but which I may want to see in the future. But of course there will be trailers and teasers which may emerge unexpectedly during commercial breaks on tv; or perhaps reviews published in the papers in the entertainment section. So obviously, sometimes it's quite impossible to escape from getting at least a general idea what a movie is about, although perhaps not very much more.


Such was the case with the movie entitled Life of Pi. In fact, I dare say even a total idiot can guess, based on the many versions of pictures accompanying the advertisements of the movie, that the story has something to do with a guy stranded on a lifeboat with a tiger in the ocean.


Well, I'll be honest here—my curiosity got the better of me when I saw a review on the movie in the local papers recently, and I committed the sin of breaching my own policy by stealing a peak at a paragraph—just one paragraph, mind you!—and learned that a major part of the movie was actually scenes of a boy and a tiger on a boat in the open ocean. That, however, wasn't really a big revelation to me, as I had expected that's what the movie was about anyway. But that was quite enough to put me off. I mean, how boring can that be? Just a boy and a tiger on a boat for over an hour in the cinema, for goodness sake!


Nevertheless, as fate would have it, I found myself at the Growball Cinema in Centrepoint one weekend, and decided to unwind by watching a movie. Browsing through the movies on offer then, two caught my attention. One was the seemingly never ending saga of vampires and warewolves, of which I'm just not a big fan of the hairstyle of that sissy vampire named Edward Cullen. And the other was Life of Pi.


I'm sure you must have guessed it by now; I chose Life of Pi because of a hairstyle. I was willing to spend about one-and-a-half hours watching a boring scene of a boy and a tiger sharing a boat at sea, instead of a ridiculous hairstyle.


So anyway, without giving too much away (just in case if there are still some of you who haven't seen the movie out there), I found the movie quite good after all! That's rather strange, because I could think of nothing very interesting about seeing a boy and a tiger on a boat for over an hour. But I was wrong; I was stuck to my seat, wanting to know what's coming next. And then next; and next. It reminds me of the situation that can arise when reading a very interesting book—one would be willing to forgo food and endure hunger for wanting to read the book to the end!


But here's the thing about knowing very little about the movie. As it gradually progressed, I realised that it's longer than one-and-a-half hours. The suspense was killing me; I was at the edge of my seat, wondering when it would end. One hour forty-five minutes, and it's still not finished yet, oh for Pete's sake! No, it went on to about two hours before it finally ended!


Even two-hour long, it was still not a boring movie; and I would therefore recommend to my readers to watch it, if you haven't already! I think the message that the writer is trying to send to the viewers is very profound and meaningful; even spiritual!

Just be sure that you don't have a full bladder when you're watching it. Two hours can feel like an eternity even if the movie is exciting, I tell you!

i watched it last weekend.
So which version do you prefer? and Why? hehe

I prefer the version with Richard Parker much more than the other, because that version involves more elements other than just "surviving at sea". It shows the creativity of the human mind in the face of extreme difficulties; the seemingly impossible may be possible under some circumstances. More to the point, it shows that when one does not give up, there is almost always a way to solve any problems. This version, I think, is more meaningful, even if not realistic!

The only problem is that some people want only a scientifically logical version.

Either way, it's still a good movie to watch. If only I did not have to suffer holding my pee for what seemed like forever! When the movie had ended, I felt like everybody deliberately walked so damn slow, and I had to endure the extra few minutes before I could relieve myself at the toilet! It wasn't amusing - that!

i vote richard paker version too :)

I watched it twice... Never bored at all... A lil bit touched by the love and bonds between a mother and his son, his father taught him well to toughen him and to survive the extreme harsh I Should Have Died condition...

This adapted from a novel movie was awesome... Full of messages... I love the famous tagline, "Above all else, don't lose hope!" =D

Yes, eezard_vazz, it was indeed a good movie.

"Above all else, don't lose hope!"

That's a very powerful line. But I've always said to people who're willing to listen to this old guy, that not everybody is entitled to rely on that tagline. All too often people are inspired by such a tagline and then dare to dream big dreams to achieve greatness, and they don't lose hope.

You see, that tagline is only half of the deal. The other half that is too often not sufficiently emphasized is that big dreams must be supported by hardwork if to see fruition. Too many people have big dreams, but put very little effort to realise those dreams. They sit still waiting for that day to come; they don't lose hope.

But anyway, as I said, I enjoyed this movie. But I was miserable because I was holding my pee for what seemed like eternity!