It's been a couple of weeks since The Most Beautiful Thing (TMBT) in mid-September, and we haven't done much of a decent hill training. Several of us have registered for the Vibram HK 100km in January next year. And unfortunately, January is not very far away. So it's time to kick-start our hill training again.


Mia, Hana and I found ourselves at the now famous starting point at Jalan Kipouvo-Madsiang a few kilometres from Penampang last Sunday morning for a scheduled 7-hour hill training. It was a mere 30km workout which would take us from Kipouvo up the hills, and then down to Inanam on the other side. We would then turn back at Jalan Kionsom; but would then make a detour of about 4.5km (return trip of 9km) at the fork, up to the hanging bridge.


Hana was probably still half asleep that morning and had trouble locating the junction to Jalan Kipouvo-Madsiang. I had to wait for her at the main road to guide her in to the spot where we eventually parked our cars. It was a lovely morning that promised a bright sunny day.


The start was a good 2km of undulating and winding asphalt road before breaking off to a sharp uphill climb on a narrow concrete driveway. At first Mia was ahead by several metres. Hana and I were talking; or rather, I was doing most of the talking, and Hana was mainly listening. However, about halfway up the hill, Mia became increasingly slower, and both Hana and I eventually overtook her. Hana went ahead while I waited for Mia.


When I reached the top of the hill, Hana was already seated on a shaded resting place waiting for us. Moments later, Mia arrived and together we took a few more minutes resting. The view from that point was awesome—we could see KK from afar; rolling hills of green on a beautiful sunny day. 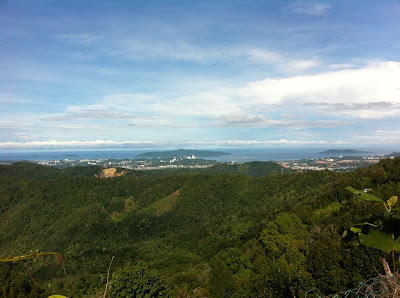 The next section of the workout was a pleasant downhill trek of gravel road all the way to Jalan Kionsom. Mia took the opportunity to run ahead of us again. But when we hit the flat asphalt road at the bottom of the hill, I started my brisk-walking routine and surged ahead, though still keeping both the ladies within sight.


We finally arrived at the tuck shop just at the junction at Jalan Kionsom where we had planned to refill our bottles. We decided to treat ourselves to fresh coconut water. Then Mia went to use the toilet; and while Hana and I were talking to each other, a handsome chap named Billy came along.


I was kinda hurt that Hana was obviously attracted to Billy. I suspect it must have been the awesome beard that did the trick; or perhaps it's those pleading eyes, but whatever it was, Hana was moved to take out her phone to take a photo of Billy.


As if sensing that Hana was obviously charmed by his dashing looks, Billy drew closer to Hana... 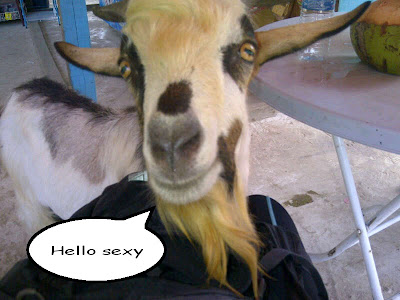 That's the thing about relationships—sometimes if the chemistry is right, you just know it clicks right away! I'm not sure if it's because of Hana's sexy outfit or pretty face, but immediately after she took the photo, Billy was eager to know if it's a good shot. See for yourself what happened next... 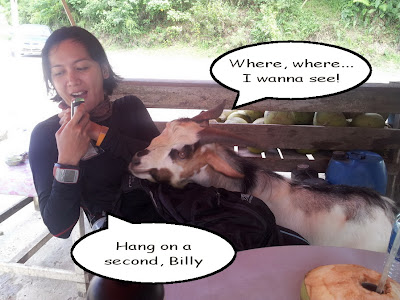 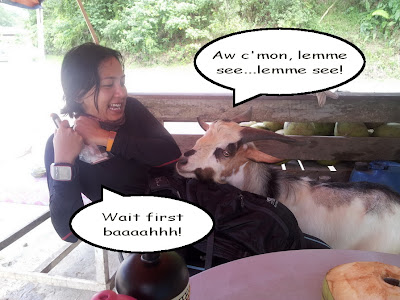 All the while, my frustration and jealousy grew steadily until I lost it. I had to break them up so that we could continue with our training. And maybe because I was too upset seeing Hana and Billy flirting with each other, I forgot all about having to pay for our drinks! We were already several metres away, when the nice young woman shyly reminded us that we haven't paid yet! It was an awkward moment, but I had to turn back and duly paid up before making our return leg to the hills. I could see the sadness in Hana's eyes (don't worry Hana dear, we will be coming back here again, and you will meet Billy again, I promise).


The sun was already up high in the sky by the time we passed that same stretch of gravel road again. Hana, perhaps because of her frustration, charged up the hill in her famous turbo briskwalk fashion, and left Mia and I behind. I had to stop many times to wait for Mia; she was obviously struggling up the hill.


The walk to the top of the hill took about an hour. By the time I reached there, Hana had already spent quite some minutes waiting for us under the open-sided shed. I joined her and together we waited for Mia who arrived shortly later. From that point, the plan was to make that 4.5km detour to the hanging bridge. But Mia said that she felt tired and didn't think she had the energy to make that detour. I could see the quick spark in Hana's eyes as she quickly agreed to abandon that detour plan, and go straight back to our cars instead. So all of us duly made our way down the hill, stopping briefly on the way to take this photo. 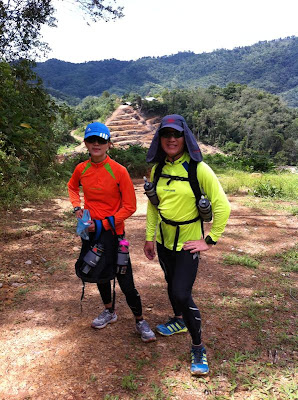 Well, we made it back to our cars for a total workout of about 5 hours only, instead of the intended 7 hours. In the end we only did 21km. Obviously it didn't go according to plan, but it's probably a blessing in disguise—maybe we shouldn't push it too far after a long break; I guess it's good to allow the body to build up the momentum again.


We then drove to Wan Wan for lunch where I tried my best to cheer Hana up, as it was obvious that she was still missing Billy heaps. But after a bowl of (ka-liao, ka-mien) kon-lau mien, Hana was all smiles again.


In the coming weeks, we will be back again a few more times to these hills, gradually building up the distance to include the Kasih Sayang leg in Kokol. I can almost feel Hana's excitement...

Some of us are going for the TMBT next year. Can you be our "tour guide" up the hills if a few of us decide to go there for a one off look see look see training run? We looking at around March/April period.

The hills where we train are no where near as beautiful as the actual TMBT route. We basically train at some of the village roads near KK, but the actual route of TMBT is much further away in the interior.

However, you should bear in mind that the two TMBTs so far had different routes. TMBT1 was, in my opinion, much more technical in that it had many hanging bridges; even wading through waist-deep river. No drop bag service at the midway point. Plenty of brutal hills and a good dose of jungles. There were some portions of the race which I thought was a bit risky, e.g. going through narrow footpath high at the edge of a river. A slip could mean a long fall to the rocky river below. The dense jungle of Miki Camp was also technical as it was quite a maze, especially if one carried poor lighting. The route also had some criss-crossing and could become quite confusing to those who're not so good in orientation.

TMBT2 was, in my opinion, much more friendlier in terms of its technicalities, but more brutal in terms of hill climbs. There was also drop bag service where you could pick up extra supplies at the midway of the race. It meant that you could carry slightly lighter bags for the first half of the race. You get plenty of magnificent views of the majestic Mt Kinabalu in a much friendlier racing temperature; and it showed in the marked improvements in finishing times for many of those who did the TMBT1.

Although I liked both challenges (as both had their pros and cons), I like TMBT1 much more, as the course had many more challenges as opposed to just brutal hillworks. However, in terms of organization of the event, TMBT2 was anytime better than the first!

The organiser has not revealed the route for TMBT3, but I have a feeling it may include a great deal of what we had in TMBT1. Meaning perhaps a little less of Mt Kinabalu's views, but plenty more of fun in terms of a real trail adventure.

Either way, whether it's TMBT1 or TMBT2, you can be rest assured that the hills in Singapore is nothing like the hills you will get in the interior of Sabah. Take the highest hill in Singapore and times that with say 10 folds, then perhaps you'd be closer to the mark.

I can't commit now for a tour to the hills around March/April, but I will try to arrange with some friends.

Oh the place you guys train is not the same place as the race? Like that kinda no point going there to run. We wanted to get a feel of the actual race terrace. We save the money for the actual race then