The Art of Proposals & The Dying Fire

It must have been a little over 19 years ago when I proposed to my then girlfriend, Euphemia. It was one of the most awkward moments in my life, really, as I was proposing over the phone from a different country. We've been going steady for about 3 years, but I had actually decided much earlier than that, that this was the woman for me.
It took me quite a while, however, to come up with the courage to propose, and when I finally did, I was at a loss on how to do it! It was of course a special occasion, and it seemed only natural to do it in a way that's nothing short of extraordinary. But for the life of me, in spite of my brilliant creative mind, I had to crack my head, and still ended up at a dead end! It was rather pathetic that all I could think of was to propose over the phone.
Looking back now, surely there were many, many choices? I mean I could've spent all my savings to hire a small plane to fly with a banner that says "WILL YOU MARRY ME, EUPHEMIA" over the Tg Aru Beach or something like that. Perhaps challenge her to a bungee jump, and just when about to jump, I could've popped the question there and then? Or maybe I could've tried something fancy like bringing her up to the Yayasan Sabah rooftop, get down on my knee and propose that way, just before the security guards arrive to chase us off the area? Hell, I can think of so many ways to do it now!
Instead, I did it over the phone! And just for a few seconds, my heart sank when Mia merely laughed and laughed at my proposal! I mean—was it really that funny? But thankfully in the end she said yes! So that's the sad story of how unsophisticated the way I proposed to my girlfriend all those years ago.
Over the years, people are becoming increasingly creative with the art of marriage proposals. It's no longer enough to utter those few simple words, "Will you marry me?". One has to do it more dramatically; in a special venue, and even to the extent of faking injury as in this story, extracted from our local papers during the recent Valentine's Day celebration (click on picture to get clearer view). 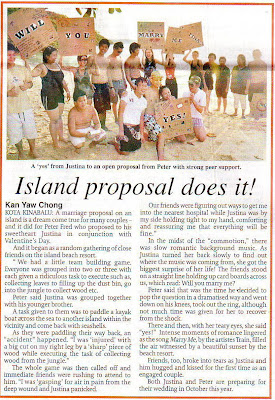 We have come a long way to master the art of marriage proposals. Whoever attempts to propose without extraordinary or theatrical approach would be at risk of accusations of being unromantic and unimaginative! Such is the extent of the mastery of marriage proposals.
Unfortunately, we have not mastered the art of keeping the fire going. Two days ago, after almost 18 years of marriage, my brother, Dennis, and his wife, Shidah, are now officially divorced. Last week, Typhoon Diana, the born life organiser, instructed me to make a last bold bid to stop the divorce by trying to talk to Shidah. I did nothing of the such, of course. For better or worse, I'm sure they have both considered their decision.
Apparently, Dennis said that both of them have changed. I was somewhat surprised that Dennis did not see it coming. Changes are almost inevitable in everybody; it's strange that he only realised that recently. After all, women are not usually easy to understand. You marry them and set up a nice little routine of kissing them every night at bedtime, for example, but sometime in their forties, they suddenly develop the habit of applying lotion, and their faces become off limits to kisses. The only way to deal with changes is to adapt. And adaptation is in itself a skill. But it's not something that everyone can learn.
No, it doesn't seem like we're gonna master the art of keeping the fire going anytime soon. If anything, it seems certain that the divorce rate will be increasing as reported here. If it were me, I'd rather we learn to master the art of keeping the fire going, and not so much the art of marriage proposals, but I guess that's just wishful thinking.

Cornelius,
Interesting topic you brought up in your blog.

You are right to say "Change is inevitable" either in a marriage,courtship, the work place,the way we work etc..

There is another new word that is taking the world by storm - transformation. Companies, politicians and even churches are talking about it as it is affecting the country in one way or another.

However, there is another human virtue, tolerance, which is important as well when it comes to keeping the fire burning in a marriage or relationship.We may notice or find out about our spouse's real life behavior after the honey moon is over with along lifetime ahead. How to endear going the long period of marriage unless we tolerate and accept our partner's faults and shortcomings.

Let me use my own personal experience to illustrate.After a few months of marriage,I started to see and find out the little faults and shortcomings of my wife which I have never noticed before during our courtship.I sought the advice of my late mother (it was more like I was complaining about her to my mom).

My late mother in her wisdom answered me with this quote which I hold on to ever since. She said "Your wife is selected and chosen by you,you have to settle the problem yourself".

It was only much later that I managed to see and understand the wisdom of her answer.She was not taking anybody's side (my wife's or my side)and it was left for us to settle any marital problems we have by ourselves.It would have been so easy and it is quite common for the mother to take the son's side against the daughter-in-law but she didn't.
Just my new Malaysian 20 cent piece!

There is of course no question that tolerance is an important element in a successful marriage. But everyone has his or her limit. And quite often, tolerance may even be taken for granted by the other party!

I've seen in my day a husband who's almost forever drunk, and the wife endured for years. At some point, one has to ask the question if it's worth to tolerate such a person. So, yes, we try to tolerate some of the weaknesses of the spouse, but again, there is always a limit!

I see for example my own parents. I can't imagine how these two very different people actually got married years ago. But I think their divorce after about 12 years of marriage was the best thing that could happen for both of them. The downside, of course, was that we children shared the lousy part of the deal!