It must have been around 3:30pm yesterday when one of my staff, Edward, came to my door to say that someone's about to jump from a nearby building. There was already a commotion on the other side of the general office where we had a window with a clear view of the poor fellow. I rushed to the window, and true enough, there he was, a bald-headed old man, standing on the ledge of Wisma Jubilee, which is just a stone's throw away from our Menara MBf. 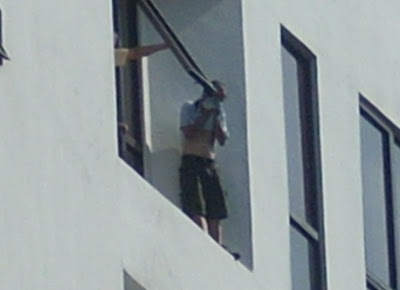 I don't know what's his problem, this guy—maybe he lost heavily in Gin Rummy or Chap Gee Kee over the Chinese New Year holidays; maybe he lost his winning ticket for a lotto 6/49 jackpot; or maybe his wife has been depriving him of sex for far too long, and he's just so tired of having sex with himself. But, well, he decided to bid adieu from the 11th floor of Wisma Jubilee. 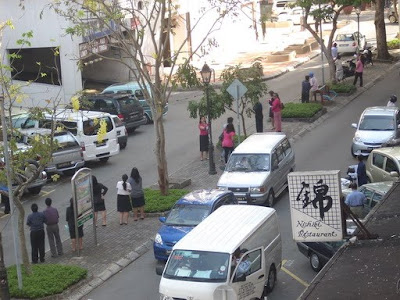 Of course within no time at all, the crowd of onlookers was quickly building up on the ground. I mean, it's not always one gets to see such a real-life scene. As the drama unfolded, a good samaritan was seen at a closeby window, apparently trying to pacify the fellow. Maybe he was telling him that the winning lotto ticket was not worth it (It's worth only a few million bucks; it's just money, you see); maybe he was telling him that the wife was not worth it, because she's fit to be The Biggest Loser participant. But anyway, the fellow on the ledge was not biting. He was adamant that life's no longer worth living.


So there he was, wiping his face and seemingly trying to muster all the courage he could to make that big plunge. He appeared to be counting one, two, three... as his body rocked to and fro. And everyone held his breath. But each time he seemed to have made up his mind to leap, he pulled himself back again.


When all else fails, and everything seems to come to a climax, there is always that inbuilt survival instinct somewhere in the human brain that will prevent one from taking his own life. And so as he kept wiping his face and swayed forward over and over again, the onlookers were biting their finger nails.


There's something about looking at someone standing on a ledge of the 11th floor without any safety net at the bottom. This was not a scene from a James Cameron's thriller. This was the real thing, I tell you! And seeing the fellow moving on that ledge made me feel unsteady. My knees became soft like jelly. I actually felt the hair at the back of my neck rising one by one, even though I just had a haircut the day before, and I had all of the hair there duly shaved. I heard myself saying, "Oh for Pete's sake, just jump and get it over with!"


Someone came up with the original idea of placing a mattress on the ground where the man would land if he had jumped. A mattress? To cushion the impact of a man falling from the 11th floor? Yeah right, I'm sure that's a brilliant idea—talk about dealing with emergencies! Bah! Where are these creatures from? They absolutely drive me up the wall, you know.


And then, after what seemed like eternity, we heard the siren of a police car approaching. From it emerged some personnel in neatly ironed uniforms, and perhaps some newly applied make-up for the cameras. Not to forget a bunch of firemen in full uniform and big boots, all rushed into the lift—I fancy that they got stuck for a moment at the door of the lift—and soon found their way to the window of the 11th floor where the man was still deciding whether to kill himself or his wife.


A bit of conversation took place. But it still did not seem to work. And then suddenly one of those uniformed men reached out to grab the man's shirt. The latter was startled and tried to jump. But by then another pair of hands reached out to grab his hand. He jumped anyway, but because of the strong grip from those men in the window, he did not quite leave the ledge. Instead, only his legs ended up dangling from the edge. And that just set a chorus of "aaahhh!" and "ooohh!" from the crowd on the ground. Within a split second, one of the glass windows was broken and yet another pair of hands stuck out to grab the dangling man. And by the way—no, there was no mattress placed on the ground floor below the window.


Well, he was eventually pulled in, and the crowd was ecstatic. They gave a huge round of applause as if seeing an elephant successfully picking out number 7 from a set of 12 numbers arranged in a circle in a circus show (How do they train the elephants to do that anyway?)


After the man was safely in the building again, a policeman emerged from the window and showed what I think was a thumb's up to the crowd below. Or was it the middle finger?... I couldn't tell as it was quite high and far from where I stood.


Moments later, the bald-headed man emerged from the main entrance of the building on the ground floor, restrained by the policemen, and all the cameras went clicking frantically. It's also noted that by then the man had no shirt on. It could have been torn during the struggle, or maybe one of those policemen kept it for souvenir, I don't know. He was pushed into the police car and the crowd began to disperse.


So now my mind is clear to investigate who was the person who suggested to use a mattress on the ground floor. I really need to ask him or her if it should be a single bed or king-size mattress.
Posted by Cornelius at 10:17:00 PM

OMG Cornelius you are an excellent writer!! This was terrifying and hilarious to read all at once! LOL

I think he lost big at the Resort World Casino at Sentosa. But seriously, don't the fire brigade or emergency rescue service in KK has air mattress?

It's kind of a curse, I tell you. I sometimes can't control myself from including a bit of humour in my posts. Well, at least some people are entertained!... haha!

I'm not too sure about air mattresses in our local fire department. Maybe it has a lot to do with budget cuts, you know. Besides, if indeed they had the air mattresses in their store somewhere, it would probably take them at least half an hour to read the user manual before they can set up the damn thing below the window.

On second thoughts, don't the fire department at least have a round shaped tarpaulin to catch whoever is jumping down or falling down from high buildings?

Remind me of the Charlie Chaplin soundless black & white movie where the keystone policemen were supposed to be waiting at the ground floor with the round-shaped tarpaulin to catch whoever is falling down from above.It is even more comical and hilarious if they put a big "X" in the centre of the tarpaulin so that whoever is jumping down knows where to aim for the landing or big drop from above!

This was very entertaining! I was glad it didn't have a gruesome ending though.

Perhaps in other situations, e.g. when rescuing fire victims trapped in tall buildings, it would have been a good idea to use, say, the air mattresses. However, when dealing with someone attempting a suicide, I don't think it's wise to use them.

From the psychological point of view, the idea is to "delay" the suicide attempt. Hence the rescuer might try to talk to the subject, perhaps hoping to make him change his mind. Bringing out the air mattresses is akin to a provocation in my opinion. Seeing the rescuers setting up the air mattress on the ground might only make the subject decide even faster. He might see his chance to execute his plan drifting away, and therefore might act on it even quicker.

Of course it could have been worse in the end. But I'm thinking if it's really over. When someone is bent on taking his own life, can we really stop him from doing so?

If ever I want to commit suicide, jumping from a tall building would be one of the last of my choices. I'm thinking perhaps I'd still do it by the overdose of sleeping pills approach. One simply falls into a deep sleep and does not wake up. No pain and no rush of adrenaline. No disfigurement and hence I'd still look pretty in my coffin. HAHAHA!